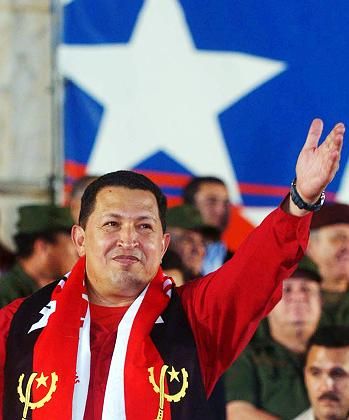 Holland and the Caribbean Sea are linked by their colonial past. And it's a past which continues to spawn political conflict even today. With animosity between Venezuela's left-wing Chavez government and the United States of President George W. Bush high, the Venezualan president is accusing the Netherlands of allowing the US to construct military bases on the Antilles islands of Aruba, Bonaire and Curacao -- which are formally part of the Netherlands and separated from the Venezuelan coast by only 40 kilometers of ocean. Speaking in "Aló Presidente," the weekly television program he uses to addresses the nation, Chavez suggested the US may want to use the Antilles Islands to invade Venezuela.

Chavez has been claiming for some time that the Bush Administration is planning an invasion of Venezuela "We have detected with intelligence reports plans of a supposed invasion," Chavez said in a BBC interview last October, calling the Bush administration "an imperialist government."

Speaking on "Aló Presidente" last week, Chavez accused Dutch Defense Minister Henk Kamp of having transformed himself into a "Washington stooge." In fact, the Netherlands are hosting an annual international military manoeuvre on the three islands, the "Joint Caribbean Lion 2006," at the end of May. The manoeuvre involves the deployment of roughly 4,000 soldiers and the US Navy is deploying a number of warships, including the USS George Washington.

Chavez's remarks on "Aló Presidente" triggered a minor spat between Chavez and the Netherlands, with some hawkish Dutch politicians suggesting those remarks may have been a veiled threat against the islands. Kamp himself said in a parliamentary debate that Chavez was looking "with big eyes" at the Caribbean, according to the Associated Press news agency. Chavez has dismissed the suggestion that his country has territorial ambitions on the Antilles, and the Dutch have said they are satisfied with this response, according to AP.

Chavez has been investing abundantly in his country military's resources during the past months, purchasing 100,000 Kalashnikov rifles and 33 military helicopters from Russia. Last Wednesday, Venezuela's Foreign Minister Ali Rodriguez told AP that the US wants Venezuela "defenseless from a military point of view," and that the USA would certainly attack Venezuela given "the right conditions."

Hugo Chavez was elected president of Venezuela in 1998. He has repeatedly accused the USA of organizing a failed coup to oust him in 2002, as well as of funding opposition groups. The US State Department routinely denies these accusations.