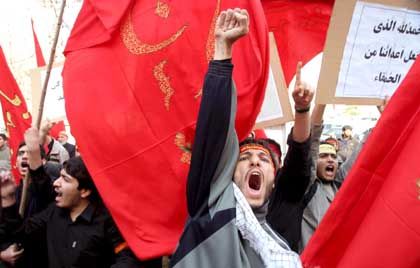 Demonstrators gather in front of the Austrian Embassy in Tehran on Monday.

The ripples of the cartoon controversy continue to be felt in a number of Muslim countries across the world. Afghanistan has seen the worst violence so far, with reports of up to six deaths. On Monday four protesters were killed when over 1,000 people tried to attack the US military base at Bagram and clashed with the Afghan police guarding the base. Another two people are reported to have died during clashes at a demonstration in the city of Mehtarlam, east of Kabul. In Somalia a 14-year-old boy was killed when policed fired warning shots at an angry crowd demonstrating against the cartoons.

In Beirut a man is reported to have died from his injuries after he jumped from the burning Danish consulate on Sunday. There are also reports in the Italian media that the murder of an Italian Catholic priest in Turkey on Sunday may be related to the cartoon dispute. Turkish foreign minister Abdullah Gül criticized the violence around the world and said that a free press was necessary, but "this does not mean that everyone is entitled to say or write anything, without any limits, or do whatever comes into his mind without considering the consequences."

In the Pakistani city of Peshawar, near the Afghan border, around 5,000 people took part in a demonstration led by the province's Chief Minister, Akram Durrani. Pakistan's doctors have called for a boycott of medicine from European countries.

The government of Chechnya has announced a travel ban for Danes. "We will not allow those in who play with the feelings of 1.5 billion people," said government chief Ramzan Kadyrov. He also accused Denmark of having always been a provocateur. 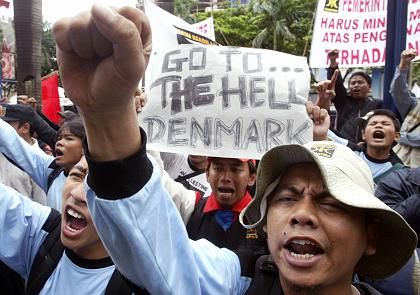 Indonesian protesters in front of the Denmark embassy in Jakarta.

The protests have even spread to the predominantly Catholic Philippines, where only 8 percent of its 85 million inhabitants are Muslim. Five thousand people demonstrated in the southern city of Cotabato, burning the Danish flag and calling on President Gloria Arroyo to cut off all ties with Denmark.

The Danish government has expressed concern for the safety of its citizens, having already warned them against travelling to 16 Muslim countries. Now its ambassador to Indonesia, Geert Aagaard Anderson, has appealed to all his compatriots to leave the country and for any planning a holiday there to cancel their trip. The Danish embassy in Jakarta came under attack over the weekend. Indonesia is the country with the highest number of Muslim citizens in the world.

As Iran announced that it was cutting all trade ties with Denmark, the Danish foreign minister, Per Stig Moeller, said that he would hold Tehran responsible for the damage to its embassy in Iran, after several hundred protesters threw stones and fire bombs at the building on Monday. Protestors also attacked the Austrian embassy in the city, throwing stones and attempting to burn it down, and setting fire to a German flag outside. The Iranian press seems keen to stoke the flames of the controversy. The right-wing daily Hamshari has announced an international competition to find the most suitable images satirizing the Holocaust.

Along with Denmark, Norway continues to bear the brunt of the Muslim anger. A Norwegian publication was one of the first outside of Denmark to reprint the 12 cartoons of Muhammad. Oslo has demanded compensation from the Syrians after its embassy in Damascus was set alight by a mob on Saturday. In Afghanistan Norwegian soldiers manning an army checkpoint in the north-western city of Majmana were attacked by an angry mob. They threw stones at the soldiers who then used teargas to disperse the crowd.

Many western leaders have expressed understanding for Muslim's outrage at the cartoons, while also attempting to distinguish between those Muslims who feel offended and those who partake in violence. Washington has called on governments in Muslim countries to take steps to calm the situation. White House Spokesman Scott McClellan said: "We condemn acts of violence wherever they occur in relation to the concerns over the cartoons, and that's why we urge all governments to take steps to lower the tensions and prevent violence." The US criticized the Syrian government for not protecting the Danish and Norwegian embassies in Damascus and it also accused them of backing the protests both at home and in Lebanon.

German Chancellor Angela Merkel has called for a dialogue between the two cultures, while also calling on the West to clearly articulate its own values. She said that the divide between the Western and Islamic cultures had to be bridged. "We are ready for dialogue. We have our convictions for which we are also responsible." She went on to condemn the violent protests, saying it is not acceptable for violence to be used when feelings are hurt.

The United Nations Secretary General Kofi Annan once again called on Muslims to accept the Danish apologies for the publication of the cartoons. He said he understood that Muslims were hurt but he could not justify violence, "particularly against innocent people."

Johannes Laitenberg, spokesman for the European Commission, acknowledged that the cartoons had angered Muslims around the world but he also insisted that "no grievance, perceived or real, justifies acts of violence such as perpetrated on the weekend."

Questions are now being asked about the pattern of many of the protests so far. Cristina Gallach, spokesperson for Javier Solana, the European Union's foreign policy chief, said the demonstrations over the weekend had occurred in "very peculiar" places, including Iran, Syria, and Gaza. "What we have to ask is that Arab leaders, and Arabs themselves, who see the importance of having good relations with Europe and the Western world, come out and speak clearly about the importance of not letting the situation deteriorate to the point that the only one who suffers is moderate Islam," she said.