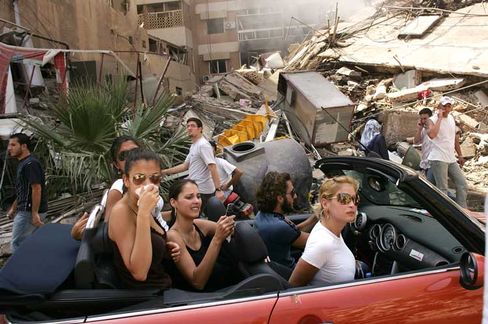 This photo won the World Press Photo Award for 2006. The story behind the photo is more complex than appearances suggest.

Bissan Maroun got a first impression of what international publicity means when she walked home from a cinema in her hometown of Beirut two weeks ago. Her mobile phone told her she had missed a huge number of calls. Then it rang again. This time it was her mother, who sounded hysterical: "Your picture is on all the TV channels," she screamed. "My children are famous."

It took a while before Bissan realized what had happened: A snapshot showing the 29-year-old driving through a suburb in southern Beirut in a convertible with her brother, her sister and two female friends had been selected as World Press Photo of the Year 2006.

"I want them to invite me to Amsterdam, to the award ceremony," was Bissan's first reaction. Her dream could actually come true -- the World Press Organization is currently deciding whether to invite the five young people to the ceremony in the Netherlands. It would be a first -- and it might have something to do with a guilty conscience about how the people were portrayed. Seldom has a war picture led to such vilification. "At first everyone said: That must be those rich, chic Lebanese visiting the poor neighborhood like a tourist attraction," Bissan says. "But that's completely untrue."

In fact the captions accompanying the photo in the world's press -- even before it was elected photo of the year -- were rarely sympathetic. Foreign commentators were incensed by the skimpy T-shirts worn by the girls, arguing such apparel was out of place in the conservative neighborhood. They commented on the disgusted expressions on the faces of those in the car, saying those expressions only showed the rich have no sympathy for ordinary people. And what about that car -- wasn't it the most blatant provocation towards the neighborhood's low-income residents? Bissam's acquaintances also began to whisper among themselves -- so much so, that she called in sick at the bank where she works. When her picture was awarded the World Press Photo Award, her boss advised her to make the true story public.

"We're from Dahiye, from the suburb, ourselves," Bissan explains on a hot February afternoon in Beirut. She, her 22-year-old brother Jad and her 26-year-old sister Tamara fled the neighborhood during the Israeli bombings. They stayed in a hotel in the safer district of Hamra and did what most Lebanese did at the time. They waited. The siblings met the other two women in the hotel, Noor Nasser and Lillane Nacouzi, at the hotel. Both are employees of the Plaza Hotel and were allowed to stay in vacant rooms during the war.

"It was so hot, and there were five of us in the small car"

On Aug. 15, the day of the ceasefire, Jad borrowed a friend's orange Mini Cooper. For weeks the siblings had heard nothing about whether or not their apartment block was still standing -- now that the fighting was over, they wanted to go and see for themselves. Jad drove and Tamara rode shotgun, while Bissan squeezed in between the two friends on the backseat, holding her camera phone ready. "We spoke briefly about whether we should really open the roof," she told SPIEGEL ONLINE. "But it was so hot, and there were five of us in the small car, so we folded it back."

Bissan admits that, at first glance, her excursion must look like a prime example of disaster tourism. "But look at our faces. They clearly show how horrified we were, how shocked," she says. "We were not cheerful." Today she can only laugh at the accusation that she and the other young women are dressed too salaciously. "This is Lebanon. We always dress this way," she says, adding that her clothes have never caused her any trouble with conservative neighbors.

It was about 1:00 p.m. and the young people were just on their way to their apartment when the photographer Spencer Platt spotted the orange convertible from the corner of his eye. He told CNN that he spontaneously raised his camera and pressed the shutter four or five times. Most of the pictures didn't turn out, he said, because some one walked into them. He admitted that the award-winning picture was the only one he could use. He never spoke to the five young people. Now he's sorry his photo has caused them so much trouble, saying he never meant to use it to make a political statement.

Catering to a Lebanese cliché

When it was first published, the photo caused a stir among war photographers. Many thought the picture was just too good to be true. There were rumors that the picture had been staged. The controversy continued when the photo received the World Press Photo Award and appeared in the papers once again. Lebanese photographer and jury member Samer Mohad vehemently opposed giving the award to Platt and spoke of an "insult" to all press photographers who had "risked their lives" reporting on the war in Lebanon.

The strong reactions prove that Platt has struck a nerve. He caters perfectly to a cliché about Lebanon that is not entirely unjustified. In fact Lebanon does see immensely wealthy people and extremely poor inhabitants sharing not just the same country, but also the small area of a few square kilometers that is Beirut. There really were rich people wearing expensive sunglasses -- mostly Christian or Sunni -- who sat, hookah in hand, in popular bars above the city watching the unloved Shiite neighborhoods go up in smoke.

The trouble is that Bissan and her companions don't belong to that group.

Bissan has only been able to enjoy the photo's success since her story has appeared in a few Lebanese newspapers. She has told journalists that her apartment was badly damaged, with all the windows broken and the furniture crushed by shock waves from the bombs.

Now she no longer gets reproachful looks from customers at the bank where she works. They bring in newspaper clippings with her picture instead. "My whole desk is full of them," she says. Journalist friends have warned her that he coming weeks will see her getting even more media attention. "But that will hopefully be over by the summer," Bissan says. That's when she is planning to get married -- quietly, and without too much publicity.