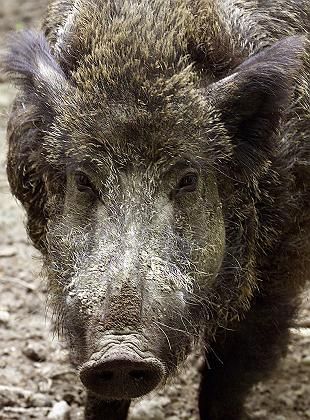 This one is friendly.

The trouble started shortly after 10 a.m. on Saturday morning when police responded to panicked calls from the residents of Veitshöchheim near the city of Würzburg in Bavaria. The boars had been fleeing from hunters and some had even swum across the river Main to escape.

Once they got into town they were frightened, furious and spoiling for a fight.

One of the boars smashed his way into a gift shop in the center of town. "The saleswoman got a huge fright and hid behind the counter," said local police chief Karl-Heinz Schmitt in a statement. "When the animal ran back out of the shop it knocked over a number of goods and caused damage worth almost €1,000."

After that the incidents multiplied and more police got drafted into town. One boar bit a 44-year-old man in the leg, another knocked a 76-year-old woman off her bicycle before colliding with a car and causing €5,000 of damage, police said. The boar died in the car accident.

Police opened fire on several other boars, killing three. "Only after two hours was the danger over," said Schmitt. "It wasn't your every day kind of incident."

Most of the boars were young and had only been born in the spring. They got into a panic after being driven out of a cemetery by local hunters.

Wild boars are usually peaceful unless they're cornered. The furry ancestor of the domestic pig is becoming an increasingly common sight in Germany. The boar population is growing because of a higher production of maize, which they like.