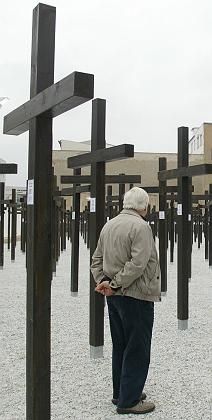 A Berlin court on Friday ordered this monument -- dedicated to those who died trying to cross the Berlin Wall -- removed.

It was late October 1961. American tanks, positioned at Checkpoint Charlie in Berlin, had their barrels lowered and ready to fire. On the other side of the line dividing the American Sector from the Soviet Sector, Russian tanks were likewise ready for battle. A jittery trigger finger would have launched World War III.

In 2005, the saber rattling has been replaced by a legal dispute over a makeshift memorial to the victims of East Germany's communist regime located next to the important Cold War symbol. This time around, there are no weapons other than lawyer's briefs and salvos. And instead of pitting the Soviets against the Americans, this battle is one of principle: Should Checkpoint Charlie be allowed to turn into a circus?

Court orders the removal of the monument

A Berlin court ruled on Friday that the memorial, which consists of a rebuilt stretch of the Berlin Wall located a few meters away from the site of the original and 1,065 brown, wooden crosses dedicated to those who died trying to cross the Wall, must be taken down. The nearby Berlin Wall Museum rented the land and manages the site. But the lease expired at the end of 2004 -- and the owner would like to sell the prime real estate, which is located in Berlin's upscale city center. Now, museum director Alexandra Hildebrandt has refused to dismantle the monument. Leading up to Friday's ruling, the case had wound its ways through the Berlin courts for months. 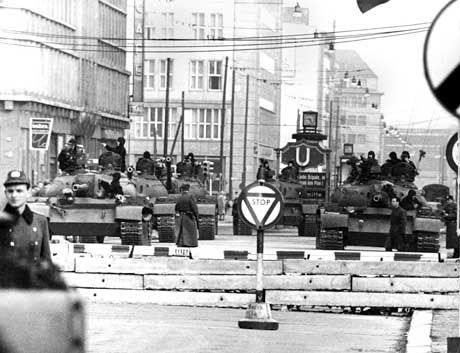 Berlin almost saw the start of World War III in 1961 with this tank standoff at Checkpoint Charlie.

Hildebrandt on Friday said she plans to first speak with her lawyers before deciding whether to comply with the court ruling or not. But in March, Rainer Schubert, who is associated with the Wall Museum, said that if anyone tried to tear down the monument, many would chain themselves to the crosses to prevent it. "We will make sure that the wall and crosses remain where they are," he told the Berlin daily Berliner Morgenpost.

The case has once again brought controversy to one of Berlin's most popular tourist attractions. Since the Wall fell in 1989, many have watched in dismay as the site has slowly transformed into a kind of Cold War Disneyland featuring souvenir hawkers selling a myriad of Soviet and American military items in addition to Russian fur hats and babooshka dolls.

A stripper posing as an East German secret policeman 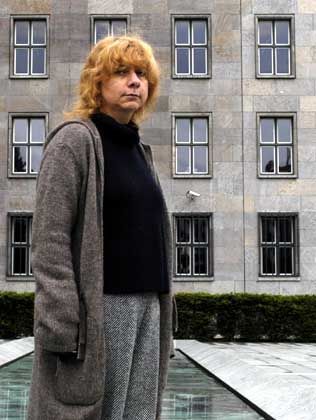 Alexandra Hildebrandt has been criticized by many for her management of the Checkpoint.

In June 2004, an "actor" began posing at the site in an East German secret police uniform and charging tourists for photos. The actor, a German-American named Tom Luszeit, was later exposed as a professional stripper. But despite her understandable disgust, Hildebrandt's reaction -- wrapping the small wooden hut that marks the Checkpoint in a blue tarp and silver duct tape -- was seen by many as over the top.

This episode too has cast a dim light on Hildebrandt's management of the site. Many in Berlin have criticized the current monument despite admitting that a central monument to the Wall and its victims should be discussed. One city official has said it "fills him with disgust," and another, Senator Ingeborg Junge-Reyer of the city's development office, said in March: "We are of the opinion that this installation is not appropriate for the site or for the victims."

But criticism of Hildebrandt is far from universal: Victims groups have lauded her for her attempts to focus attention on those who died trying to escape East Germany. Others see her as an important catalyst who has triggered a discussion on whether Berlin should plan a centrally located -- and permanent -- monument to the Wall.

Hildebrandt has said that she still hopes to be able to buy the site so her memorial can stay.