City workers take down a makeshift monument to the victims of the Berlin Wall.

Checkpoint Charlie. Just the name conjurs up images of Cold War intrigue, of US and Soviet tanks facing off and of the great, gray wall that divided Berlin for 28 long years. Amazingly, even today, with the city reunited and gaining a reputation as Europe's most edgy metropolis, the former American checkpoint remains a flashpoint -- the site of an ongoing battle pitting victims of the Wall against capitalists banking on the city's future.

On Tuesday, much of the drama spun to a rapid and rain-soaked conclusion, as city construction workers -- at the order of a Berlin court -- dismantled a make-shift memorial to those killed trying to cross the East German border from 1961 to 1989. The memorial stood just adjacent to where the checkpoint -- probably the most symbolic hut in the world -- once was and consisted of a kitschy field of 1,065 brown, wooden crosses and a rebuilt section of the Berlin Wall. Protestors, many of whom had spent time in East German jails and some of whom physically chained themselves to the crosses, charged that by dismantling the crosses, the city and the banks who wanted the land back were disgracing the memory of those who had suffered most under communism. 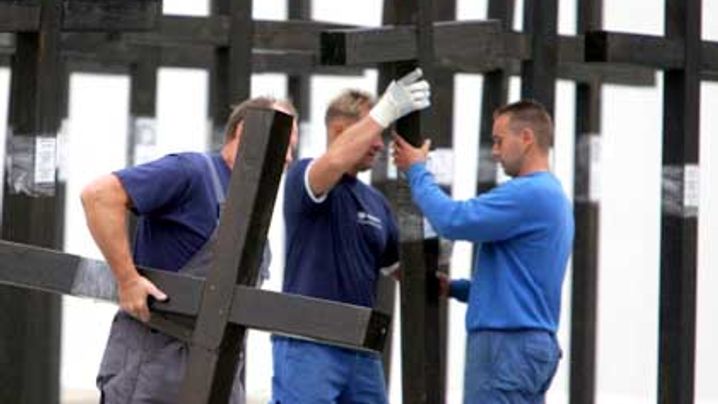 "The clearing of this monument is a scandal for all victims of the East German Communist Party and for all political prisoners the world over. It is shameful," said Phil Wolfgang Meyer, 55, who was arrested in 1988 for occupying the Danish embassy in an attempt to get out of East Germany. He was sentenced to three years in 1988 but served only one before the Wall came down a year later.

"People need to know what happened to us," said Juergen Breitbarth, who said he was, "unfairly imprisoned for years." The world and visitors coming to Berlin, he said, "need to know our stories. They need to be reminded of the terrible, shameful things that happened in this land."

Whatever Berliners thought of the monument aesthetically, one thing was clear: It was an obvious tourist draw -- part of the lore of divided Berlin. For indeed, as much as the city is known for its division, evidence of the east-west lines have faded so seamlessly that tourists now need guides to explain which side was which. Even most of the once-so-feared Berlin Wall is gone. Much of the concrete was ground down and recycled for roads or sold abroad. Ironically, some of the concrete now forms part of a wall surrounding the CIA in headquarters in Virginia. Another bit was used to build the bathrooms of a Las Vegas casino. And some, of course, has been broken into chucks, sold and carted home by tourists anxious to own a piece of Cold War history. Small sections have been left standing, but none of the ominous atmosphere remains.

As such, the now-defunct monument served a valuable and necessary function. The problem, however, was that the city had had nothing to do with creating it. It popped up in October 2004, the brainchild of the saucy and highly controversial owner of the popular Checkpoint Charlie Museum, Alexandra Hildebrandt, who is as fond of her personal crusades as she is of seeing her name in print. And it was built on land way too expensive for her small museum's means. In fact, it is smack in the middle of some of the priciest retail space in the city.

So, when her lease on the land ran out at the end of the year, the Hamm industrial group that owns the property told her to either pay up or get off. She did neither, although, to her credit, she did try to raise the money herself. Part of her campaign involved a direct appeal to US President George W. Bush to save the monument. Similar publicity stunts surrounding the construction of the monument last year led the city magazine Tip voting her "the most embarrassing Berliner" of 2004. But, even the negative publicity wasn't enough to get her the $43 million she needed to buy the land and after much paper pushing and legal wrangling, a court ordered her pay up or get off the property by July 5.

A "second death for the Wall's victims"

So, on Tuesday, amid an unusually strong summer downpour, the crosses -- each of which bears the name of a victim shot or killed trying to cross the border -- was dismantled, one by one, by city workers in blue overalls. Not without a certain amount of theatrics. Protestors began to congregate as early as Monday afternoon. Around 7 p.m., Father Vinzenz, a Catholic priest known for his work with prisoners, blessed each cross and ceremoniously doused dozens in holy water. Throughout the night and into the wee morning hours, an odd assortment of demonstrators -- including former East German residents and prisoners, church representatives, members of the city's conservative Christian Democratic party and, bizarrely, members of the American group Republicans Abroad -- gathered. The demonstration reached its crescendo around 6:30 a.m., when close to 200 protesters jeered and shouted at workers to leave the monument alone. To no avail.

Alexandra Hildebrandt -- a thorn in the city's side or a great asset?

By 9 a.m., most of the soggy demonstrators -- even those who had chained themselves to the crosses -- were calling it quits. "We unchained ourselves voluntarily because this is not supposed to escalate, but our anger remains," Breitbarth said.

Hildebrandt called the demolition, "a second death for the Wall's victims."

Despite the setback, Hildebrandt is vowing to continue the fight. The crosses are to be carefully stored for potential future use. And, though her behavior can be irritating, she has a great deal of emotional appeal on her side. Citizens of East Germany were perhaps the most spied on population in history and suffered immeasurably in the name of the communist ideal. They deserve a prominently-located monument in Berlin.

The problem, says the city, is that Checkpoint Charlie is not the place for such a memorial. The city's cultural senator, Thomas Flierl, himself a somewhat controversial character in that he was a chum of East German elites and served in the country's government, has criticized the monument strongly, insisting it is "the wrong monument in the wrong place."

American and Soviet tanks face off at Checkpoint Charlie on Oct. 28, 1961, shortly after East Germany closed its borders.

Still, all of Hildebrandt's posturing has not been for nought. Amid mounting pressure, the city's parliament last week voted to erect a monument to the GDR and Wall victims at the Brandenburg Gate. Plans, of course, remain vague and, given that the city is bankrupt, it could take years before anything materializes.

Hildebrandt, meanwhile, has been making friends in high places. She now has Hanns Peter Nerger, the head of Berlin's official tourism agency on her side. He even lent his voice to her campaign to save the monument.

Clearly, said Nerger's assistant, Natascha Kompatzki, "it is not good for the city's image to have photos of protestors chained to crosses being removed by police." Over 6 million tourists came to Berlin last year, she said, and most were hungry for Cold War history. "It's not a good thing for them to see a monument to that history being dismantled on television."

If nothing else, the city should perhaps think of its own interests when considering the monument. The Checkpoint Charlie museum is, after all, one of the three-most visited tourist sites in Berlin.