A giant hand raises an impressive paintbrush into the sky at the entrance to the art village. The bronze sculpture outside the gates of Dafen in southern China leaves no visitor in doubt as to what the people do here. The "village" is in fact a modern suburb of Shenzhen, a city with 10 million inhabitants northeast of Hong Kong, and it has achieved unexpected fame and relative prosperity. But the city's ostentatiously advertized success has little to do with creativity: It's based on the reproduction of famous artworks on an industrial scale.

In just a few years, Dafen has become the leading production center for cheap oil paintings. An estimated 60 percent of the world's cheap oil paintings are produced within Dafen's four square kilometers (1.5 square miles). Last year, the local art factories exported paintings worth €28 million ($36 million). Foreign art dealers travel to the factory in the south of the communist country from as far away as Europe and the United States, ordering copies of famous paintings by the container.

Huang Jiang remembers the time when Dafen was really just a village. He came here as the first art-producing entrepreneur 17 years ago. He worked as an errand boy in Hong Kong before he started copying famous art works. Then he crossed the border into China, resolved to open up the first workshop in what was then still a no-man's land. Wages and rent were low, and the port of Hong Kong was close by. "When I arrived in 1989, there was nothing here besides dirt roads and bamboo," the now 60-year-old businessman remembers. "It was like Siberia for factory owners."

Huang has three identical, gold-colored busts of himself standing in his office. They remind him of better days -- the 1990s, when his business was at the peak of its development. Once he produced 50,000 paintings in a month and a half for Wal-Mart, the US retail giant. He earned as much as €200,000 a year ($256,000) -- a fortune in China. Today the roughly 40 painters he employs earn him only five-digit sums.

The smile displayed by Huang's golden likeness no longer graces his own face. He seems tired. The competition is getting to him. His former apprentices have opened up their own workshops all over the neighborhood. Huang's idea turned out to be as easy to copy as an oil painting. "During the first few years, I was the only one in the business," he complains. "Everything was easier then, but the competition has gotten tough now."

The McDonalds of the Art World

The others are selling more paintings at lower prices -- like Huang's former pupil Wu Ruiqiu. His business "Shenzhen Artlover" ships 300,000 paintings a year and is one of Dafen's model companies. The businessman is dreaming of industrial mass production, complete with assembly lines. The creation of every painting would be divided into standardized production stages. Ruiqiu wants to "get into the business of oil paintings the way McDonalds got into the business of fast food." By the end of the year, he wants to have set up an art school for training talented new painters -- even if mass production doesn't require all that much talent. 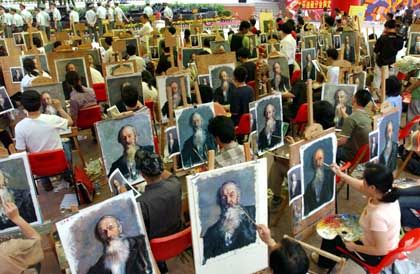 Painters compete during a facsimile match in Dafen Village. More than 110 contestants make facsimile of portrait or scenery oil painting in the timed match.

The Chinese government is proud of Dafen: It considers the art village an "important cultural industry," Huang says. The most recent product of the artsy economic miracle stands on the opposite side of the main street -- the town is running out of space. It's a replica of Michelangelo's David, flanked by flowerpots in front of the new "Dafen Louvre." The walls of the staircase are decorated with ancient Egyptian motifs more reminiscent of a comic book than of the land of the Pharaohs, and stamped with Chinese signature stamps. The melange of styles doesn't seem to bother anyone. In the Dafen Louvre, entrepreneurship and bad taste go hand in hand.

But what lies inside the building that sports such a pompous name? A shopping mall for cheap art. Many of the tiny sales stands are still empty. Eventually the town's elite producers will exhibit their very own masterpieces here. Some 10 percent of the paintings produced in Dafen are the product of the painters's own creative imagination, according to official statements. But even the originals are less than original. Technical skill may not be lacking, but genuine art is hard to produce on command.

Some five million oil paintings are produced in Dafen every year. Between 8,000 and 10,000 painters toil in the workshops. The numbers are estimates: No one knows the exact figure, which increases by about 100 new painters every year. But it's not just professional copy painters who are drawn to Dafen -- graduates of China's most renowned art academy also come here. They complete only a small number of paintings a month and earn as much as €1,000 ($1,282).

But artistic quality is in short supply in the Zhi Wei Art Gallery, where a young saleswoman sorts through unframed paintings of bare-breasted women and heroically posed horsemen. "The motifs are based on customer suggestions," the saleswoman says. Dafen's painters will produce whatever customers want. A few brushstrokes are enough to transform Gustav Klimt's famous portrait of Adele Bloch-Bauer into a likeness of the customer's sweetheart. Copies of famous masterpieces -- sometimes more, sometimes less competently executed -- are also very popular. A store right around the corner is selling a copy of "The Last Supper" by Leonardo da Vinci. The savior hasn't come out quite right, but the copied painting is still "a bargain, the cheapest in the whole village," as the gallerist points out.

The copied paintings on sale at the Wong Kong Oil Painting & Art Plaza are a little better. A reasonably skillful copy of Van Gogh's "Sunflowers" sells for €40 ($51). Buy 100 and the price goes down to €26 ($33), the gallery workers points out. The 100 paintings, guaranteed to have been produced by art academy graduates, ship within three weeks. Customers with less exacting standards can receive their 100 paintings within just one week, for €6 ($8) each. But those paintings aren't produced by academy graduates, the salesman adds.

Wu Han Wu is one of the workers who make their living as piecework producers of fake art. The 29-year-old man left school after grammar school. He shares a cramped top-floor studio with six of his co-workers. They work and live there. Small children play between rolled up canvases. Finished paintings hang suspended from the low ceiling so they can dry. The piecework painters toil away in the dim light for 12 hours every day. They always work on two paintings simultaneously. The workshop is specialized on flowers and landscapes, Wu explains.

A few routine flicks of Wu's brush and a forest appears on the canvas. A small photograph he holds in his hand serves as his model. He's working on a copy of an idyllic French landscape painting, a lavender field in southern France. Wu can churn out between 20 and 30 copies in a day. When a large order arrives, he may have to paint the same motif 1,000 times. "We don't get a fixed wage," he says. "We're paid by the finished painting."

Wu receives the equivalent of €0.30 per copied painting. That means he earns between €100 ($128) and €300 ($385) a month -- barely enough to cover his living expenses and send a little money home. But he doesn't complain: "It's much better in a workshop like this one, without a schedule." Once the painters worked in a factory owned by the company, where they had fixed working hours.

The life Wu and his roommates live is not so different from that of the artists whose works they're copying, at least as far as their average day is concerned: They start painting around lunchtime and work until late at night. But unlike many of his colleagues, who have made a name for themselves in town as artists in their own right, Wu will never paint an original. If he were allowed to paint whatever he wants, he would soon run out of ideas, the young man admits.