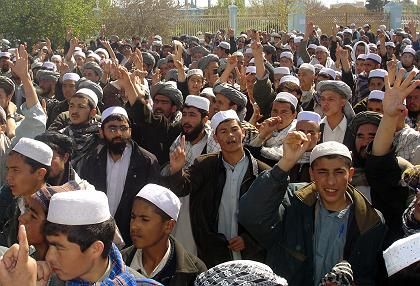 An Islamist demonstration in Afghanistan: Christians have no voice here.

Hashim Kabar is nervous. The 36-year-old is fidgeting with the plastic chair in his small office, looking repeatedly at his watch. His mobile phone keeps ringing and every few minutes he stands up and goes to the door of the small building. "Everything OK?" he asks the armed guard there, who is crouching next to the heavy steel door that has a small slit he can look out of. The guard nods and Kabar comes back. "I don't have a good feeling about this today," he says, rubbing his eyes. "Something tells me we're going to have a visit."

It's difficult arranging meetings with people like Kabar. Time and again he postponed the appointment, then he asked that the location be changed. Finally the meeting takes place in his office. Brochures are lying about and a computer hums in the background, but nothing would indicate the subject of the conversation. There are no crucifixes on the wall, no Bibles on the shelves. Anything that could out him as a Christian has been put out of sight, out of fear. He is afraid that what happened to Abdul Rahman, another convert to Christianity, might happen to him.

The case of Rahman serves as proof to Afghan Christians that they live in extreme danger, simply because of their beliefs. Despite the fact that international pressure prevented Rahman from being sentenced and perhaps executed by Afghanistan's justice system, Rahman's story illustrates the extreme stress that those who turn away from Islam experience every day. "We must recognize that freedom of religion, as promised by the Afghan constitution, does not exist," says Kabar, sadly. "But maybe it's good that the international community is now aware of that."

Persecution under the Taliban

Kabar converted to Christianity 20 years ago, when such a thing was not as taboo as it is today. "There were a lot of churches, both in Kabul and in the country," he says. "Back then the two religions coexisted here almost peacefully." But that all changed when the Taliban came to power in the mid-1990s. Taliban Supreme Leader Mullah Omar ordered his men to raze churches to the ground, to lynch Afghan Christians and to kill or drive out foreigners who followed Jesus Christ.

Many of Kabar's friends lost their lives during this period. "They tortured prisoners until they got them to tell them the names of other Christians. Then the Taliban would kill them and go in search of new victims." Why he himself survived, he doesn't know. He was taken prisoner twice and interrogated for hours at a time, but his persecutors could find no proof. "I knew the suras and the prayers from the Koran by heart. So I pretended to be a good Muslim," he said, with something like pride in his voice.

But the disappearance of the Taliban has not made much of a difference for people like Kabar. Converts continue to be hunted down, thrown into prison or even killed by their neighbors. The West was largely unaware of the situation, and it was only by coincidence that Rahman's case captured international attention. Afghanistan's 2004 constitution, which guarantees freedom of religion, is of little use to Christians. "Many in power in the judicial branch are imams or clerics who have little interest in the constitution," says Kabar.

Kabar is forced to renounce his core identity every day. There is an Islamic name on his business card, although privately he carries the name of one of the apostles. Only his family and his closest friends know his secret. Sometimes, he says, he has to act as if he is praying to Allah. "If business associates come to my house and suddenly want to pray, I have to go along," he says, adding that he only hopes his God understands.

No one knows how many Afghan converts there really are. Because there are no churches, there are also no records. Everything is carried out in secret; only Christians know other Christians. Kabar says he knows a couple of hundred in Kabul and in many other Afghan cities, estimating that there are probably in total between 1,000 and 2,000 people of the Christian faith in Afghanistan, against a Muslim majority of nearly 20 million. Christian Web sites put that number at 10,000, a figure which seems exaggerated.

Even Christian foreigners in Afghanistan feel the oppression brought down by the larger Islamic society. While Christians in Kabul, who mostly come from the Philippines, can hold masses in Kabul, they have to do so in secret. The head of a small foreign congregation, an ophthalmologist from the United States, declined to talk about the issue last week. Christian groups are often suspected of being missionaries; therefore it's better to keep a low profile. His own church is completely unrecognizable as such, apart from a (relief of a) fish on the outer wall.

The persecution and the constant danger have turned the community of Afghan converts into a closely knit underground organization. Ironically, the oppression has strengthened the faith of many.

Nothing can happen in the open, and Kabar and his fellow believers hold their worship services on different days of the week. "It would be too dangerous to do it on Sunday, because it would be easy for them to observe us." Converts are contacted just before a service is to take place, often by innocent-sounding mobile phone text messages. "We're having tea at 11 o'clock," is one that Kabar reads.

The locations of services change constantly as well, and they are always held in private homes, where everything has to be prepared well in advance. The household staff must be away; neighbors mustn't notice anything; and everyone has to have the 100 percent trust of everyone else. It is too dangerous to even have a Bible at most services, says Kabar, who knows his prayers by heart. Police have come and searched his house three times already, but failed to find anything incriminating. "They know I'm a Christian," he says. "But I won't give them any reason to put me on trial."

Even though Afghanistan has dismissed its case against Abdul Rahman, this is a cold comfort for Kabar. He and his friends fear that anger among Islamists over Rahman's release could spur them to take matters into their hands and act even more brutally toward converts. "Abdul Rahman's release is a good thing," he says. "But the international community needs to keep its eyes open."

According to Kabar, the worst thing would be if the resolution of the case leaves the impression that everything is now OK for converts living in Afghanistan. If that happens, he says, the case would have done more harm than good. "We are going to stand by our faith," he adds on parting. "Any kind of support would help us a lot."

*Due to the danger of persecution, the convert's name has been changed and his picture is not shown.