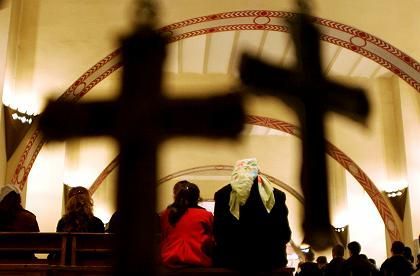 Turkey's Christians are a tiny minority.

When Rainer Korten first arrived in Antalya, located on Turkey's south coast, the locals weren't sure what to think of him. The white-haired 65-year-old came in November 2003 as a minister for the hordes of European tourists who flock to the region every year. He set himself up in a former Internet café in the heart of the town and changed it into a small church. Antalya's Turkish residents eyed him suspiciously.

That was then. Now, people greet him on the streets with a friendly "Hallo Papaz, merhaba!" "Nasilsiniz?" -- how's it going? Even the flower seller next door gives him a bunch of flowers on Christian holidays.

But Korten's harmonious experience in sunny Antalya is more the exception than the rule. Overall, "the climate is more oppressive," Catholic Bishop Luigi Padovese, who is in charge of Anatolia, complained recently to Italian journalists during a trip to Rome.

Padovese also lives relatively modestly in the Mediterranean port of Iskenderun just north of the Syrian border in eastern Turkey, and the people there are friendly, he says. Yet the Italian is disheartened by the bureaucratic hurdles which the Turkish state is continually putting in the way of the Christian churches despite ostensible religious freedom. Then there are the books and newspapers which constantly spread prejudice and conspiracy theories in which Christians play a central role.

But mostly, it is the murder of one of his priests, Andrea Santoro, which the bishop cannot get over. In February, Santoro was shot from behind while praying in the church in Trabzon on the Black Sea. Only a few months later, 75-year-old Father Pierre Brunissen was stabbed in Samsun, 250 kilometers away.

Even if such acts of violence are extremely rare, the pope is coming to a Christian Diaspora during his Turkey visit which is in need of urgent attention. In Turkey, Christians make up a tiny minority of 100,000 to 120,000 as compared to more than 70 million Muslim Turks. Most of the churches of the once powerful Christian empire of Byzantium were converted to mosques after the invasion of the Turks in 1453. Today, Christian communities are fighting for survival in many places. In Trabzon, for example, the small Christian kingdom of Trapezunt existed for a good 250 years until 1461, yet today there are barely a dozen Christians here.

The Orthodox Greeks, once one of the most important groups of Asia Minor, have shrunk to 4,000 in the whole of Turkey. In the forced population exchange between Greece and Turkey in 1923, almost 1.5 million Orthodox Christians were driven out and replaced by Muslim Turks having to leave their homes in areas now part of Greece. Even before the founding of the Turkish republic, the country had lost more than a million Christians through the mass murder and expulsion of the Armenians during the First World War.

Thanks to a particularly high number of foreigners, the Catholics are, with around 30,000 believers, the second strongest Christian religious group in Turkey after the Armenians (around 70,000). And even though there are only a small number of Orthodox believers in Turkey, its seat of power, as occupied by Ecumenical Patriarch Bartholomew I, Archbishop of Constantinople and New Rome, remains in Istanbul. Pope Benedict XVI's visit with him is more than just a matter of form. Bartholomew is the head of a church with some 300 million members worldwide.

The meeting between the two Christian leaders -- on Muslim ground in Turkey -- could even have a historic dimension to it should rapprochement between the Catholic and Orthodox churches be significantly advanced. Pope John Paul II began the process to heal the centuries old rift during his papacy, but some major doctrinal differences remain -- one of the most significant being the Catholic's belief that the pope is Christ's representative on Earth, a point of few strictly rejected by the Orthodox.

Expropriated by the Turkish state

Still, for Christians in Turkey, the doctrinal differences between branches of Christianity are much less important than the difficulties they face living in a predominantly Muslim country. Constitutionally, Turkey is secular and Christians are guaranteed the right to practice their religion. In reality though -- as the European Union criticized earlier this month on its regular "Progress Report" on Turkey's accession to the EU -- non-Muslim communities face considerable difficulties. Churches, for example, still do not have legal status and enjoy only limited propriety rights. This means, for example, that the Catholic St. Pauls church in Istanbul must set up a real estate corporation with its priest as shareholder in order to maintain ownership of its church and hall. Bishop Padovese, to cite another example, lost part of his church property in Iskenderun to the municipality because they wanted to put a parking lot on the site. The Greek Orthodox community in Istanbul, which used to have around 11,000 properties, now only has about 500.

Much of the property was lost in the years following the 1923 population exchange when Greek schools, hospitals and other installations stood empty. The Turkish state essentially expropriated them. The government of Prime Minister Recep Tayyip Erdogan has improved the legal situation slightly with amendments to the law but in remains a rarity for Christian communities to get their property back or to receive compensation.

Especially bitter for many Christians is that they can still clearly remember the euphoria with which the Islamic-rooted AKP (Justice and Development Party) steered towards Europe when it started governing four years ago. Minority groups immediately started hoping for more pluralism and full rights. Now though, with the accession difficulties facing Turkey and the plummeting public eagerness to join the EU, those hopes are fading.

Ottmar Oehring, human rights representative of the Catholic missionary organization, Missio in Aachen, and Vatican expert on religious freedom in Turkey, sees only slight progress on the path to complete religious freedom in Turkey. He says there is continuing discrimination towards non-Muslim minorities -- there is, for example, no sign of the seminary on Heybeli Island in Istanbul being re-opened. The site was once a famous learning center for the Orthodox Church, but was shut down by the Turkish state in 1971.

The European Union is demanding that the seminary be re-opened. The Turks, for their part, are extremely skeptical of uncontrolled theological academies. The training of Muslim clerics is likewise strictly controlled in an effort to avoid Islamist extremism and defend the secularity of the Turkish state. Still, Christians in Turkey are hoping that the pope might be able to make some headway where the EU has lost leverage.

Much of the world's attention will be focused on what the pope has to say about Islam and the relationship between the Catholic Church and Muslims the world over. Even still, Turkey's Christian population will have their time in the spotlight. The world will see, says a pleased Bishop Padovese, "that there really still are Christians in Turkey and a Catholic church.