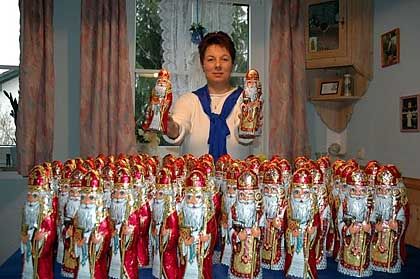 Silvia Englberger with her horde of St. Nicks.

Blame it on Thomas Nast. After all, before the German-American put pen to paper in 1862 and brought the popular image of rose-cheeked, cherry-nosed Santa Claus to life, St. Nicholas used to rule the December roost. On the 6th of the month, the 4th century saint would visit the homes of good little European children and leave behind tasty treats and small gifts -- stuffed in boots left outside for the occasion.

And the old guy has a bit of class -- forget the shaking belly, the silly "ho-ho-ho" laugh, and kitschy reindeer of Santa. St. Nicholas's white beard conveys gravitas, his red mitre and wooden sceptre commands respect -- as does his occasional threat to whip bad little boys. Santa seems a pathetic, capitalist copy by comparison.

Now, though, St. Nicholas has some allies -- and they are doing what they can to win back some territory from the trans-Atlantic Santa invasion. Where to start? On Santa's territory, of course: the store shelves.

On the front lines of this battle stands Silvia Englberger, a 39-year-old from Osterhofen not far from Passau in southern Germany. She and her Catholic Church women's group were discussing Christmas traditions recently -- and bemoaning the fact that supermarkets in Bavaria were almost St. Nicholas-free zones. Englberger resolved to do something about it.

"We have such nice stories and legends here about St. Nicholas," Englberger told SPIEGEL ONLINE. "It's concerning that the next generation won't have the opportunity to enjoy this tradition. There needs to be a choice. All those who believe in Santa Claus should have him. But we can't just allow St. Nicholas to be forgotten."

By her own reckoning, Santa Claus has been on the march in southern Germany for at least the last 10 years. His bag full of toys and Hollywood appeal has made it difficult for the stodgy old St. Nicholas to compete. Indeed, Santa has become something of the symbol for consumerist Christmas -- and children seem more focused than ever on Christmas trees and presents -- opened on Dec. 24th.

In mid-November, Englberger developed an action plan. A member of her church group had mentioned that chocolate St. Nicks abounded in Austria -- almost on par with his slightly obese, twinkly eyed American cousin. So she headed across the border to see what she could find. The result? To her surprise, not much. Turns out, just as Germans up north head across the border into Poland to fill up the gas tank, their Bavarian cousins to the south head to Austria to stock up on mass quantities of chocolate formed to resemble the ancient saint. At least that's the news she got from Austrian store owners.

Not one to give up easily, she found out where the chocolate St. Nicks came from: an Austrian company called Hauswirth. She called just in time to order the last 100 figures. Should you want one yourself, you'll have to send your kids to Obergessenbach this Sunday. Englberger will be passing them out in church.

Englberger's offensive recalls a similar campaign in Frankfurt. In 2004, Catholic priest Eckhard Bieger made headlines by handing out stickers to proclaim "Santa-free-zones." Like Englberger, he also took a closer look at chocolate, by showing kids how to transform chocolate Santas into chocolate St. Nicks. The initiative continues this year, with stickers for sale on the Web along with kits to help you make your very own St. Nick.

Beware the cats and dogs

"I think the campaign is a good one," Bishop Franz-Josef Bode of Osnabrück told the Catholic News Agency in a recent interview. "The church should make more of an effort to bring their own Advent figures into the foreground." His first priority? Giving St. Nicholas a leg up in his ongoing battle with pre-Christmas consumerism as symbolized by Santa Claus.

Englberger, too, has sought to broaden her crusade. She began calling around to local supermarkets to encourage them to stock St. Nick. And she found some success. Rainer Uhrich, manager of her local REWE store, a major supermarket chain here in Germany, says he's going to make sure to offer St. Nicholas chocolates next year. "We just want to keep the tradition alive here in Lower Bavaria," he told SPIEGEL ONLINE, before admitting that he doesn't actually come from Lower Bavaria. "But Ms. Englberger told me all about it and I think it's important to not let the tradition die."

Others may follow suit. A number of members of the local Catholic women's association have begun approaching more supermarkets in Germany to demonstrate that there is a demand for chocolate St. Nicks. Englberger, meanwhile, has her hands full until she passes out her treasures on the weekend.

"I have three cats and a dog, and they really like sweets," she says. "I have to protect my chocolate St. Nicholases from them."