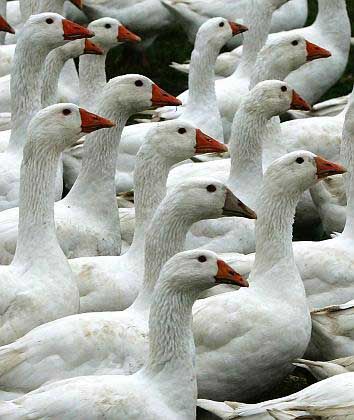 What's good for the goose is not so good for German consumers.

Christmas is coming. And across Germany, the geese are getting fat. But a holiday crisis may be looming: There seems to be a shortage of geese in the country, meaning Christmas feasts from Kiel to Freiburg are in danger.

"There is a shortage this holiday season of some 300,000 animals across the country," says Thomas Janning, spokesman for the Association of German Poultry Producers. Goose farmer Lorenz Eskildsen of Saxony rings the alarm bells even louder: "The market is very nervous," he says. "Not everyone will get a German goose this year."

Why not? The short answer is bird flu. Not that the avian illness has decimated German flocks. Rather, with the media focus on the spreading disease last winter and the large scale slaughters of poultry that hit those few farms in Germany infected by the virus, many farmers became reluctant to invest money in buying goose chicks this spring. After all, why spend money when bird flu might wipe out your young birds before they go to market?

Now Germans may have to rely more than ever on imported geese to satisfy their holiday hunger. Indeed, the German goose was already becoming something of an endangered species, with only 14 percent of the annual consumption of 29,000 tons of the popular fowl coming from within the country's borders.

Much of the rest comes from Eastern Europe, where less strict animal protection laws allow farmers to force feed their animals. In Hungary, for example, geese are fed up to 10 times the amount of calories they need per day in an effort to enlarge their livers for foie gras production. Looser controls plus high foie gras prices equals lots of geese.

Still, even as goose imports from the east continue to rise, there will likely be a shortage in European butchers this year. Meaning those who absolutely have to eat goose will have to pay for the pleasure -- more than €9 per kilogram.

With reporting by Sebastian Knauer