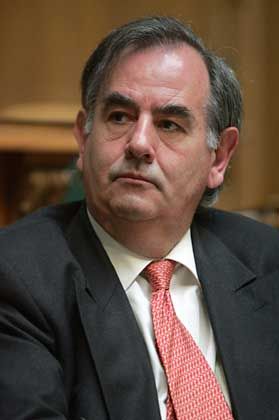 SPIEGEL ONLINE: Mr. Alvaro Gil Robles, you visited the Camp Bondsteel war prison in Kosovo in September 2002. Why were you there? What did you see?

Robles: I traveled to Kosovo to compile a report for the Council of Europe on whether, and to what degree, people's human rights were being respected. I visited a number of prison camps, including Camp Bondsteel. What I saw there, the prisoners' situation, was one which you would absolutely recognize from the photographs of Guantanamo.

SPIEGEL ONLINE: Can you give us some more detail?

Robles: The prisoners were housed in little wooden huts, some alone, others in pairs or threes. Each hut was surrounded with barbed wire, and guards were patrolling between them. Around all of this was a high wall with watchtowers.

SPIEGEL ONLINE: How many prisoners were there? What nationalities were they?

Robles: At the time of my visit, there were 15 prisoners. Most of them were Kosovo Albanians or Serbs, and there were four or five North Africans. Some of them wore beards and read the Koran.

SPIEGEL ONLINE: What did you do?

Robles: This prison was under the command of the Nato KFOR troops, the "Kosovo Force". What interested me initially, back then, was under what legal basis KFOR was allowed to lock up prisoners outside of the normal judiciary proceedings. Because these people had been arrested directly by the army, they had not had any recourse to the judicial system. They had no lawyers. There was no appeals process. There weren't even exact orders about how long they were to be kept prisoner. I wrote in my report: this is no longer acceptable. We must introduce democratic standards, based on the rule of law. And since then, that has happened. 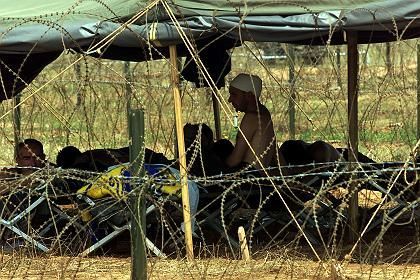 Robles on Camp Bondsteel: Conditions were reminiscent of Guantanamo.

SPIEGEL ONLINE: Why did this not provoke a storm of controversy back in 2002? Why are we only hearing about it now?

Robles: I wrote all the details of what I saw in my report for the Council of Europe. It was not discussed by the Council at all, but it was published on the Internet. I have also spoken openly about it many times since then, but there was not as much interest back then as there has been recently.

SPIEGEL ONLINE: The Americans have emphatically denied any responsibility for the prison camp in Kosovo. They say it was not a CIA establishment, but one belonging to the Nato KFOR troops. Is that true?

Robles: Absolutely. And the then KFOR boss, General Marcel Valentin, helped me as much as he could during my visits. There was no attempt to hide anything or hush anything up. Everyone knew what was going on in Camp Bondsteel.

SPIEGEL ONLINE: The Europeans, the German authorities too? They knew of the conditions there?

Robles: Yes, certainly. It was known that people were being held prisoner there, in those completely unsatisfactory conditions: without sufficient tangible evidence against them, without the guarantees that come with the rule of law. None of it was secret.