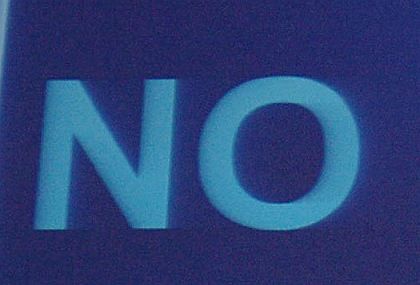 You'll hear this word a lot in Germany.

On the service mentality

In Berlin people will always say no to you first. "How are you?" "NO." "Can I have another cup of coffee?" "NO." Forget about dry cleaning or express anything. It's not going to happen. You want a 20 minute express manicure? No. You have to make an appointment three months in advance. You better call now if you want to get your toe nails painted in September. Express anything is simply not going to happen. You want to take something to the dry cleaners? Well, that's going to take a week.

People are just always going to be saying no, so don't be shocked and don't get shy and don't be offended. Just keep asking and be brave. It's not that they're unfriendly. It's just you have to ask 3 times and then they'll say yes. It simply goes: "No. No. No. Ok."

Americans who come from New England, like me, are pretty prudish. I come from Boston and we're all old prudes. So when I first got here in the summertime I was completely shocked. I went for a ride through the park and there were these naked people everywhere. That was something I was completely unprepared for and I was staring like some kind of a zombie and I almost ran over a kid with my bike. The first thing you should do when you get here is get a bike. It's a lot of fun; there are really beautiful bike paths. But be careful because you never know when you might encounter a field full of naked people -- men, especially -- and in the middle of the city! But I'd say, get on a bike, have some fun or take your clothes off. You might meet some nice people that way.

My problem when I arrived was that I had no German at all except Kindergarten, Volkswagen and Blitzkrieg, which is not going to get you very far. You should at least learn how to say, Danke and Bitte. It's just two syllables and every American can learn that. Have yourself a lovely cold beer or a glass of wine; there's great beer and wine here and then things also get a lot easier to understand.

Or fall in love. The best way to learn German is to fall in love with a German. For the American girls the German boys are wonderful. We tend to freak out. We'll be sitting somewhere saying, "I don't know where the subway is and I just lost my purse and my cell phone isn't working" and some German guy will come and look at you and say, Schritt für Schritt (step by step) and you think, "Hello tall, softly-spoken man. Thank you".

On the World Cup

I feel like we're getting ready for the end of the world or Sodom and Gomorrah. I can't bear to read one more report saying that 900,000 Eastern European prostitutes are descending on Germany for the World Cup. Just recently I've been touring. I've been to places in Germany that I didn't even know existed and every little tiny town has been ripped up by some giant construction site. And you ask them what it's for and they look back smugly and say, "It's for the World Cup".