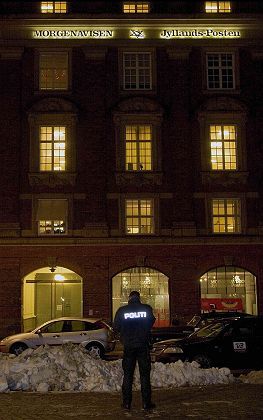 Do the editors of Jyllands-Posten apply double standards?

Although the strife over the Muhammad cartoons published in the Danish newspaper Jyllands-Posten already feels like it's been going on for a small eternity, new angles continue to pop up each day. The latest comes from the Danish daily Politiken, conservative Jyllands-Posten's more left-leaning competitor.

On Saturday, Politiken printed a series of caricatures of Jesus on its editorial page. Next to them, the paper reprinted an e-mail exchange from April 2003 in which a leading Jyllands-Posten editor rejected publication of satirical cartoons depicting Jesus Christ. His reasoning? "I don't think the readers of Jyllands-Posten would be pleased with the drawings. I think they would cause an outrage. That's why I won't use them."

That line of reasoning, of course, is raising eyebrows this week. Does the newspaper responsible for launching the battle over the Muhammad caricatures, which now presents itself as a champion of free speech, apply a different standard for its Christian readers? "It does look a little like hypocrisy," said Politiken opinion page editor Jacob Fuglsand.

Reached by telephone, Jens Kaiser, the Jyllands-Posten editor responsible for the email said he now regrets the wording of the message. "I could not foresee that my kind refusal would be published three years later. My fault was that I didn't tell him what I really meant. The cartoons were just bad."

Ultimately, however, the Jesus cartoons were an unfortunate coincidence. The self-employed illustrator responsible for them, Christoffer Zieler, sent the unsolicited Jesus caricatures to the newspaper just before Easter 2003. "He suggested that we print them on Easter Sunday," Kaiser recalled, but he rejected them, "like 95 percent of all submissions." Kaiser also explained that he often tried to use more polite methods of brushing off illustrators than to simply tell them their work was lousy.

But in today's loaded atmosphere, the e-mail is proving explosive. The decision showed a "double standard" a member of the Muslim interest group told Britain's Guardian.

Politiken first learned of the drawings after the illustrator contacted the newspaper. "I found that it was a nice story that opens a new angle on the dilemmas an editor faces," Fuglsand said. Of course, editors also love nothing better the opportunity to take a stab at the competition.