Security cameras in stores help to fight crime and reduce shoplifting. But what can shop owners do if thieves hide behind the all-covering Islamic garment, the burqa? This is the problem facing jewelers in the Indian city of Pune after a number of expensive pieces of jewelry were stolen by burqa-clad shoplifters. 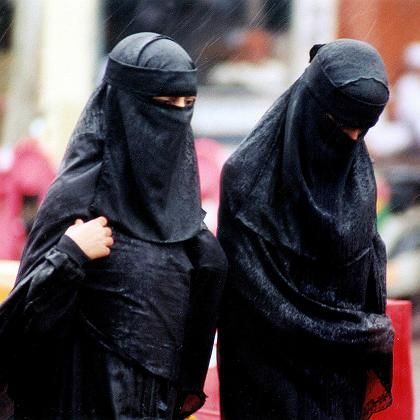 Indian Muslim women wearing burqas. The head-to-toe Islamic robe could be banned at jewelry stores in an Indian city after a series of thefts.

The Pune Jewelers Association has now applied to police for permission to bar people who cover their faces from their stores, association president Fattechand Ranka told the news agency Reuters. Pune is located in the state of Maharashtra, around 160 kilometers (100 miles) south of Mumbai.

Ranka said the decision was prompted by a recent spate of thefts. Closed circuit television cameras in stores showed that three recent thefts of jewelry items, each valued at over $8,500 (€6,500), were carried out by customers wearing burqas.

"Because of the burqa the police could not identify their faces," he told Reuters. "Anyone could be masquerading under a burqa, even a man."

Ranka said his move was not aimed at Muslims, who are a minority in Pune, but would target anyone who refused to show their faces to the security cameras. Many Hindu women in India also wear veils.

Ranka said he had sent a letter to Maharashtra's police chief but had not yet received a response.

However, Pune police commissioner D. N. Jadhav said police would not allow the ban, fearing it could cause conflict with the Muslim community.

Relations between Muslims and Hindus have often been tense since the subcontinent's bloody partition and the creation of Muslim-majority Pakistan in 1947. Around 13 percent of India's population is Muslim, while 80 percent of Indians are Hindu.

"If they are really concerned about security, they can appoint saleswomen and women security guards in their shops," Jadhav said.

Reaction among the Muslim community was mixed. Naseem Siddique, the head of the Maharashtra Minority Commission, said a ban would fuel further discrimination against Muslim women.

"It's up to a Muslim woman to decide if she wants to shop in a burqa," Siddique told Associated Press. "Next they will say they will not allow a Sikh in a turban because he could be hiding a pistol under it."

However a council of powerful Islamic clerics defended the jewelers' decision. Maulana Zaheer Abbas Rizvi, the secretary of the All India Ulama Council, said jewelers were entitled to protect their livelihoods.

"They do not seem to be against any religion but are acting on purely business interests," he told the newspaper Times of India.

The burqa is a head-to-toe garment worn by some Muslim women and which is common in Afghanistan and Pakistan as well as in parts of India. In Europe its wearing has sparked controversy. The Netherlands is currently planning a ban on Islamic clothing which covers the face.