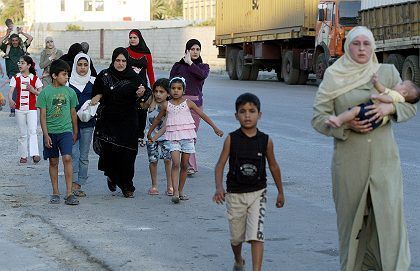 Palestinian families leave the site of clashes on the outskirts of the Palestinian refugee camp of Ain al-Helweh in Sidon, Lebanon.

The deadly volley of shelling and sniper fire at a refugee camp in northern Lebanon intensified Sunday, and fighting broke out between militants and the army in another camp in the south, increasing fears that the two-week battle between the Lebanese Army and Islamist militants could spread to other parts of the country.

The army said one soldier and two militants were wounded at the Ain al Hilwe camp, near the southern Lebanese town of Sidon, in a fierce firefight that began when angry militiamen sought revenge for the reported killing of one their leaders at the Nahr al Bared camp, in the north.

Ain al Hilwe, a sprawling camp packed with more than 47,000 refugees where armed militias roam the streets, has been seen by security officials as a flashpoint since the recent conflict began. Palestinian leaders in Lebanons 12 refugee camps, but especially in Ain al Hilwe, had been struggling to prevent the fighting in the north with the Fatah al Islam militia, a group inspired by Al Qaeda, from spreading to other camps.

Skirmishes among heavily armed Islamist militias like Fatah al Islam, gunmen with the more secular Palestinian Fatah faction and the Lebanese Army have grown more frequent recently at Ain al Hilwe as the ranks of Islamist militias have begun to swell with fighters, many of whom have come from Iraq.

Witnesses at the southern camp said members of the militant group Jund al Sham, which is sympathetic to and shares members with Fatah al Islam, came out on the streets Sunday, enraged at a report that a senior member known as Abu Riad had been killed in the fighting at Nahr al Bared.

They began firing at an army checkpoint nearby, leading to a three-hour firefight in which militants and the army exchanged heavy machine-gun fire and hand grenades.

Hundreds of fearful residents from areas near the camp fled and descended on Sidons city hall, where the authorities began making arrangements for them to spend the night. The electricity inside the camp was cut, apparently by the city, leaving much of the area in darkness.

Three hours after the fighting began, Palestinian factions inside the Ain al Hilwe camp said they had successfully negotiated a cease-fire, and families were loaded onto buses late Sunday night and returned home.

But fighting resumed and continued into Monday morning.

I have seen a lot of things happen here, but I never saw anything this bad, said one local official, who spoke on condition of anonymity late Sunday night because he was not authorized to speak to the news media. They were using live explosives and we thought this was it, this was the fight we were dreading.

A gunman who gave his name as Abu Jaffar, speaking by telephone from inside the camp on Sunday evening, said: We will not stop the fight. We are the sleeper cells that Fatah al Islam has warned everyone about.

We will not stop our fight until the army ceases its fight in the north, he added.

The army on Sunday also intensified an offensive against Fatah al Islam that began Friday after a 10-day lull at Nahr al Bared, seeking militants hiding inside, striking deeper inside the camp and as a result heaping further destruction on civilian areas in the camp. But the heavily armed militants of Fatah al Islam fought aggressively, vowing to battle to the death and dashing hopes that the siege could be settled politically as some in the camps had hoped.

Three Lebanese soldiers were killed and several others were wounded in the fight, a senior army official said, speaking on condition of anonymity because he was not authorized to speak to the news media.

Relief workers evacuated one wounded civilian from the Nahr al Bared camp on Sunday morning, the Red Cross said, but the fighting that followed kept aid organizations from making any further evacuations and deliveries of food and medical assistance. About 6,000 Palestinians remain trapped inside the camp, the Red Cross estimated, and their condition is thought to be dire.

A spokesman for Fatah al Islam said five of its fighters had been killed since Friday and three had been wounded in the northern camp. The army is losing its morale because Fatah al Islam is completely in control of the situation, said the spokesman, Abu Salim Taha. If the army continues fighting like this, it will face massive losses.

The official death toll from the two-week conflict reached 110, including 44 soldiers. But the death toll of militants and civilians inside the camp is expected to grow as bodies are sifted from the rubble.

A senior Lebanese Army officer said troops had fortified positions taken Friday and Saturday, but he would not comment on how far the army had advanced and whether it had entered the Nahr al Bared camp on Sunday. Under an agreement signed in 1969, the army is not allowed to enter Palestinian refugee camps in Lebanon.

The army has placed heavy restrictions on news coverage of the siege, keeping reporters far from view of the camp.

Islamist militant groups have had a presence in the Palestinian camps for a decade, security officials say, thriving in the atmosphere of lawlessness and poverty. But the ranks of Islamist groups have grown among Lebanese themselves, especially in predominantly Sunni Muslim towns in northern Lebanon like Akkar and Tripoli.

More than 25 men from Ain el Hilwe have gone to Iraq to fight, officials of the Palestinian Fatah faction say, their fate unknown.

The fighting in Sidon, a Sunni city that is the gateway to Lebanons Shiite south, underscored the dangers of the conflict in northern Lebanon spilling over into other areas.

What happened today is very bad, very tragic, said Abdul Rahman Bizri, the mayor of Sidon, who worked with religious leaders and the army to try to calm things and to help families return to their homes. The Lebanese Army is fighting a very important battle and it has to win it. Because the balance of this country is too delicate, and they are the very core of our national security.