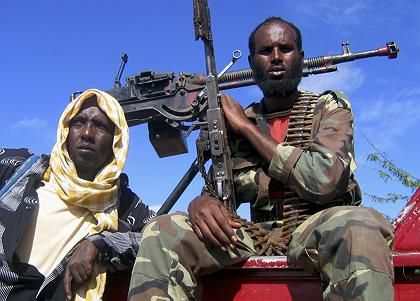 American concern about Islamist militants, such as these Islamist fighters in Somalia, gaining safe havens in weak African countries is one reason behind the decision to establish a new African Command.

With the end of the Cold War, Germany lost much of its strategic importance for the United States military, a development reflected in the ongoing drawdown of US forces from bases here. But Germany hasn't lost all of its significance -- it is still home to the US forces' European headquarters and soon it will also serve as temporary host to the US military command for Africa, Africom.

"This new command will strengthen our security cooperation with Africa and create new opportunities to bolster the capabilities of our partners in Africa," US President George W. Bush said, announcing the plan on Tuesday. "Africa Command will enhance our efforts to bring peace and security to the people of Africa and promote our common goals of development, health, education, democracy and economic growth in Africa."

The move reflects increased US interest in the continent as a result of fears that Islamist militants could find havens in countries with weak governments such as Somalia. US embassies in Nairobi, Kenya and Dar es Salaam, Tanzania were targeted in simultaneous al-Qaida attacks in 1998, killing over 250 people, and US forces recently targeted al-Qaida militants in Somalia with air strikes. Washington is also keen to foster stability on the continent with an eye to Africa's oil reserves which could provide an alternative to Middle Eastern oil.

The new unit will initially be based in the western German city of Stuttgart, also home to the military's European Command, and it is expected to be in full operation by September 2008. The first members of the team, which will initially comprise around 45 people, began moving into Kelley Barracks last week, the military newspaper Stars and Stripes reported Wednesday.

"This command will enable us to have a more effective and integrated approach than the current arrangement of dividing Africa between Central Command and European Command -- an outdated arrangement left over from the Cold War," US Defense Secretary Robert Gates told the US Senate's armed services committee.

However, after two to three years in Stuttgart, the command is expected to move to an as yet undetermined location in Africa. "The goal is for (Africom) to be on the African continent," a military official told the newspaper.