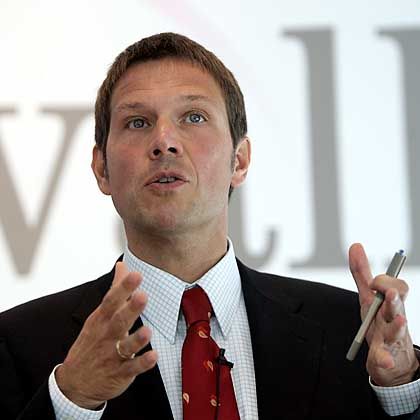 Rene Obermann takes over the helm of Deutsche Telekom on Monday.

Rene Obermann is taking over from outgoing Kai-Uwe Ricke as the new CEO of Deutsche Telekom. The new chief was named Monday, one day after the struggling telecom giant sent Ricke packing.

What's bad news for Ricke, however, is turning out to be good news for investors. Shares rose 3 percent at the news in early Monday trading.

The move comes four days after Telekom reported a 20 percent fall in profits in the third quarter this year. Compared to the same quarter last year, profits were down 34 percent.

Obermann, the 43-year-old head of T-Mobile wireless, has led the unit through a period of growth as the result of the expansion of its operations in the United States. With his promotion, Obermann will now become the youngest CEO of the 30 companies on Germany's DAX index of blue-chip companies.

Deutsche Telekom, the former state-controlled telecommunications monopoly, has steadily lost fixed-line customers who have run off to cheaper providers. In Germany, 1.5 million customers have moved to other operators this year alone.

The company is lagging behind its competitors in adapting to the new telecom landscape in which the Internet has drastically reduced demands for regular phone calls. Deutsche Telekom employs 250,000 people -- more than twice that of its British counterpart BT Group. It's completed about a third of its three-year plan to cut 32,000 German jobs.

In August, Ricke had to revise downward the 2006 and 2007 forecasts for sales and profits, which sent the share price tumbling.

"The share price has disappointed this year and clearly underperformed," Chris-Oliver Schickentanz, head of research at Dresdner Bank in Frankfurt, told Bloomberg. "Financial investors such as Blackstone and the government clearly didn't like it."

Blackstone -- the New York based private equity firm that bought a 4.5 percent stake in Deutsche Telekom in April -- has seen the value of its holding slump by about $212 million in a matter of months. The German government, which owns about one-third of the company, can't be happy either.

Deutsche Telekom's stock has been the worst performer in an index of European phone companies this year.

Ricke, who said he had the "full mandate" of the supervisory board less than two weeks ago, is the second major CEO in Germany to have lost his job during the past seven days. Last week, Volkswagen chief Bernd Pischetsrieder was shown the door and replaced by Martin Winterkorn, of the company's successful subsidiary Audi.

Ricke lasted four years on the job, despite an ominous beginning. He became CEO in November 2002, on the very day Deutsche Telekom posted Europe's biggest quarterly loss ever. Predecessor Ron Sommer's purchase of high-speed wireless licenses and VoiceStream Wireless had bloated the company's debt to €64 billion.