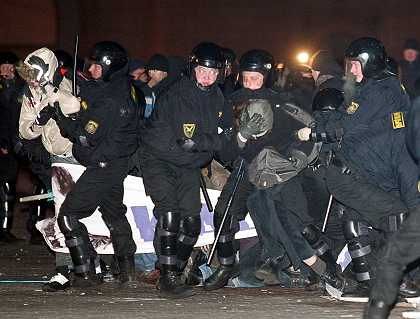 Belarus President Alexander Lukashenko, dubbed "Europe's last dictator" by the United States, remains firmly in power after recently sending in riot police to break up the country's biggest anti-government demonstrations in years and arrest hundreds of protestors. With the opposition divided and and Lukashenko, 51, enjoying the backing of Russian President Vladimir Putin -- who wants to avoid the emergence of yet another pro-Western government in his back yard -- it doesn't look as if Belarus will be able to follow Ukraine's example of a peaceful popular revolution anytime soon.

The opposition had rallied up to 10,000 supporters last week to protest against alleged vote rigging in the March 19 presidential election which gave Lukashenko 83 percent of the vote, the best result in his 12 years of authoritarian, Soviet-style rule.

The Organization for Security and Cooperation in Europe, which had dispatched over 500 observers to monitor the voting and counting, said the election had been "severely flawed due to arbitrary use of state power and restrictions on basic rights." The group said the government had "contributed to a climate of intimidation and insecurity" by associating the opposition with terrorism and by harassing and detaining civil society activists.

State employees and students were pressured to vote for Lukashenko and the vote count itself was "highly problematic", with results completed in pencil in many cases, and observers being prevented from seeing the marks on the ballot, said the OSCE.

Opposition leader Alexander Milinkevich issued a statement on Sunday saying: "A government, which with bestial savagery ... scattered peaceful demonstrators, has completely destroyed its authority and lost the people's support. We are determined to continue mass protests against the falsification of the results of the elections. We will not wait five years to free the Belarussian people from the rule of those who long ago lost their legal and moral right to it."

But the protests appear to have lost momentum and Lukashenko seems undeterred by Western sanctions including a travel ban on him personally by the European Union and United States. His government said the EU and Washington were "on the verge of anti-Belarussian hysteria" in condemning police action to break up a rally on Saturday and accusing Lukashenko of falsifying elections.

Milinkevich's spokesman Pavel Mazheika told Reuters no more protests would be held for the moment. "Street actions are only a small part of our strategy," he said after he was briefly detained by police.

In the early hours of last Friday, special police in riot gear had moved in to clear a tent camp on the capital's October square where opponents had staged a five-day vigil in freezing temperatures. They detained 460 demonstrators and took them to an interior ministry prison. "The revolution is over," one police commander said. Hundreds of opposition activists had already been arrested in the days before.

On Saturday, riot police with shields and batons dispersed a demonstration where Milinkevich, who officially got 6 percent of the vote, had declared the creation of the "Popular Movement for the Liberation of Belarus."

What happened after that suggests the opposition is still too divided to organize a common front. A second opposition leader, Alexander Kozulin, called on several hundred protestors to march to the prison where detained demonstrators had been taken the previous day. Here police beat their shields with truncheons, stopped the march, fired stun grenades and charged protesters. At least two people were taken to the hospital. 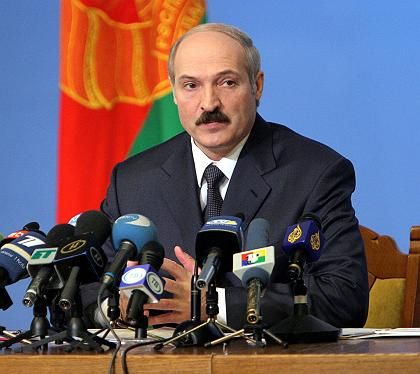 Milinkevich said the march had been a mistake. He accused Kozulin of foolhardiness in leading protesters away in a march after what he called a successful rally. Kozuli's staff retorted by calling Milinkevich a coward. Kozulin, who also ran against Lukashenko, was detained by police.

The protests have put Russia, which endorses Lukashenko's victory, at odds with the United States and western Europe.

On Sunday evening, up to 100 mostly young people gathered in silence at a monument in central Minsk to place candles on the ground in solidarity with those detained.