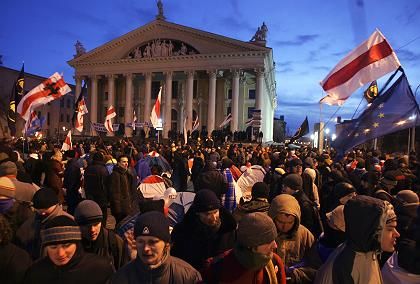 Hundreds of protestors shivered in the freezing cold on Tuesday morning, trying to keep up the momentum of a popular drive to overturn the election results from Sunday that gave Belarus' authoritarian president, Alexander Lukashenko, a third term in office. But there are ominous signs that the man dubbed Europe's last dictator is starting a crackdown against opposition forces. Security forces reportedly arrested several opposition activists.

Lukashenko remains defiant in light of international criticism calling the election results everything from a farce to flawed. On Monday, he said that his foes had failed to topple him in a foreign-backed "revolution." He scorned the opposition and said the election had shown "who's boss" in Belarus. "The revolution that was talked about so much  has failed" he told a nationally televised news conference.

Once the Central Election Commission announced that Lukashenko had received a Soviet-style 82.6 percent of the vote, 10,000 people braved the cold and the fear of a crackdown to protest in Minsk's October Square on Sunday night. But any hopes that this number might swell to a much larger crowd such as those witnessed in Ukraine in 2004 and Georgia in 2003 have been disappointed. By Monday night the numbers were starting to fall off, with only around 7,000 protestors attending.

Around 500 demonstrators then braved the sub-zero temperatures and driving snow to stage an overnight vigil in their small tent city, reminiscent of the much larger encampment in Kiev's Independence Square in 2004. Supporters brought the protestors sleeping bags and food. "We plan to stay here overnight and to stay until the moment when the vote is pronounced falsified, when the authorities admit this and a new election is announced", one young man, only giving his name as Alexander, told the Associated Press.

Although the authorities have allowed these rallies to go ahead, on Monday night riot police in helmets and camouflage uniforms took up positions in the side streets around the square, stopping those who wanted to join the gathering by checking documents. Opposition leader, Alexander Milinkevich, said his two sons had been detained by the police for an hour as they were on their way to pick up food for the protestors, and according to a spokesperson for Milinkevich, four men were arrested as they were leaving the square in the early hours of Tuesday morning. One of them was the well-known opposition figure Anatoli Lebedko. According to other reports, dozens of opposition activists and independent journalists have been detained over the past two days. Some court hearings had already opened in Minsk on Tuesday morning and rulings are expected later in the day.

Speaking at the rally on Monday evening, Milinkevich, who has branded Lukashenko "an illegal, illegitimate president," said "People want to stay until victory and I'm with them." On Tuesday morning as protestors sang and cheered "Long live Belarus" Milinkevich told them their cold night in the square "will be in the history books." "We have begun the real struggle for freedom, truth and justice," he said.

In the early hours of Tuesday morning there were also reports of a few scuffles with the security services and some demonstrators said that they were prepared to protect the camp site against a possible police attack. Milinkevich and another opposition candidate Alexander Konzulin, called on their supporters to come to another rally on Tuesday evening.

While the popular movement for a new election seems to losing momentum, the international community has continued to criticize the manner in which the elections were held.

Alcee Hastings, President of the Organization for Security and Cooperation in Europe said on Monday that the election did not meet the standards for a free and fair vote. "Arbitrary use of state power and widespread detentions showed a disregard for the basic rights of freedom of assembly, association and expression." The OSCE had had sent more than 400 election observers to the country. Europe's main human rights body, the Council of Europe, described the elections as a "farce."

The EU is threatening to impose diplomatic and financial sanctions against Belarus' leaders, and it is considering targeted sanctions by freezing overseas bank accounts of senior Belarus officials. Speaking for the rotating EU presidency on Monday, the Austrian Foreign Minister Ursula Plassnik said that the conduct of the vote was "far beyond acceptable." 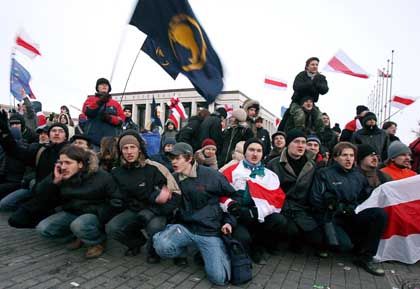 The White Hhouse press secretary Scott McClellan added to the international condemnation of Lukashenko's landslide victory. He said the election was flawed by a "climate of fear" and said "We support the call for a new election" and that "the United States will continue to stand with the people of Belarus."

The election has opened up another source of tension between Washington and the Kremlin, following US support for the fall of pro-Russian regimes in the ex-Soviet Republics of Ukraine and Georgia. The Russian President Vladimir Putin was quick to send Lukashenko a congratulatory message saying, "The results of the election demonstrate the confidence of the electorate in your policies."

It is uncertain what leverage the international community can have over Minsk, as Lukashenko can rely on Russia in the face of outside pressure. In particular, Belarus has access to cheap natural gas from its larger neighbor, thus providing economic security and stability. It is this stability that has been responsible for much of Lukashenko's genuine popularity amongst large sections of the Belarus people, particularly in rural areas.

Lukashenko also seems very confident that his election victory will stand and was dismissive of any outside threats such as sanctions saying he was "not afraid of further isolation," and adding, "If the EU wants problems here, it will have them."