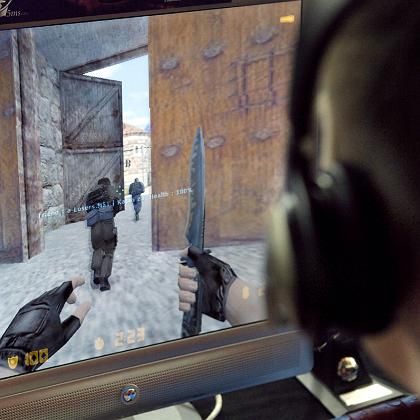 Players of "Counter Strike" take the roles of either terrorists or counter-terrorists who have to eliminate each other.

Sebastian B. was not the first player to recreate his school as a virtual environment for the computer game "Counter Strike" -- but his "map" became very famous. Last November, the 18-year-old high school student ran amok at his school in Emsdetten, shooting 37 people before killing himself.

The perennial national debate about violent media received new impetus as a result, with politicians asking if brutal computer games cause violence and if so, if they should be banned.

This debate has now entered the next level: Europe. EU politicians discussed a Union-wide regulation of violent video games on Tuesday in Dresden. Germany's justice minister Brigitte Zypries opened the debate by screening a two-minute excerpt from "Manhunt", a computer game where players get points for brutally killing rival players.

"The protection of children knows no borders," said EU commissioner Franco Frattini. During the three-day conference, a general action framework was drawn up. However the actual banning of computer games will continue to be the responsibility of individual member states.

Cross-border cooperation will begin with an analysis of what regulations are already in place in different countries. Following that, Brussels plans to publish a blacklist of banned games on a website called "InSafe" as well as developing closer relationships with game producers and Internet providers over the next few years. Europe-wide standards and under-age control are the long-term goal of the initiative.

This doesn't go far enough for Bavaria's interior minister Günther Beckstein. He wants an outright ban of games with realistic killing scenes -- dubbed "Killerspiele" ("killer games") in Germany -- on the Internet. But this could be difficult due to the global and unregulated nature of the Web: "We can't ban anything on the Internet. We might as well try to stop the rain," Zypris said, commenting on the proposal.

Beckstein wants to take the case to the Bundesrat, the upper house of German parliament. His move comes at an apt time: Emotions are running high again after two 17-year-old men killed their friend's parents in an extremely violent attack last Saturday in the village of Tessin in the state of Mecklenburg-West Pomerania.

In the absence of any clear motive, police are investigating the gaming background of the two high school students. Both were actively involved in their school's after-school computer club, reports the regional newspaper Schweriner Zeitung. Police are now checking their hard drives to determine whether the two -- described by locals as "friendly and polite" -- also used to play "killer games."

If things go according to Beckstein's plans, the possession and distribution of games with realistic killing scenarios could become a criminal offence punishable by prison or fines. But, argues Zypries, "a ban on material that glorifies violence is already in place." In her opinion, Germany's three-tier system based on age limitation, classification and prohibition is enough.

Whether a link between violent games and violent behaviour really exists is controversial. One argument is that consumption of violent media increases aggression because it desensitizes emotional response -- but it is unclear if this translates into actual violence or if people attracted to violent media may have more aggressive personalities in the first place.

The "copycat" thesis -- which posits that playing violent scenarios triggers imitation in real life -- is countered by the argument that brutal games may actually reduce violence: Rather than taking it out on the real world, players satisfy aggressive instincts in the virtual one.