At least they want to keep talking. Even as opposition protests on the streets of Beirut begin their third week, all parties involved in Lebanon's ongoing government crisis say they want to negotiate. Even as the demonstrators themselves say they are interested in one outcome only: the end of Prime Minister Fuad Saniora's government.

Still, in a series of discussions with SPIEGEL ONLINE carried out this week (excerpts below), a number of representatives from several of the parties that make up Lebanon's political mosaic kept emphasizing unity over division, consensus over partisanship.

"We support forming a national unity government to contain the situation and reduce the tensions," Saadallah Mazraani, vice secretary general of the opposition Communist party said in an interview. "We want to return to the negotiating table."

Similar sentiments are heard on the other side of the standoff.

"We want a unified country," said Tourism Minister Joseph Sarkis of the pro-government Christian party Lebanese Forces. "We want a modern Arab country that is independent from all outside influences, whether they be regional or from further abroad."

Nevertheless, just what a national unity government should look like, or even what independence means, remains a matter of controversy. And on Thursday, a way out of the face-off between the government and the opposition -- which includes Hezbollah, Michel Aoun's Christian party, and the Communists -- seemed as elusive as ever.

Arab League Secretary General Amr Moussa, in Beirut this week to broker a solution between the government and the opposition, had been hoping that success was at hand. Moussa had expressed optimism following an "extremely positive" meeting with Hezbollah leader Sheikh Hassan Nasrallah on Tuesday. He was likewise optimistic after talks with Lebanese Prime Minister Fuad Saniora on Wednesday. On Thursday, though, he said that more talks were needed.

"We want to reach a formula of no victor, no vanquished  a win-win situation," Moussa told reporters on Thursday.

The failure means that the protests in central Beirut will likely continue, and the pressure on Saniora's government will remain intense. Protesters are demanding that the opposition be given more influence in the cabinet. They say the Saniora government is unconstitutional because it fails to represent all religious factions in Lebanon, as required. Hezbollah and its allies withdrew their six ministers on Nov. 25, resulting in a lack of Shiite representation -- and the current constitutional crisis. 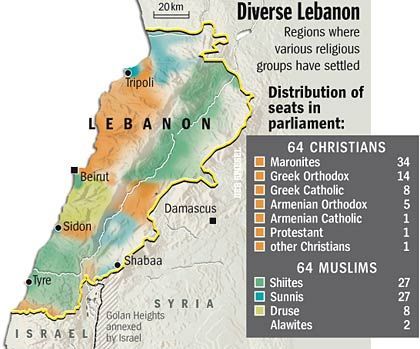 But the Saniora government has vowed to carry on, arguing that the cabinet remains at two-thirds strength -- the minimum necessary under Lebanon's constitution. The government also has the support of a majority in the country's parliament, and it claims to have widespread public support. Saniora's allies point to the massive turnout in late November when 800,000 people took to the streets to oppose the assassination of anti-Syrian Minister Pierre Gemayel. Hezbollah, they claim, represents the long arm of Syrian influence within the borders of Lebanon.

Hezbollah and other opposition parties, for their part, point to their own public support. An equal number of demonstrators took to the streets on Dec. 1 to rally against the government, which the opposition says is little more than an American puppet. They want to see the Saniora government dissolved and are demanding greater veto powers within the Lebanese cabinet.

"There is a US scheme for dominance that uses power, occupation and sedition to achieve its aims," Mazraani told SPIEGEL ONLINE. "The US scheme against the region has many arenas and Lebanon is one of those."

The two sides also disagree on the creation of a UN tribunal to investigate and prosecute those behind the February 2005 murder of former Lebanese Prime Minister Rafik Hariri. Many suspect Syria may have been behind the assassination, and Hezbollah is virulently opposed to the tribunal. Indeed, the late November resignation of its ministers is seen as an attempt to block cabinet approval of the tribunal.

The Saniora government, though, approved creation of the tribunal -- and confirmed that approval on Tuesday after it was vetoed by pro-Syrian President Emile Lahoud. It now must be ratified by parliament, though the law-making body may delay addressing the issue until current tensions subside.

Arab League head Moussa is hoping to get the two sides to agree on a formula that would allow for the creation of a new representative cabinet. The plan sees expanding the government from its current 24 ministers to 30. The majority coalition would get 19 ministers and the opposition would get 10. One minister would be independent.

However, the opposition parties, along with Hezbollah -- which both the US and Israel consider a terrorist organization -- are demanding one-third plus one of the ministers, which would be enough to block any decisions by the cabinet.

SPIEGEL ONLINE spoke with representatives of many of the parties involved in the current stand off and presents excerpts of those conversations below:

Dr. Ahmad Fatfat is currently the Lebanese Minister of Youth and Sports and is a leading member of the Sunni Future Movement Party.

"We cannot accept the opposition demand that they be granted one third of the cabinet positions plus one. That would grant the minority the power to deadlock the cabinet. Accusations that the government lacks constitutionality as some claim are groundless. The government only loses legitimacy if the president is changed; if a new Parliament is elected; if the prime minister, God forbid, is assassinated or resigns; or when the third of the ministers plus one resign. Barring any of those scenarios, the government remains constitutional.

"We believe that Lebanon is in Arab country. This is the first thing. But what is also important is that this country enjoys independence and sovereignty free from outside interference. We want this country to be recognized, especially by our brothers the Syrians (ed. note: Syria does not currently recognize Lebanon .)

"Our position on the Arab-Israeli conflict is that Lebanon will be the last Arab country that signs a peace treaty with Israel. It will also be the first Arab country to take part in a fight if the Arab states decide to start an open clash with Israel."

Ramzi Kanj is a leading member of the Christian political party Free Patriotic Movement led by Michel Aoun. The party has joined the opposition in its efforts to bring down the government of Prime Minister Fuad Saniora.

"We want to create a country that fully enjoys sovereignty, freedom and independence away from external interference from both the West and the East. We want to adopt the principle of true partnership and consensus in governing -- and not the current practice of a government which acts unilaterally. We will continue with the protests until we achieve these goals.

"The current government lacks legitimacy and constitutionality because the preamble of the Lebanese Constitution stipulates that any authority that violates the principle of coexistence and consensus among the sects is considered illegitimate and unconstitutional. Thus, Lebanon does not tolerate a government which prevents any sect from taking part in the making of political decisions."

Dr. Hussein Rahhal is the head of media relations for the Shiite party Hezbollah. His group, which maintains close ties to Syria , is behind the kidnapping of two Israeli soldiers in early summer which led to the war between Israel and Hezbollah. The group is considered a terrorist organization by the US and Israel.

"As for foreign relations, we feel that the country is quickly falling under the influence of the US in a way that negatively affects the independence and the sovereignty of the country and the internal interests of Lebanon. The US Ambassador in Beirut regularly interferes in Lebanese internal affairs and makes regular requests to ministers, officials and heads of banks.

"In brief, this government lacks the ability to run the affairs of the country. The national interest necessitates changing the government. Thats all we need."

Joseph Sarkis, a Maronite, is the Minister of Tourism and represents the pro-government, Christian party Lebanese Forces.

"The problem is not in the government. The government is now the sole official institution that is functioning. Our suggestion is to end the term of the current President Emile Lahoud, elect a new president, and form a new government that is fully representative of the political sects. We want a unified country. A modern Arab country that is independent from all outside influences, whether they be regional or from further abroad.

"Today, the Christians are faced with two clear projects. The project led by General Michel Aoun and the project of the rest of the Christians in Lebanon. It is their right to choose between them. We don't consider Michel Aoun's joining the opposition a division among Christians. On the contrary, it stresses that there is pluralism and freedom."

Saadallah Mazraani is the Vice Secretary General of Lebanon 's Communist party. His party has joined the opposition.

"What is currently happening in the region has a direct impact on Lebanon. There is a US scheme for dominance that uses power, occupation, and sedition to achieve its aims. The US scheme against the region has many arenas and Lebanon is one of those. US interest in Lebanon increased after the occupation of Iraq and after (US President George W.) Bush led a coalition to expel Syrian forces and intelligence from Lebanon.

"We object to the US scheme because it is contrary to Lebanon's interests. The tense relations between Syria and Lebanon are the fruit of the US influence in Lebanon. The US tries to use Lebanon to pressure Syria to change its policy or government. It is not in our interest that our country be used in this way.

"As for the current government in Lebanon, we have a number of objections to its conduct, especially during the last war. The government announced that it was not aware of the Hezbollah operation to kidnap the two Israeli soldiers. It said it was not responsible and did not support it. In this way, the government indirectly justified Israeli aggression. The government should have rejected the aggression and should have said that the kidnapping of the two soldiers is a Lebanese right consistent with the aim of releasing Lebanese prisoners in Israeli jails.

"We support forming a national unity government to contain the situation, reduce the tensions and return to the negotiating table To address the crises, we should go back to the basics of the Constitution. There are articles in the Constitution that were deliberately neglected for the sake of the Syrian alliance. Everybody, both Lebanese and Syrians, were involved in that. For example, Article 95 calls for doing away with the political sectarianism.

"We should all be involved in a comprehensive reform process to get rid of the sectarian 'small countries' within Lebanon. The sects have their own embassies abroad, their own ties abroad, their own schools, universities and hospitals and this is something we should get rid of. It creates more problems and affects the unity and the sovereignty of the country and opens the way for foreign interference and poses the threat of civil clashes."