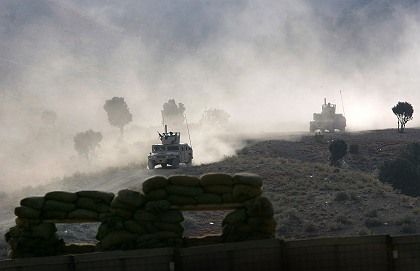 Southern Afghanistan has become increasingly dangerous. Some NATO countries, though, prefer to avoid the region.

What to do about Afghanistan? On the one hand, the 37 countries taking part in the North Atlantic Treaty Organization's mission in the country remain in the country trying to secure democracy and provide Afghanis with a future. On the other, fighting is on the rise -- as are tensions within the alliance. Some countries feel they are shouldering a disproportionate share of the wars risk and lethality.

It's not a difficult conclusion to arrive at. Countries like Canada, the Netherlands, Britain and the US have faced a fierce and rejuvenated Taliban in Afghanistan's southern provinces, while other countries -- like Germany -- have avoided conflict by staying in the relatively stable northern provinces.

Those in the firing lines are becoming increasingly unhappy with this state of affairs. NATO countries holding the southern part of the country have recently stepped up diplomatic pressure on their allies reluctant to put themselves more in harms way than they already are.

"We're pushing hard for as many allies as possible to lift the caveats on their forces and to be as flexible as they can," US Ambassador to NATO Victoria Nuland told SPIEGEL ONLINE. She said the moment was especially ripe given the upcoming NATO summit scheduled for late November in Riga, Latvia.

US Under Secretary of State Nicholas Burns, in Berlin on Monday for a defense conference, was more specific: "Wouldn't it be better if Germany and France  could be willing to have those troops sent sometimes on a periodic, temporary basis to help the Dutch, British, US and Canadians that are undertaking the major share of fighting?" he asked.

"Were calling upon the other NATO countries inside Afghanistan to similarly volunteer and participate in this difficult part of the mission where we are making progress," MacKay said in Ottawa in a speech to some 80 foreign diplomats, including many heads of mission from NATO countries.

The fighting in southern Afghanistan has steadily increased throughout this year, making it by far the most deadly since the invasion in late 2001. Canada, which commands NATO operations in the south, has lost 34 soldiers this year alone -- an overwhelming majority of the total of 42 lost since 2002. Only the US, with 282 deaths, has lost more.

Yet even as diplomatic pressure mounts, it may not, for Germany at least, be quite so simple. Sending German soldiers to participate in Operation Enduring Freedom was -- despite a sense of urgency following the Sept. 11, 2001 terrorist attacks -- a controversial issue. Caveats were included to prevent German troops from engaging in combat outside the areas of Afghanistan they are responsible for securing. Indeed, the German mandate sees its 3,000 troops more as a peacekeeping unit than as a combat force.

And any change to that mandate has likely just become more politically untenable. The tabloid Bild Zeitung on Wednesday published five photos disturbingly reminiscent of Abu Ghraib showing German soldiers playing with a skull found near Kabul. Allegations that German special forces may have abused Murat Kurnaz, a victim of the US practice of extraordinary rendition, in an Afghani prison have also been on front pages recently.

In other words, try as the German army might to reinforce the image of the friendly Bundeswehr soldier helping the helpless in poverty-stricken Afghanistan, real life seems to be getting in the way.

Up until now, keeping troops in Afghanistan incurred few political costs for the government. Indeed, the mission was extended for another year in late September. The caveats, though, remained in place -- hardly the message NATO wanted to hear as the Riga Summit approaches.

Germans would argue that they already are doing all they can. Not only do Germans have troops committed to hotspots around the world, but those in Afghanistan are responsible for huge swathes of the north. "The north is extremely important, and they do it well," Nuland praises.

Plus, as Stephan Bierling, professor of international politics at Regensburg University, argues, "German politicians and the German public believe that security has only a financial price and that participation in multinational operations is a value in itself."

On the ground in Afghanistan, though, the point of view is slightly different. There have been more attacks against NATO forces this year than any other since the 2001 US invasion. And opium production now accounts for some 60 percent of Afghanistan's gross domestic product, according to an estimate earlier this month by Supreme Allied Commander US General James Jones. The Taliban, he indicated, weren't shy about profiting from the drug trade. "We're losing ground and it bothers me," he said.

Other military leaders in the country have pointed to the caveats as being partially responsible for the loss of ground. Indeed, even as ISAF commanders have some 31,000 troops at their disposal, they are limited in their ability to move them around as necessary.

"Wouldn't it be better if our NATO commanders had the ability to shift troops from the north or west to help where our offensive is underway in the south and east?" Burns asked on Monday. "That is currently not possible because unfortunately so many of our NATO countries have put restrictions on the use of their military forces."

NATO Secretary General Jaap de Hoop Scheffer has backed calls by General Jones to send up to 2,500 more troops to the troubled south. But NATO and its allies have not managed to get some governments reluctant to enter the Kandahar region to step forward. The Secretary General did applaud the additional almost 1,000 Polish troops and several hundred Danes, Czechs and Romanians that have either recently gone or are currently making their way there. "Many nations have stepped up to the plate," he said.