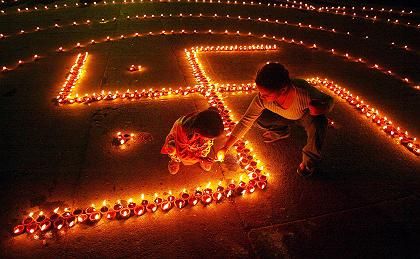 The swastika is a sacred symbol for Hindus, who are protesting its proposed ban in the EU. Here Hindus in India celebrate Diwali by lighting lamps in the shape of a swastika.

Germany's plans to push for a Europe-wide ban on swastikas may seem reasonable enough to those who prefer not to see far-right extremists sporting Nazi symbols in public. Unless of course, you are a Hindu, for whom the Nazi era is just an unpleasant blip in the millennia-old symbol's history.

European Hindu groups have come together to oppose a German proposal to introduce a ban on Nazi symbols -- including the swastika -- within the European Union, arguing that the Nazis hijacked the Hindu symbol.

"The swastika has been around for 5,000 years as a symbol of peace. This is exactly the opposite of how it was used by Hitler," Ramesh Kallidai of the Hindu Forum of Britain told Reuters. The swastika is commonly used as a blessing in Hindu rituals such as weddings.

"It is almost like saying that the Ku Klux Klan used burning crosses to terrorize black men, so therefore let us ban the cross," he added. "How does that sound to you?"

Germany, which took over the six-month rotating presidency of the EU at the beginning of this year, wants to launch an initiative to make Holocaust denial and the display of Nazi symbols a crime across the whole EU. The swastika and other Nazi symbols are already banned in Germany.

"In Germany the fight against racism and xenophobia is both an historic duty and a current political concern," Germany's Justice Ministry said in a statement earlier this month.

Kallidai said Germany's initiative was probably well-meaning but said that Hindus had not been consulted.

"Every time we see a swastika symbol in a Jewish cemetery, that of course must be condemned. But when the symbol is used in a Hindu wedding, people should learn to respect that," he told Reuters.

"In Sanskrit it means May Goodness Prevail," he said. "Just because Hitler misused the symbol, abused it and used it to propagate a reign of terror and racism and discrimination, it does not mean that its peaceful use should be banned."

Even within Germany, the swastika ban can be problematic. There was an outcry last year when the owner of an anti-fascist mail order company in Stuttgart was fined for selling anti-Nazi merchandize featuring swastikas with a line through it.