In the Hands of the Madam

The unknown woman sliced Joy’s* skin with a razor blade more than a dozen times, first above her chest, then in her genital area. Afterward she rubbed black powder into the wounds. It may have been charcoal or something else. Joy doesn't know for sure. She doesn't like talking about what happened to her back in December 2014 when she was 17.

The dark ritual was part of a religious practice - "Juju," aka Voodoo - from her West African homeland. The woman who performed the ritual was her "madam," as the women in charge of trafficking young female Nigerians are known. They recruit them in their homeland before smuggling them to Europe and forcing them into prostitution. Virtually every victim has to endure the Juju spell. The ritual is meant to ensure that the women pay their debts and prevent them from running away or going to the police. Most believe in it, though very few know what really awaits them once they arrive in Europe:

Joy was unable to escape this hell for two years. She was forced to deliver at least 1,100 euros ($1,240) to her madam every week, she says, though more was better to avoid beatings. What little money she had left she spent on food and makeup, which she needed for her job as a prostitute. In all, Joy estimates she earned somewhere between 50,000 and 60,000 euros, amounts the Frankfurt police’s criminal investigation division says comport with its own empirical evidence. Joy first sold her body in Mannheim, then in Mainz. The whole time she kept thinking about the Juju and the evil effect it would have if she broke her vow: illness, suffering - or worse. And then there were the very real death threats against her family in Nigeria.

Her torment didn’t stop until a woman approached Joy and asked if she believed in God. At that moment, Joy felt saved. She was placed in the care of Women's Rights Are Human Rights (FIM), a victim protection organization that helps migrant women in Frankfurt and works closely with local investigators.

The trafficking of Nigerian women isn’t a new phenomenon for the Frankfurt police, but the problem has intensified as the number of female refugees from the country has ballooned. In 2016, the International Organization for Migration counted some 11,000 Nigerian women who crossed the Mediterranean to Italy by boat. That number is more than twice as many as in the previous year and almost eight times as many as in 2014. Some stay in Italy, while others continue their journey to other European countries. Of those who make it as far as Germany, some end up working around Frankfurt’s central train station. In this precinct, Daniel Kreuz* and his team of investigators from the police’s criminal investigation department focus on prostitution and human trafficking:

The United Nations Office on Drugs and Crime estimates that more than 90 percent of the women smuggled from Nigeria to Europe come from Benin City. But why there of all places? And how deeply is Juju anchored in the minds of the people in the region?

In the Land of Juju Priests

The traditional ruler of the region is the king of Benin, the "Oba." A devout Christian, he is also the spiritual leader of the Juju priests. Even today, he is still worshipped by large segments of the population as a god-like figure, and although he no longer holds much official power, his word is considered law by many. As the world increasingly began to associate Benin City with human trafficking and the shame became too much, the spiritual leader decided it was time to act. David Edebiri, himself a high dignitary, has spent many years as an adviser to the Oba. As a close confidant, he speaks on the king's behalf:

Juju spells, both good and bad, are ubiquitous in Benin City. Most residents are either Christian or Muslim, but they don’t see this hodgepodge of spiritual beliefs as a contradiction. Indeed, people respect - and fear - religion more than the power of the state. Vows made to gods, spirits or ancestors in a Juju ritual are taken seriously. But the unique religious composition alone isn't enough to explain why Benin City has developed into such a center for human trafficking and forced prostitution.

There are now aid organizations, such as Daughters of Charity, to help young women who return from Europe traumatized and destitute. Many of the girls who leave do so because of pressure from their families, says Bibiana Emenaha, the organization’s director. Since 2003, the specially established National Agency for the Prohibition of Trafficking in Persons (Naptip) has also been fighting the root causes of the problem in Nigeria.

SPIEGEL-Journalists with advisor Edebiri and assistants

One is a lack of opportunities. Nigeria is not only Africa's most populous country, it also has the largest economy of any sub-Saharan state. It is rich in raw materials like oil and gas and the agricultural and service sectors are growing, yet large segments of the population do not share in the prosperity. More than 62 percent of Nigerians live in extreme poverty. For many women, prostitution is the only way to make money:

The few women who do make it to Europe alive and return to Nigeria with money build mansions, buy cars or find other ways to flaunt their wealth. Often the madams do this as a way of luring more young women into prostitution.

Jennifer and Vivian once shared this dream. In the past, they would have flown to Europe with forged documents, but this got too expensive for the madams. According to the Frankfurt police, transport costs per flight, including forged documents and the subsequent smuggling that takes place upon landing in Europe, are around 10,000 euros a person. But the new route - through the desert to Libya and across the Mediterranean - only costs 1,500 to 2,500 euros. It’s cheaper, but more dangerous for the women being smuggled; they risk their lives taking the route:

Many women, like the two who have returned, have lost faith in the government. They lament rampant corruption and demand greater support from the state in helping them establish viable livelihoods. For these reasons, many people choose not to question the promises of getting rich quick in Europe. Jennifer and Vivian say they would do it again - only next time by air and not over the land route.

The head of Naptip, Nduka Nwanwenne, and the adviser Edebiri agree a ban issued by the Oba will considerably mitigate trafficking in Nigeria. It could even eliminate it, they say. But not everyone shares their optimism. Even if people in cities become more aware of the dangers of human trafficking, the problem will simply shift to the villages, says Sister Bibiana. Unsuspecting girls in slums can still easily fall prey to the madams and their middlemen. And as long as demand for cheap sex remains high in Europe, dealing in young girls will remain a profitable business model for traffickers.

In Germany, investigators suspect that after the ban by the Oba, more victims will at least be willing to cooperate with the police. For many women like Joy, the power of the king of Benin was tantamount to salvation:

* THE NAMES OF INDIVIDUAL INTERVIEW PARTNERS HAVE BEEN CHANGED TO PROTECT THEIR IDENTITY. THE IDENTITY IS KNOWN TO THE REPORTERS. 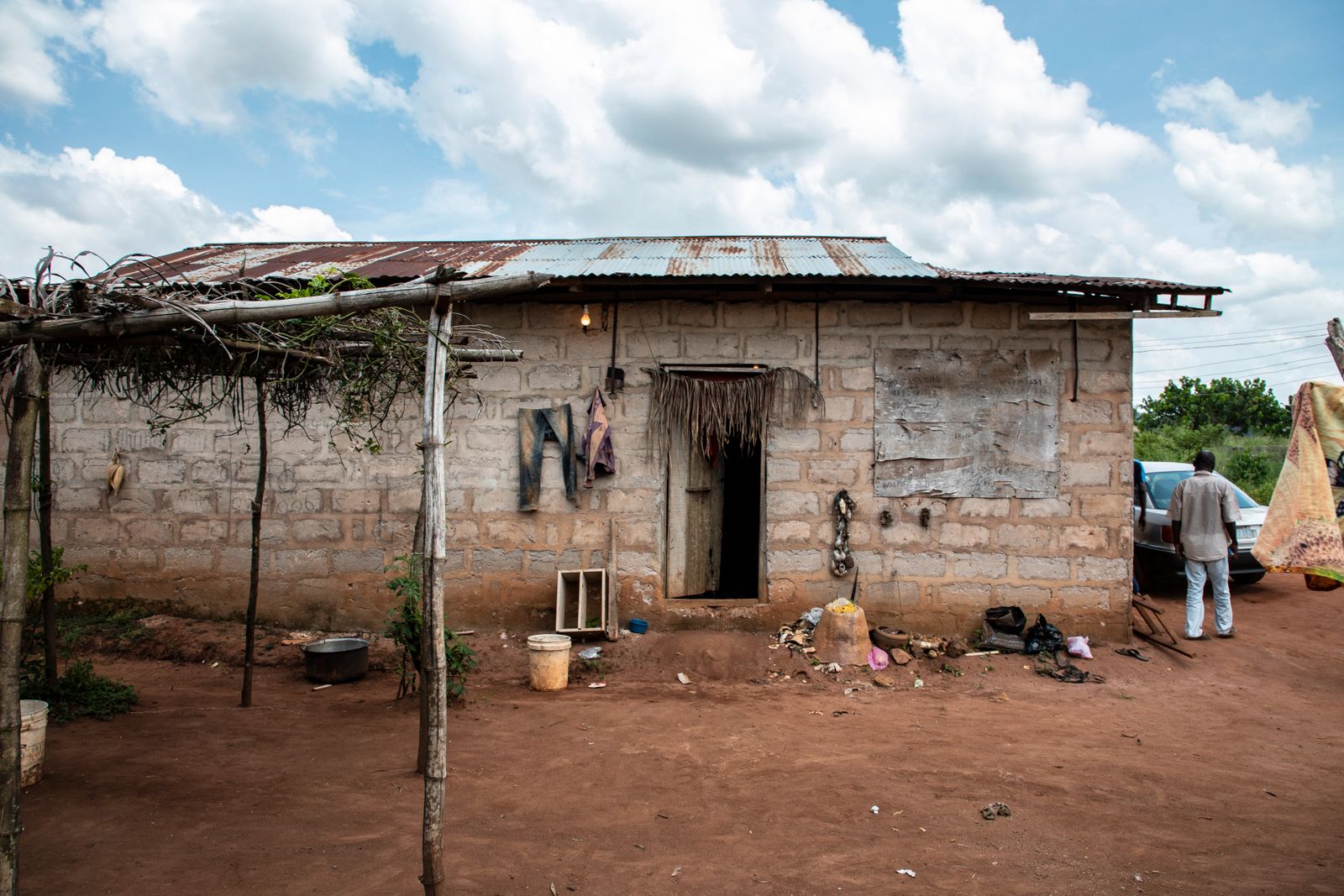 Inside this building in Benin City, Nigeria, a priest performs Juju-rituals 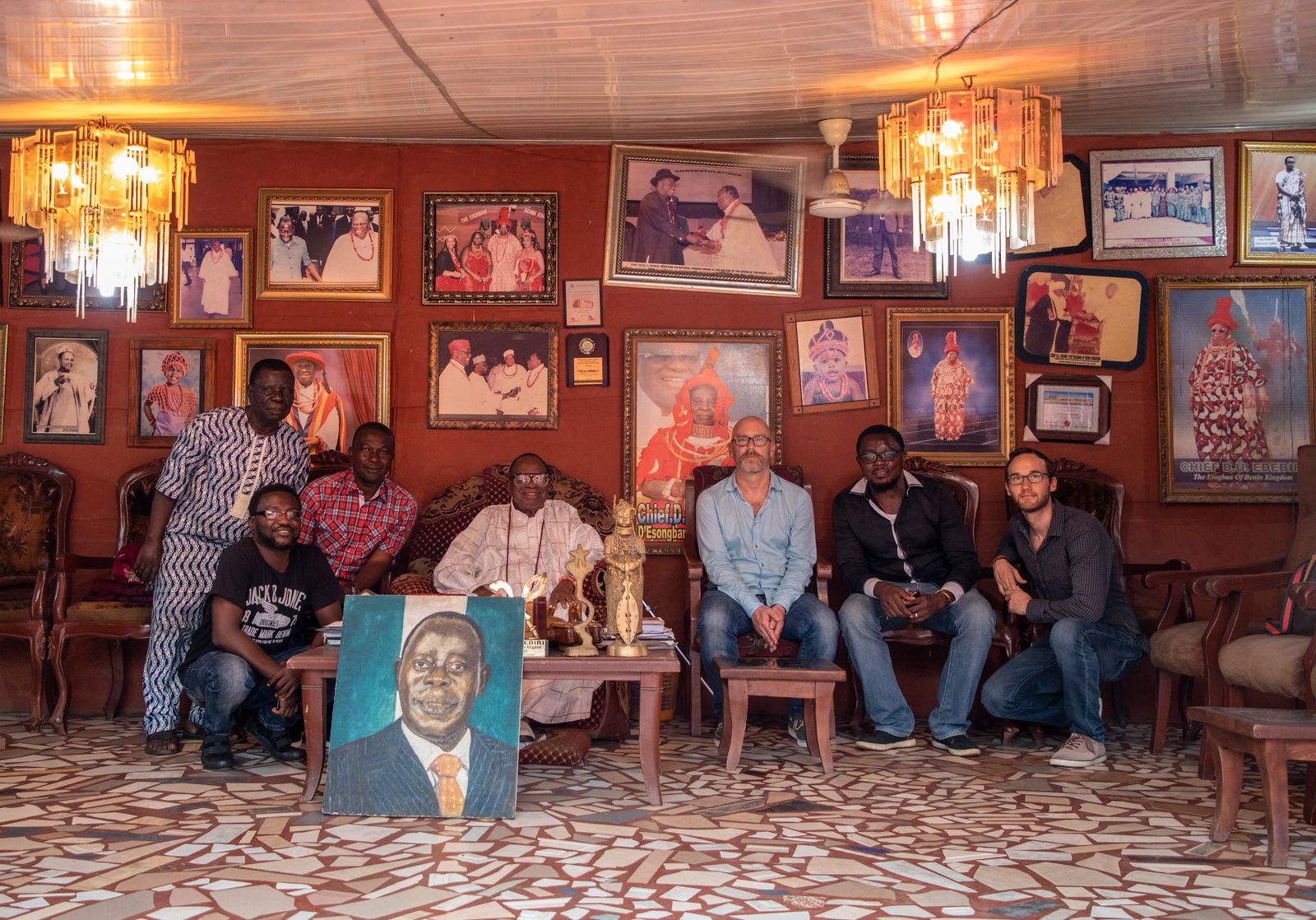 SPIEGEL-Journalists with advisor Edebiri and assistants