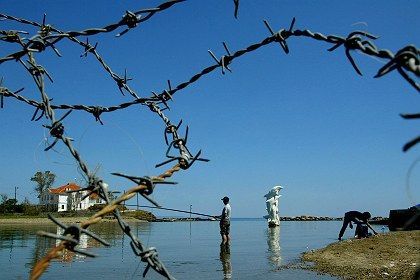 A Turkish man fishing near the town of Famagusta in Cyprus. The towns port remains closed to EU traffic.

It's a bet no Las Vegas bookie would ever make. Turkey is hoping that Cyprus can be forced to allow European planes to fly into Turkish-controlled northern Cyprus -- a state recognized by no country in the world except Turkey. That's the pot. That and a couple of white chips.

And what's at stake? If Turkey loses, its decades-long dream of European Union membership could finally fizzle out. Forty-six years of waiting, negotiating, reforming, convincing: wasted. No more future within the world's most powerful economy. It's a huge gamble and Ankara has shoved all of its chips to the center of the table. Problem is, Turkey's hand is terrible.

The issue, of course, is Cyprus. Less than a week before the European Commission releases a report on Turkey's progress toward joining the EU, the country still hasn't fulfilled what would seem to be an elemental requirement: opening up its ports to all EU members. Cypriot ships remain unwelcome in Turkey. The EU is not impressed -- and Turkey's going to hear about it on Nov. 8.

"If this situation continues, Turkey's accession is doomed to failure," said Heinz Kramer, an expert on Turkish progress toward EU membership with the German Institute for International and Security Affairs in Berlin, referring to the ongoing stalemate over Cyprus.

According to a draft copy of the European Commission report obtained by the Financial Times Deutschland earlier this week, the rebuke will be twofold. Ankara will be chided for not having made sufficient progress towards eliminating torture in its prisons and providing better protection of the freedom of speech. But Cyprus is the real threat. Turkey, after all, signed the so-called Additional Protocol, which obligated it to open its borders to trade with the 10 new EU members who joined in 2004, including the Greek-dominated Republic of Cyprus.

So why doesn't Turkey just open up its ports and be done with it? The benefits of becoming an EU member must surely outweigh those of holding on to the northern tip of the rocky Mediterranean island of Cyprus. Don't they?

Perhaps. But this scale isn't perfectly balanced. From Ankara's perspective, the EU needs to fulfil its own obligations before Turkey throws any bones to Cyprus. Some progress has been made: Distribution has begun of the €259 million ($329 million) aid package pledged to Turkish-dominated northern Cyprus in 2004. The funds were partially intended as compensation from Brussels after the EU allowed Cyprus to join despite the unsettled dispute on the islands. But it was also a gesture of gratitude for Turkish Cypriot's support of United Nations Secretary General Kofi Annan's plan to reunify Cyprus.

The EU also promised to open up direct links with the Turkish portion of Cyprus -- including the port of Famagusta and Ercan International Airport. Indeed, the Turks estimate that direct flights from Europe -- and the hordes of tourists they would deliver to area beaches -- could bring in as much as €1.5 billion per year for northern Cyprus. The promise, though, has so far gone unfulfilled. The Cypriots have blocked the deal in the European Council.

"The Cypriots are not easy people"

On the record, the EU will tell you that linking the two issues is unacceptable. Off the record, you get a different story.

"Officially nobody accepts the linkage," an EU source close to the Turkish accession negotiations, told SPIEGEL ONLINE. "But politically, everyone is aware that it is part of the same game. ... The Cypriots are not easy people. They want Turkey to open all ports and then officially recognize Cyprus without giving them anything in return." 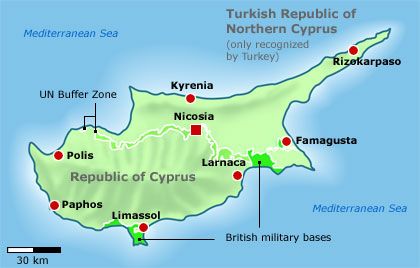 Cyprus has been divided since 1974.

The Finnish EU presidency began a last ditch effort this week to ward off the seemingly inevitable clash. The offer involves loosening the EU embargo on the Turkish north of the island but sweetens the pot for Cyprus at the same time. The Turkish side would hand over control of the former-resort-turned-ghost-town Varosa to the UN, a precursor to it being reunited with the Greek side of the island.

The Cypriots, though, seem in no mood for compromise. In an e-mail to SPIEGEL ONLINE this week, Cyprus Foreign Minister Yiorgos Lillikas wrote that his country's position hasn't changed: Turkey must remove restrictions on Cypriot ships and planes without demanding anything in return.

"Instead of unconditional fulfilment of its EU obligations, Turkey tries to introduce totally unrelated issues, i.e. the opening of the illegal ports and airports in the occupied part of Cyprus," Lillikas wrote, referring to the Turkish-controlled part of the island. "There is no room for negotiating and (for Turkey) getting something in exchange from the EU or from the member states."

When the Nov. 8 report is released, Ankara is expected to get a firm slap on the wrists. But Turkey has gotten bad marks before and the progression toward EU membership has continued. The real test for Turkey could be the December EU summit. Cyprus has indicated that it will push for tough penalties should Ankara continue non-fulfilment of the EU customs agreement.

Even without imposing specific penalties, Cyprus is in a position to make life difficult for the Turks. As a full member of the 25-member club, the Cypriots can block accession negotiations with Turkey every step of the way.

According to Volkan Bozkir, head of Turkey's diplomatic mission to the EU, they already have. "The opening chapters of the accession negotiations, even those without opening benchmarks," he complained recently to SPIEGEL ONLINE, "have been blocked by Cyprus with the support of Greece." Some chapters of the accession process have clearly identifiable steps -- benchmarks -- that must be met before negotiations can proceed.

Disagreement, accusations, recriminations. It's a pattern that's been repeating itself on Cyprus for decades. Greeks have been living on the island for millennia, but for contemporary Greek Cypriots, recent history begins on July 20, 1974. On that day, Turkish forces landed in northern Cyprus, eventually taking over some 36 percent of the island -- including Varosa and Famagusta. The island's population, until that time largely intermingled, separated.

While Turkey has officially recognized the Turkish Republic of Northern Cyprus, no other country in the world has. And for Greek Cypriots and Greeks, the "occupation" as they refer to it, is in clear violation of international law.

"Our aim," wrote Foreign Minister Lillikas in his e-mail, "remains to reach a solution that will ensure the reunification of the island, its territory, society, economy and people, with no presence of foreign troops on Cyprus' soil."

Sounds reasonable. But for Turks, who have been present on the island since the 16th century, the recent history of the island extends back quite a bit beyond 1974. For a large part of the 20th century, following the collapse of the Ottoman Empire in World War I, Greece was intent on reuniting the myriad islands dotting the Aegean Sea with the homeland. Cyprus, despite its geographical position just off the southern coast of Turkey, was, for many decades of the last century, seen as something of a crown jewel of that project.

" Cyprus is a national issue for Turkey "

The constitution did little to decrease mounting tensions on the island and Greece began shipping soldiers and weaponry to Cyprus. Turks, not unreasonable, feared that Greece was intent on taking the island by force if necessary. Throw the Greek military dictatorship into the mix and Turkish involvement -- ostensibly justified by the 1960 "right to take action" -- became inevitable.

When Greek Cypriots today speak of "reunification" of the island, Turks hear "Greek rule." Even more difficult for Turks to swallow: The current president of Cyprus, Tassos Papadopoulos, was part of the Greek Cypriot nationalist militia EOKA in the late '50s -- a group that was primarily interested in uniting Cyprus with Greece. Some have also accused Papadopoulos of orchestrating the Greek Cypriot "no" to the 2004 Annan plan.

Mistrust is rampant. And few in Turkey trust the Greek Cypriots to treat their Turkish counterparts well. "Cyprus is a national issue in Turkey," confirms Turkey expert Kramer. "For some it's security. For others it's honor. The vast majority still has a feeling that Turkish Cypriots are a part of Turkey and that they can't just be sold off."

In other words, simply opening up their ports to Cypriot ships just isn't in the cards.

History isn't the only hurdle. Turkey these days is not keen on sacrificing anything to join the European Union. A survey carried out last week by the Turkish daily Milliyet found that only one-third of Turks still support their country's EU membership aspirations. With elections next year, Prime Minister Recep Tayyip Erdogan has little incentive to jeopardize his political standing for the sake of getting a positive EU progress report. In short, solving the Cyprus problem doesn't appear to be super high on the list of Turkish government priorities at the moment.

That doesn't mean the country is willing to forget about membership. If there's one thing the Turks have learned through four and a half decades of membership talks, it is patience. And there is little chance, even if accession talks were to go well, that Turkey could become a member prior to a decade from now. "We're not talking about tomorrow," Turkish Ambassador Bozkir says. "We're talking about 10 years from now. Turkey will be a different country then. But for the time being, there is a relationship with the EU and it is not a new one."

Plus, Cyprus needs Turkey. If Turkey doesn't become part of Europe, Cyprus can forget about ever reuniting. There would be no carrots left to offer Turkey.

And what about the EU? After all, by welcoming Cyprus into the fold in 2004, Europe contravened its own intention of not admitting countries currently involved in territorial disputes.

The EU source close to Turkish accession negotiations says that the EU was worried that Greece was preparing to veto the 2004 10-nation enlargement if Cyprus was not included. "But there is a sense now within the EU that maybe (allowing Cyprus in) wasnt the most reasonable thing to do."