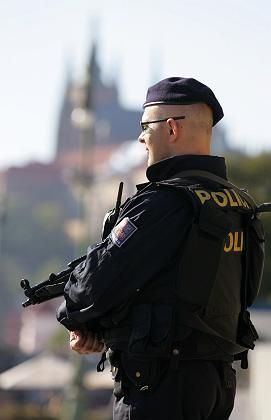 A policeman with an automatic weapon patrols central Prague Sept. 23, 2006, after security services issued their most serious warning of a terrorist attack.

According to the Czech Republic's leading newspaper Mlada fronta Dnes, Islamic extremists were planning to kidnap and kill Jews in Prague. The paper, quoting unidentified intelligence sources, reports that plotters had planned to hold the captives in a Prague synagogue.

The paper writes that the would-be kidnappers intended to make broad demands which they knew could not be met, and that they would then blow up the building, killing all those inside. The paper does not say whether arrests have been made, nor does it give details about the identity of the extremists.

The kidnapping threat would explain why the Czech Republic stepped up security measures in the capital two weeks ago. Armed guards were deployed on Sept. 23 at dozens of buildings, including train stations and tourist sites, after the government received intelligence that there could be an attack. Hospitals were placed on full alert and Ruzyne airport increased its anti-terror measures. Interior minister Ivan Langer spoke at the time of an increased danger of attack in the capital, saying the situation was "the most serious ever."

Prime Minister Mirek Topolánek and government officials have refused to reveal any further details of the threatened attack. Mlada fronta Dnes quoted Topolánek as saying only that "the measures and the extent of information supplied to the public were and are in proportion to the information obtained."

There have not been any previous attacks by Islamic extremists in the Czech Republic. The country has a small military presence in Afghanistan and has sent military instructors to Iraq to help train the police force.

Prague's Jewish Quarter in the Old Town is a popular destination for tourists, including many Jews, who visit the centuries-old synagogues and Jewish cemeteries. The city was once home to thousands of Jews, but that community was decimated during the Holocaust.