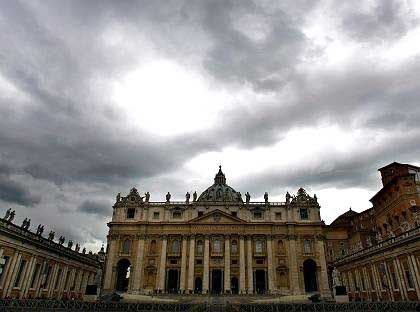 Rampant crime: Pickpockets on St. Peter's Square can just trot over an international border into Italy.

The Vatican's attorney general Nicola Picardi released the astounding statistic at the start of 2007: The tiny nation's justice department in 2006 had to contend with 341 civil and 486 criminal cases. In a population of 492, that measures out to 1.5 cases per person -- twenty times the corresponding rate in Italy.

By this measurement at least, crime is soaring in the Vatican in spite of a security force that would put a police state to shame. The seat of the Catholic Church has one Swiss guard for every four citizens, not to mention museum guards and police assigned to the Vatican by Italy.

Picardi did say that most criminal cases were matters of pickpocketing or purse-snatching. The rest amounted to other petty crimes like fraud and forgery -- committed not by kleptomaniacal nuns but by a handful of black sheep among the 18 million pilgrims and tourists who visit St. Peter's Cathedral, St. Peter's Square and the Vatican Museums every year. About 90 percent of these crimes go unpunished, which is not a measure of Christian mercy but a sign of the perpetrators' favorite method of escape. They can break for the border -- a few meters away -- to Italy.

Even if it did prosecute every pickpocket, the Vatican wouldn't have room in its jails for so many sinners, since it has no prison system. Criminals sentenced to prison in the Vatican have to serve time in Italy, with costs covered by the papal state.

Picardi releases similar alarming statistics almost every year, when he makes his annual report on the state of the Vatican's security. He'd like his country to join the Schengen Agreement, a 1985 treaty signed by EU nations to bring down border controls and allow cooperation among justice departments and police. Picardi would even like to promote cooperation between the Vatican and some non-EU nations. So far, though, he hasn't achieved either ambition.

Pope Benedict XVI recommended another strategy in a speech to Vatican security personnel. "Let us pray," he said, "for the maternal protection of the Virgin Mary." He may have been thinking of the weeks in April 2005 when Pope John Paul II was dying. A total of 6 million pilgrims arrived for vigils in St. Peter's Square, and not a single incident of pickpocketing was reported.