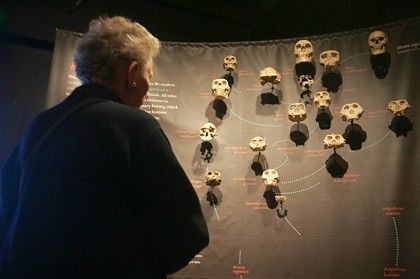 Was Darwin guilty of telling "sad lies?" Here, a display at the new Darwin exhibit at the American Museum of Natural History in New York.

Orzechowski is intent on keeping Darwinism from falling into the wrong heads. In a recent interview, he commented that it was "sad" that the "lie" of the evolution theories of Charles Darwin were being taught in Polish schools, and called for a debate on whether Darwin's theories should be purged from the school curriculum.

Orzechowski's position is not totally surprising. The minister belongs to the ultra-Catholic rightwing party the League of Polish Families (LPR), a junior partner in Poland's conservative government. Other European governments have been alarmed by the LPR's campaigns against gay rights, their purported anti-Semitism, their support for an abortion ban, and their calls for a re-introduction of the death penalty (something which would be illegal under European Union law).

Orzechowski believes that creationism, which he described as a "truth of civilization" that has been "confirmed by thousands of generations", should be taught instead of Darwinian theories. The Darwinist idea that apes and people were related was "pseudo-science" for "non-believers," he said.

The LPR politician appears to have a penchant himself for speculating on the factors determining human behavior. He personally seems to favor nurture over nature as an explanatory principle, at least when it comes to Darwin himself: he postulated that the Victorian scientist was perhaps lacking "inner fire" due to his vegetarian diet.

Orzechowski is not the first in the LPR to come out in favor of creationism. LPR Member of the European Parliament Maciej Giertych organized a creationism conference at the European Parliament in October, where he said Darwinism should not be taught in schools. Giertych, who is a biology professor by trade, claimed that humans had had contact with dinosaurs and that Neanderthals continue to live among us. The MEP had also calculated the weight of Noah's Ark, arriving at a figure (including animals) of 14,000 metric tons (15,400 US tons). Other parliamentarians are reported to have reacted with predictable amusement to his claims.

Maciej Giertych also happens to be the father of the LPR's leader, Roman Giertych, who is Poland's education minister as well as deputy prime minister. Giertych junior has, however, distanced himself from Orzechowski's remarks, saying that the theory of evolution would continue to be taught in Polish schools -- "as long as most scientists in our country say that (it) is the right theory."

Orzechowski's comments have been greeted with angry protests in Poland. The country's scientific community has condemned Orzechowski and affirmed their support for teaching Darwinian theories of evolution. Prominent molecular biologist Maciej Zylicz told the magazine Nature that "the point that really requires further discussion is not evolution, but how a minister can say such stupid things."

Other dissenting voices indulged in some evolutionary speculation of their own. Young Polish demonstrators chanted that "Giertych in particular is descended from apes," according to the German daily Tagesspiegel. The Polish newspaper Nie had another theory of certain politicians' genetic background: it commented caustically that some people clearly had "donkeys rather than apes as their ancestors."