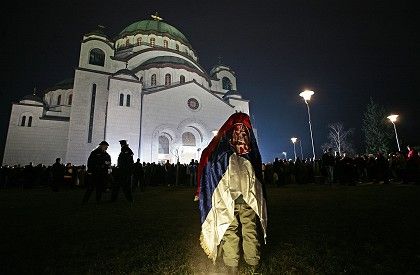 A Serb child wrapped in a Serbian flag during an Orthodox service on Monday in Belgrade.

The poet laureate of the United States, Charles Simic, who is an expatriated Serb (at the age of 15), quotes his father as saying, "It's exhausting to be a Serb." This was in a recent autobiographical article in The New York Review of Books.

It has been even more exhausting for those who have to deal with the Serbs and with the consequences of their national illusions. Simic quotes family visitors in Belgrade, obsessed with a national history, as they recounted it, of "honor, heroic sacrifice, and endless suffering in defense of Europe against the Ottoman Empire, for which we never got any thanks."

The Serbian nation allegedly was victim of all but universal conspiracies. Traitors were responsible for all that went wrong - "Serbs stabbing each other in the back. A nation of double-crossers, turncoats, Judases, snakes in the grass. Even worse were our big allies, England, America and France."

I had a Serb neighbor and friend in Paris who, when I first wrote a newspaper article criticizing Slobodan Milosevic's Serbia in 1991 for invading Slovenia and Croatia, accosted me in the courtyard of our building to say: "I know why you wrote that! The American embassy told you to write that. The neo-Nazis in Germany are forcing America to back Croatia and crush Serbia!"

When I said it was not my practice to take my article subjects from the American ambassador (nor his to offer them), he said: "It's the pope then. He's forcing you to write these things; you're a Catholic and the pope is allied with the Nazis and Americans to destroy Serbia and Orthodox Christianity!"

This was an educated, even erudite man of aristocratic origins whom I had known for years, a connoisseur of art, a former official of an international cultural organization, thoroughly cosmopolitan, who had not even lived in Serbia since he was a child. I was dumbfounded. He never spoke to me again.

He's no longer alive, but I have wondered in recent days what he would have made of the Serbs' narrow vote earlier this month to sustain a "moderate" and "pro-Western" president against a challenger who had been a supporter of Milosevic's mad wars to create a "Greater Serbia" through crushing the autonomy of the Albanians in Kosovo and seizing all the areas in the other states of the former Yugoslavia where Serbs still lived? What would he make today of Serbia's renunciation of violence in reacting to Kosovo's declared independence?

National grievance and thwarted nationalism have been the curse of the Balkans since before the 19th century, beginning when the Turkish and Hapsburg empires began to break up because of their obsolete institutions and political decrepitude. They were incapable of a constructive response to the new national consciousness of former peasant societies, awakened by the French Revolution, the spread of literacy, the arrival of the forces of social modernization. These "new" nations were recovering, embellishing, or more often inventing, glorious tales of their past importance, robbed from them by imperial oppressors.

Serbia, the major western Balkan nation, by the 14th century was the most advanced of the region, distinguished from its western neighbors by its Orthodox religion and use of the Cyrillic rather than Roman alphabet. It ferociously battled the advancing Ottoman Turks, but was defeated in 1389 in an epic battle on Kosovo Field, the Serbian nobility massacred and Serbian independence ended. The Serbs have never gotten over it.

The Turks' subsequent rule of them was harsher than of the other Balkan states, favoring their Bosnian neighbors, many of whom converted to Islam and served the imperial Turkish government. This is at the source of the nationalist obsessions and paranoia which have been so conspicuous in Serbia ever since.

It is the last of the major states of Europe proper that is still outside the European Union (save for Norway and Switzerland, which have chosen separation). The EU has been using the pressure and promise of the rewards of membership to cajole the Serbs to support moderation, and like the UN, NATO and other institutions involved in sustaining Kosovo, to encourage the Serbs in their renunciation of violence, despite their inevitable and comprehensible rejection of Kosovo's declaration of independence.

The Kosovo independence issue is yet to be entirely settled, with Russia's undoubted veto of UN Security Council recognition of Kosovo's claimed new status, and Moscow's threat to reopen the separatist issues on several of its borders with western-sponsored states formerly part of the Soviet Union. Nationalist and ethnic tension is still a potent force. That is why Serbia's present turn away from a past distinguished by destructive nationalism could be so important a step for all of the Balkans and for Europe. It could make it much less exhausting to be a Serb. It could make it less disquieting to live in Serbia's neighborhood.