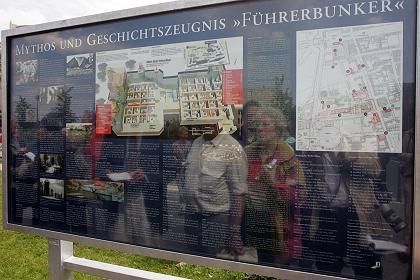 A new sign marking the location of Hitler's bunker in Berlin was unveiled on Thursday.

The recent success of the film, Der Untergang, in which the final days of Hitler's life in a Berlin bunker were painstakingly and dramatically depicted, exposed one of the continuing anomalies of modern German attitudes towards to the Nazi regime.

The film was warmly received and yet many filmgoers and tourists, especially in Berlin, were given to ask, "So, where was the bunker? Come to think of it, I've never seen a sign or anything"

Yesterday, an information panel was finally erected on the site of Hitler's bunker, providing images, a map and chronology of the events of 1945. The reason nobody had ever seen a sign marking the spot of the downfall of the Nazis was, quite simply, because there wasn't one.

The Germans, who in all other respects have ardently confronted and acknowledged the crimes of the Nazi regime, always stopped short of recognising the actual location of Hitler's bunker. The fear was that the site would become a point of pilgrimage for neo-Nazi skinheads. And, there was no moral imperative to identify its position, unlike say, the gas chambers at Auschwitz.

But Thursday, just one day before the opening of the World Cup where Germany hopes to relaunch its national image, the Berlin state government decided finally to oust the last Nazi-era taboo and officially recognize the place where Hitler killed himself. The information panel was unveiled by a Berlin-based historical society whose aim was to demystify the history of the bunker and dispel some of the rumours.

"Visitors to this area ... have until now never received information about this site," Dietmar Arnold, head of the Berlin Underworlds organisation said. "Tourists always ask the same question, 'Where was Hitler's bunker?'"

Arnold was reminded of a group of British war veterans to whom he gave a tour of Berlin. "They simply wanted to know, 'Where did the asshole kill himself?'"

Well, in fact it's a drab, unsuspecting location. On a car park, just 200 meters from the new Holocaust Memorial in central Berlin, surrounded by ugly, concrete apartment blocks, the new sign marks the location of the subterranean network of rooms and tunnels where Hitler desperately tried to cling to power.

"Our visitors are told absolute rubbish. Myths are maintained about the Fuhrer's underground motorway running to the Tempelhof airport," said Arnold. "Some talk about 12 secret levels or say that the bunker is still intact."

Rochus Misch, 88, is the last surviving member of the Nazi cadre to have inhabited the bunker, one of Hitler's bodyguards and a telephone operator. Yesterday, he attended the unveiling of the information board. He was able to point out the key features of the bunker even though it is now covered with concrete and grass.

"Roughly here stood the exit to the garden and his corpse was burnt here," he said. He confirmed that the bunker wasn't all that impressive. "Hitler's own room was just 12 square meters," he said.

Soviet troops destroyed most of the complex after the war. In the 1980s most of what was left was filled in with rubble, preventing access and burying the Nazi bunker for good.

Among those who witnessed the ceremony yesterday were tourists who emphasized the importance of marking the site.

"It's such an intense feeling to stand so close to evil," added Shawn Ludger, a young American tourist.

But others were not so convinced. "The panel now marks a place where people can pay homage to Hitler," said Edna Hohnfeld, an Israeli tour guide.

But, Parvinda Kler, an Australian tourist thought otherwise. "Today Germany is a free country that no longer needs to hide its history," she said.