It's all or nothing for chess grand master Vladimir Kramnik on Friday. There are just three games left in his match with the chess computer "Deep Fritz." He managed a draw in the first game, lost the second and drew the third.

That adds up to almost a must-win situation on Friday if mankind is going to win out against the machines. And if he loses, the series is decided -- in favor of Fritz.

But Kramnik wants to get at least one win out of the series. Should he triumph on Friday, he still has a chance to win the €500,000 prize money he stands to take home. But to get there, he has to win two of the remaining three games.

And there have been indications that he might be up to it. Even though he hasn't yet beaten "Deep Fritz" in the series, he has held his own. Indeed, in the one game he did lose, on Monday, he was dominating the computer before committing a costly blunder. Focused as he was on his own strategy, he somehow missed the dangerous trap the computer had prepared for him. His black king had nowhere to run when the white queen came calling.

Indeed, the loss could very well have made history. Never before has a tournament involving a grand master seen a checkmate from a single move.

Still, he came back strong in the third game and played brilliantly at times. In the end, though, all he could manage was a draw. Indeed, it looks as though "Deep Fritz" has been vastly improved since the last time the two played in 2002. In that series, Kramnik won the first three out of four matches before running out of steam and managing a four points to four draw. 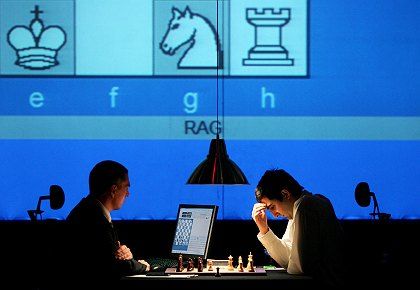 Vladimir Kramnik has his work cut out for him against Deep Fritz.

Should Kramnik lose on Friday, he would be unable to win the series. He would, in fact, have to win the final two just to manage a draw. And with "Deep Fritz" playing well, winning two in a row looks a difficult task. And should he lose the series? That, say observers, would be the end of an era. It would mark the first time that a grand master lost a series to a computer. Humans would no longer be able to keep up.