Open-cast coal mines may get a bad press, but in Germany they're still big business -- the country is the world's largest producer of lignite, or brown coal. Now another advantage of open-cast mines has been discovered -- they can conceal a rich seam of archaeological sites. 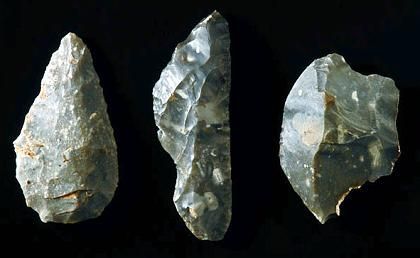 Archaeologists have discovered over 600 stone tools at the 120,000-year-old site.

Archaeologists have found the remains of a 120,000-year-old Stone Age hunting camp in an open-cast lignite mine near Inden in the German state of North Rhine-Westphalia.

"We'll never find such a camp ever again," archaeologist Jürgen Thissen from the Rhineland Commission for Historical Sites said in Bonn Monday. "There isn't another one in the whole of Germany."

He added that the find was the first of its kind in the region, and was of European importance.

Thissen and his assistants came across postholes of three shelters in the open-cast mine last August. Two fireplaces with traces of fires were also found, as were over 600 stone tools and the stone chips left over from their production. Among the stone tools found were a stone knife, serrated blades, and so-called "blanks" (pieces of stone ready to be shaped into tools).

A hand ax was discovered in the mine in December 2005, prompting a full excavation. The team of archaeologists used the mine's mechanical shovel to remove 30,000 tons of soil, laying bare 3,000 square meters of ground that had last been exposed during the Eemian or Sangamon interglacial era which lasted from 128,000 to 117,000 B.C.E. approximately.

According to Thissen, the camp would have been used temporarily by one or more groups of hunters and gatherers during a summer hunting expedition. The climate in northern Germany at the time would have been similar to the Mediterranean today.

News of the sensational new find comes just a week after the announcement that a prehistoric village had been found near Stonehenge in southern England. That village dates back only to 2,600 B.C.E., however -- practically newly built in comparison to the Stone Age camp.