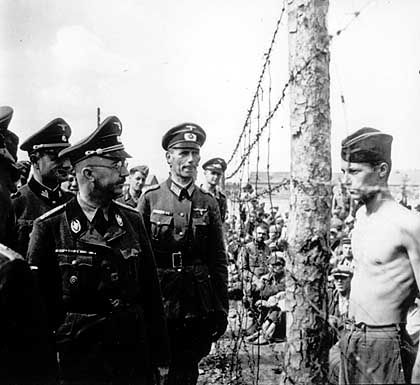 The SS under Heinrich Himmler relied on the Dresdner Bank for private loans.

Being known as the bank of choice for Heinrich Himmler's SS would be a PR nightmare for any company. So the long postwar reluctance of top Dresdner Bank executives to expose the bank's sordid history during the Nazi era is hardly surprising.

But the degree of Dresdner's complicity in many of the Third Reich's worst crimes will be shocking to many who read the results of a new seven-year study presented on Friday. A team of historians sponsored by Dresdner Bank engaged in intensive research to unearth the full extent of the darkest chapter of the bank's past. The massive study fills four volumes and nearly 2,400 pages in what amounts to an unprecedented look at the role of a financial institution in Nazi Germany.

"This calls it as it is. We accept these truths even when they are painful ones," said Wulf Meier, a member of the Dresdner Bank board, at a press conference in Berlin on Friday. He readily admitted the bank had been shy about delving into the past until public sentiment in the 1990s prodded several German firms to do so. "After 1945 many people and institutions avoided questions about their role during NS times."

Most German firms carry a heavy historical burden for what they did during the Nazi era. Dresdner Bank -- founded in 1872 on the initiative of a Jewish entrepreneur -- is no exception. Placing capitalist logic before morality, the bank systematically took part in the Third Reich's repression of Germany's Jews and the confiscation of Jewish wealth and assets.

The team of historians, led by Dr. Klaus-Dietmar Henke from Dresden's Technical University, took an exhaustive approach in compiling the bank's activities. After seven years of research costing €1.6 million, "Dresdner Bank in the Third Reich" paints a stark picture of how the firm actively courted Nazi favor in order to make money and rapidly expand its business.

"There was a deep symbiosis between National Socialism and capitalism," said Henke. Several of Dresdner's board members belonged to the Nazi party, but much of Dresdner's involvement with the party, Henke indicated, was driven more by business concerns.

As an example of Dresdner's implicit knowledge about the murder of Germany's Jewish population after their deportation to camps in Nazi occupied Eastern Europe, the study cites the bank's unwillingness to pay pension payments for retired Jewish Dresdner employees directly to the Reich. The Nazis claimed the government should get the pensions to pay for the deportees' living expenses, but Dresdner officials wanted proof that the Jews in the camps and ghettos were still alive. 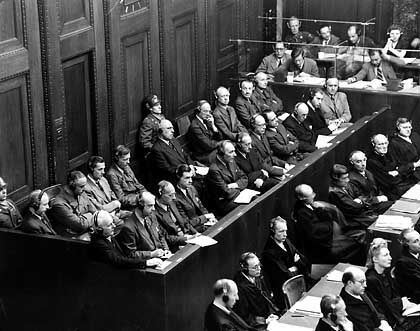 The Nuernberg trials sentenced former Dresdner Bank chairman Karl Rasche (back row, forth from right) to seven years in prison.

"Around 5 percent of Dresdner's workforce were Jewish -- a much higher percentage than the general population," said Dr. Dieter Ziegler for the Ruhr University in Bochum.

The study also shows the bank took part early on in the Third Reich's policy of confiscating Jewish property and wealth. "It's a myth that the bank was forced to take part in the 'Aryanizing' of Jewish wealth," said Ziegler.

But perhaps one of the most damning associations for Dresdner's past managers is its close ties to Heinrich Himmler's SS. The bank was the most important private lender for the Nazi organization and played a key role for its operations in occupied Europe, essentially acting as the bank of the SS in Poland.

Henke commended Dresdner for allowing his team to take such thorough look into the company's past and said he hoped it could encourage other firms to support deeper research into their activities during the Third Reich.