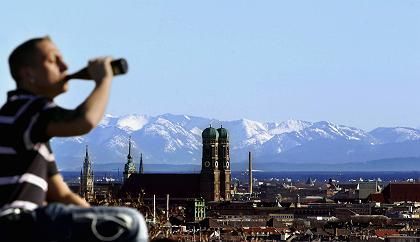 In most parts of Germany, including Munich, you can enjoy your tipple al fresco.

Groups of wasted teenagers swilling beer from bottles and leaving empties under the seat, must presumably be outlaws in Germany. As everyone knows, Germans are orderly, efficient, and clean -- a disciplined northern European population that would never put up with public drunkenness. In many cities it is the norm to impose fines for cracking open a beer in the park. And after all, Berlin isn't a Third World watering hole like Juarez or Tijuana. Or loose and French, like Paris or New Orleans. Right?

Wrong, wrong, wrong. Germany may have iron-cold weather and a militaristic past, but the right to drink in public is considered as natural as the right to vote. The drinking age starts at 16, so on a weekend night the U-Bahn in a major city tends to have at least one gang of kids swaying with the rattling train and belching up Beck's. British and American tourists get soused on organized tours and gleefully roam the streets with open bottles as soon as they learn it's "allowed" -- which, technically, it may not be. Parks during the summer fill with Berliners armed with bockwurst, a personal barbeque, and plenty of wine or beer.

Laws vary from state to state in Germany, but as a rule no one will fine you for drinking in public. Drinking on Berlin streets and on public transportation has technically been illegal since 1999, while drinking and barbecuing in parks is still protected by law; but all the prohibitions go unenforced, so that not every German even knows they exist.

Last summer, authorities in a few Berlin districts caused a controversy by trying to clamp down on the Teutonic tradition of public tippling. "Park visitors, riverside flaneurs, and romantics of the lake beware," wrote Die Tageszeitung in July 2005, "-- anyone who likes to wander through idyllic landscapes with a little beer or glass of champagne will now have to pay close attention to the map," because some Berlin districts (though not others) were sending out cops to warn and fine people for drinking in public. "The fact that parks don't belong to a city's 'streets,'" wrote the paper, "seems to be lost on certain local vigilantes."

The paper didn't miss its chance to whack American ideals of freedom: "So is Berlin turning into New York?" the paper wrote snidely. "Will everyone who opens a beer now have to hide it in a 'brown bag'?"

Happily, of course, Berlin hasn't fallen so far. The tide of small-time local alcohol fascists receded as fast as it rose, and the German capital is still freer -- when it comes to swilling booze -- than most of Europe, most of Asia, and (yes) most of the United States.