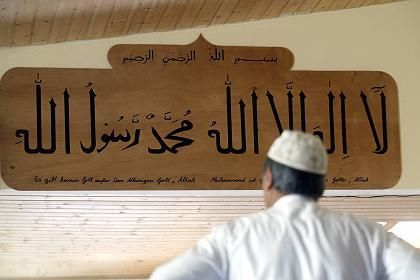 A member of the Ahmadiyya Muslim community in Berlin stands in front of a sign that reads, "There is no God but Allah." The community has just won approval for a new mosque in an eastern district of the German capital.

At the end of a rundown suburban street lined with bare trees and flaking apartment facades, a small group of people hold candles or colored Glo-sticks. A few hold signs -- "Democracy yes! Caliphate no!" -- and some carry German flags.

"The mosque is supposed to go up right here," says Günter Bronner, a blustery white-haired man with glasses pushed up on his forehead who's lived in the neighborhood for 42 years. He points to a drab piece of land at the end of the street where a defunct sauerkraut factory stands. "They want to have a minaret with a muezzin who gives the call to prayer five times a day. Can you imagine? Five times a day over our rooftops."

Officials gave the go-ahead last Friday for the Ahmadiyya Muslim Association to build a new mosque in Heinersdorf, an eastern neighborhood of Berlin where very few Muslims live. It will be the first mosque on the once-Communist eastern side of the city, and an organization of locals turned out Wednesday to protest. "It was pretty brazen to hand this (approval) to us as a Christmas present," quipped Joachim Swietlik, head of the citizens' group, who claims that 90 percent of Heinersdorf doesn't want the mosque.

Ahmadiyya initially presented plans for the mosque to district officials in the spring of 2005, and at the time there was no controversy. But Swietlik as well as others complain they know very little about the group, which currently worships in a single-family house in Reinickendorf, a neighboring district.

"They should build a mosque where their community is based," said Swietlik, a 42-year-old auto glazier who was raised in the former East Germany. "Or wherever a lot of Muslims live -- Kreuzberg, Wedding," he added, referring to the districts where many Turks who came to West Berlin under guest worker programs during the 1960s settled and had kids.

Ahmadis, though, aren't Turkish, and may not be welcome in Kreuzberg or Wedding. They're a largely Pakistani sect of Muslims established in India in 1889 by a man called Mirsa Ghulam Ahmed. Strict orthodox Islamic teaching sees Mohammed as the last prophet of God, and the Ahmadis agree -- but they also recognize "shadow prophets," less important messengers of God, and Ahmed counts as one of these. This wrinkle in their beliefs separates them from many other Muslims. The Pakistani government even declared them "not Muslim" in 1974, and in 1975 Ahmadiyya was kicked out of the Saudi Arabian-led Muslim World League.

The mosque in Heinersdorf is meant to be two stories high, with a 12-meter (40-foot) minaret, on the half-vacant sauerkraut factory site. The smell of frying oil wafts over the property from a nearby Kentucky Fried Chicken. Ahmadiyya admits it has no particular reason to build there besides the inexpensive land, but an Ahmadi mosque in Germany would not be unprecedented: There are 17 in the country already.

"In our experience, the protests stop as soon as we start to build the mosque," says the German head of Ahmadiyya, Abdullah Uwe Wagishauser, a 56-year-old former hippie from western Germany who converted to Islam in the 1970s. The group has no plans to oppose the protesters in Heinersdorf; in fact almost every mosque they've built has met with local protests and resistance. He says it's a classic case of not-in-my-backyard. "No one wants a mosque in their neighborhood," says Wagishauser.

The resistance in Heinersdorf, though, is unusually strong. The Pankow-Heinersdorf Citizens' Interest Group -- with 70 members -- managed to gather 6,000 signatures between the spring of 2006 and last Friday, when their attempt to ban the mosque formally failed. Their objections included traffic chaos and falling property prices, but the longest paragraph in the petition expresses concern about "an Islamic-Ahmadiyya parallel society, which would have the goal of overturning our liberal-democratic order."

A threat to democracy?

Ahmadiyya has about 30,000 members in Germany. The group isn't considered a problem by the government. Erhart Körting, who as Berlin's Senator of the Interior has to worry about terrorism, says Ahmadiyya is a "rather orthodox club," but not a threat to the German constitution. Ahmadiyya rejects violence, and not even the Citizens' Interest Group perceive the group as a terrorist threat. 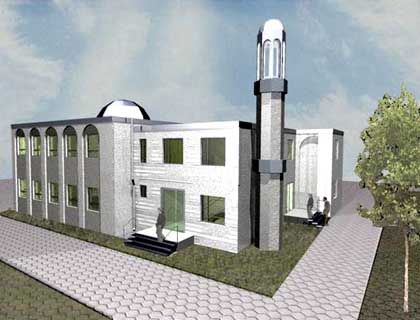 A computer drawing of the planned mosque in Heinersdorf. The building will go up on a vacant piece of land where a sauerkraut factory used to be.

"They're not armed, but they have to swear an oath to be missionaries," said Günter Bronner, the white-haired man at the vigil, growing overexcited. "We know about oaths of allegiance! We had those under Hitler!"

The imam of the 200-strong Ahmadiyya group in Berlin is a Pakistani-born man with German citizenship called Abdul Basit Tariq. He gives Friday prayers in German and spoke at Berlin's five-year commemoration of Sept. 11, 2001, at the invitation of William Timken, America's ambassador to Germany. He's heavy, tired-looking, and quite conservative. When his wife knocks to let him know about a call on his cell phone, he takes it from her hand, which pokes out from behind the frosted-glass kitchen door -- to keep a male interviewer in their home from laying eyes on her. He believes marriage is "God's will" and wants to protect his community from the easy morality of modern Europe as much as the Interest Group wants to keep Heinersdorf free of Ahmadiyya.

"We've tried to meet with representatives of the Ahmadiyya community," complains Swietlik. "But these meetings always bring up new questions."

He points out that 6,000 signatures on the petition represents a full 90 percent of Heinersdorf's 6,500 residents. "Which brings us to a point we just don't understand," he said. "Democracy is supposed to enforce the will of the people. That's the basic principle of democracy, right? And when 90 percent of the people in a district like Heinersdorf are against the building of a mosque, that's a pretty clear statement. We don't understand why politicians don't line up behind us."

Gabi Groth, a lean 49-year-old saleswoman with brown hair and wire-frame glasses who turned out for the candlelight vigil, added, "We Heinersdorfers are afraid that radicals from the right and left will come here and make an issue out of this mosque."

She may have been thinking of a meeting in March 2006, when Ahmadiyya held an information session in a Heinersdorf school gymnasium. Fifteen-hundred locals turned up, too many for everyone to find a seat -- which made the atmosphere tense even before the meeting was crashed by members of the German far right. Police broke things up before the information session could start and led Ahmadiyya representatives out under special protection. Someone hollered, "Wir sind das Volk!" ("We are the people") -- an anti-Communist phrase from the old East Germany -- and a lot of people in the gym took up the chant.

"We can do as many information sessions as we want," says Wagishauser, the German head of Ahmadiyya, with resignation. "I can't even remember how much we've explained and discussed in all the places where we've wanted to build mosques. In the end it's not much use. Communism used to be the great threat; now it's Islam. It's just the conflict of our time."