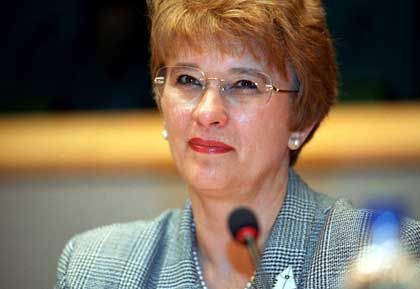 Ms. Kalniete, a number of potentially destabilizing developments in Central and Eastern Europe have flown under the radar recently in the shadow of the dramatic confrontation between the West and Islam. In Belarus, Europes last dictator Alexander Lukashenko will hold elections on March 19. Observers do not expect the vote to meet democratic standards and on Tuesday, Lukashenko warned of Western influence in the campaign. In Ukraine, the "Orange Revolution" seems to be unravelling and the elections on March 24 could bring the deposed Russophile President Viktor Yanukovych back to power. How should the Europeans react to these developments?

Kalniete: The European Union must assert its presence in the region more boldly. The opposition in countries like Belarus needs our encouragement. I remember how it was to live behind the Iron Curtain, how even small signs from the West were taken as real encouragement. That is why Latvia is working with opposition groups in Belarus and why the European Commission is financing radio show broadcast into Belarus ­-- 15 minutes daily, if I'm not mistaken.

SPIEGEL ONLINE: And that's it?

Kalniete: The EU has to do more for the process of democratization in these countries. We can help create those grassroots movements which one day can lead to normalization. If the democrats in these countries are left without oxygen, there will be no one who is capable of seizing the moment when it arrives. The Baltic states can play a special role in this -- we are neighbors, and we know what needs to be done to transform an egalitarian society to an open, democratic society.

SPIEGEL ONLINE: Until recently, Ukraine was seen as successful example of how the EU, together with the US, can encourage this process. But now the situation is rapidly deteriorating. How can this strategically important country be kept on a positive trajectory?

Kalniete: We shouldnt forget that without the work of Lithuanias President Valdas Adamkus and Aleksander Kwasniewski, then president of Poland, there probably would not be an active EU Ukrainian policy. Some European leaders were very concerned they might be doing something unacceptable to Moscow. They would have peferred a polite silence.

SPIEGEL ONLINE: But now the Russian influence seems to be increasing again.

Kalniete: My joy about the Orange Revolution was immediately followed by the thought: Now comes the most difficult bit. After a revolution, people always expect that all promises made will be immediately fulfilled. But in reality it takes years, and by then the electorate's patience is worn thin. And the Ukrainian economy is not healthy. Taken together this provides ample opportunity for neighboring countries to feed discontent.

SPIEGEL ONLINE: The EU once again ruled out full membership for Ukraine last week. What perspective can Europe offer?

Kalniete: First, it is for the government in Kiev to develop a perspective for their country. The particular difficulty of Ukraine is that the political elite does not share a common vision of the countrys future. There is a group within that elite which really wants Ukraine to join NATO and the EU, and which is prepared to take the tough decisions necessary. But they are not the majority. The impression is that the majority of the elite would like to have Ukraine to themselves, as their own fiefdom, to do whatever they want.

SPIEGEL ONLINE: Again, how can Europe help to make Ukraine safe for democracy?

Kalniete: The EU and Ukraine have entered into a Partnership and Cooperation Agreement which can be used as an efficient mechanism to bring Ukraine closer to the Union. But that said, given the dependence of Ukraine on Russia's energy resources, I don't see Moscows influence there waning. It is also a psychological problem for the Russians -- after all, ancient Russia had its historical roots in Kiev. Ukraine, in their view, is the Russian heartland. Remember, even the loss of the Baltic states was accepted only with great difficulty. In his recent press conference on the state of Russia, President Putin referred to Latvia's capital as "nasha Riga," our Riga. I believe it was not his intention, just a lapse. But it shows the profound psychological attachment among the Russian political elite to the Soviet empire of days past.

SPIEGEL ONLINE: A border dispute between Russia on the one hand and Estonia and Latvia on the other has been simmering for years. Only a few days ago, Putins assistant Viktor Ivanov  warned that "undermining the universally accepted results of World War II" was a "dangerous line" to take. How concerned are the Baltic states about such rhetoric?

Kalniete: Membership in NATO an the EU gives us all the security we need. There is no reason for the Baltic countries to feel threatened. Plus, Russia's rhetoric is not aimed at the outside world, it is intended for domestic comsumption. To call this issue a territorial dispute is a misinterpretation. Estonian and Latvian territory was transferred to Russia during the Soviet era when nobody thought that there would ever again be an independent Latvia and Estonia. After independence, both countries were prepared to sign border treaties with Russia. But Moscow withdrew because we made reference to the peace treaty which was signed between Russia and Latvia in the 1920s, which we consider the basis of our bilateral relationship. The treaty includes the definition of Latvias territory to which Russia had agreed. The same is true for Estonia.

SPIEGEL ONLINE: At a meeting in Vienna last Wednesday, Russia's Foreign Minister Sergei Lavrov responded to questions about the situation of Russian NGOs and about Chechnya by decrying the "outrageous situation" of ethnic Russians in Latvia and Estonia ...

Kalniete: One has to understand that Russia has always believed that the world is hostile towards it. The majority of Russians are deeply convinced that in history, they have always been the victims. This partly explains why Russian foreign policy almost mechanically tries to deflect accusations by making counter-accusations. Its the same technique the Soviets used. Putin is using it in his quest to regain something like the USSRs global role for Russia. Incidentally, that goal is also behind his recent invitation to Hamas.

SPIEGEL ONLINE: There is also considerable political instability in the EU's new Eastern European members. Poland has a minority government and is permanently on the brink of a government crisis; Lativia has had 12 governments in 13 years. Only last Thursday your political party "New Era" voted with the opposition on tax reform, prompting its three coalition partners to boycott cabinet meetings. Do weak governments reduce the influence the new EU member states play in Brussels?

Kalniete: I don't know Poland well enough to answer on their behalf. In Latvia we have had regular government crises since independence. But what is striking is that all of these governments have moved in the same direction - towards NATO and towards the EU. I always compare Latvia to Italy: Italy has also always had a high government turnover, but nonetheless it became one of the most developed countries in Europe. And in Latvia, all our other results are spectacular, GDP grew by more than 10 percent in 2004. So our market economy and our democratic reforms are really working. I don't foresee that the vote last Thursday will lead to a government collapse. If the government falls, all four of the current coalition parties would suffer.

SPIEGEL ONLINE: You were a member of the European Union constitutional convention and helped to draft the constitutional treaty, which was rejected in the French and Dutch referenda nine months ago. Can the project of a European constitution be salvaged?

Kalniete: I doubt it, and regret that the constitution became a victim of domestic problems in some European countries. It is a good document, it is the best document possible under the given circumstances. I don't believe that we can revive the constitiution as it is, after the French "non". What we can do is to put into force some parts of the constitution, namely those on which there is a consensus in the European Union. The EUs common foreign and security policy is the obvious example. All polls show that  Europeans are in favor of increasing Europe's role in the world.