For actor Ken Watanabe, going on location for the film "Letters From Iwo Jima" was a highly emotional experience. "When I saw the island for the first time from the plane cockpit, I couldn't stop crying," he says. 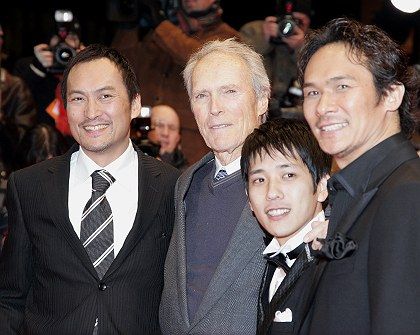 It's not surprising the island prompted such a strong reaction. Most of the 22,000 Japanese soldiers who took part in the Battle of Iwo Jima in early 1945 -- and were vastly outnumbered by the 100,000-strong American forces -- lost their lives. "It felt like time had stopped on the island after the war," says Watanabe, who says he felt the presence of the dead Japanese soldiers when he visited the island.

The 47-year-old Japanese actor, who is best known to Western audiences for his role alongside Tom Cruise in "The Last Samurai," played the Japanese commander, General Tadamichi Kuribayashi, in Clint Eastwood's Oscar-nominated movie. "Letters From Iwo Jima," which had its German premiere Sunday as part of the Berlin Film Festival, tells the story of the battle for the island from the Japanese perspective and forms a companion piece to Eastwood's 2006 film "Flags of Our Fathers," which gives the American point of view. Eastwood has said he wanted to make the second film so that both sides of the story could be told.

The film has sparked a debate in Japan about the battle and Japan's role in the war. "In Japan, almost nobody knew about this tragedy before the film," Watanabe says. "Sixty years after the war, most people want to learn about the true history of the past. It's good timing."

Tsuyoshi Ihara, who plays the role of the dapper cavalry officer Baron Takeichi Nishi in the film, agrees. "The film has become a trigger to raise interest in reassessing what the war is about," he says.

He says the film isn't just entertainment. "I hope it could be a means to change society," he says, pointing out that it has already been viewed by 4.5 million people, including several politicians, and has been touted as potential teaching material for schools. "Just the fact that we are looking at what happened 61 years ago is very important for Japan today."

The work also highlights changing attitudes to war in Japan. In the film, tensions arise between traditionally minded soldiers who adhere to the warrior code of bushido and want to commit suicide when they fail, and those soldiers who are more concerned about just staying alive. The latter are personified by the character of Saigo, a homesick and mutinous young recruit in the best war movie tradition of the anti-hero such as Yossarian in "Catch 22" or Hawkeye in "M*A*S*H." 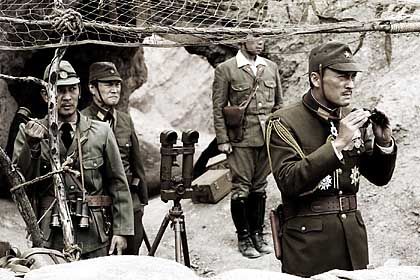 Watanabe did painstaking research into his character, General Tadamichi Kuribayashi.

"It's quite a new idea that people like this existed even at that time," says the 23-year-old actor Kazunari Ninomiya, who plays Saigo. "When I meet people from the older generation, who are in their 40s or 50s, they say to me: your role, he's such a coward. But when I talk to my generation, they are actually quite stunned because you don't learn about this in history books at school. They say they would have felt the same way." Ninmiya says he must be similar to his character in some ways -- he actually cast for another role but was spotted by Eastwood as perfect for Saigo -- and admits that he would "run away" too if he was in a war.

Watanabe too feels Japanese culture has radically changed since the war. "I discussed this with young Japanese actors and they could not understand the attitude," he says. "I find it hard too. They had a really strange and crazy education, like some kind of religion, in this era."

Interestingly, both Kuribayashi and Nihiri had spent time in the United States -- Kuribayashi had been a military attaché in Washington D.C. while Nishi had won gold in the equestrian event at the 1932 Los Angeles Olympics. The film suggests that both felt sympathy towards the American "enemy." For Ihara, one of the film's key scenes is the one in which Nishi reads out a letter a dead American prisoner had received from his mother.

As part of his research, Ihara met the 83-year-old son of Nishi and studied the letters the Baron sent home to his family. "What struck me was that the content of the letters was very mundane, like a daily journal summary of what had happened," he says. "As a reader you wouldn't think he was on the battlefield."

Watanabe too went to great lengths researching his character -- he says he felt under enormous pressure playing a historical figure. "As a Japanese actor, I had to make this film really accurate from the Japanese point of view," he says, then adds with a laugh, "If I didn't make this film correctly, I couldn't go back to Japan."

As part of his research he even visited Nagano prefecture where the general had grown up -- and which is the neighboring prefecture to where Watanabe himself is from -- in an effort to really understand the general. Watanabe took water from the general's home region and sprayed it in the cave on Iwo Jima where Kuribayashi had had his headquarters, as a form of blessing. "It evaporated straight away," he says. "It was like he was telling me 'thank you.'"

And what was it like working with Clint Eastwood, a hero of Western cinema? "Every director is different, but Clint is really special," says Watanabe. "We had no rehearsals and did everything in just one take. Sometimes I missed a line and I wanted to take it again, but he said no, it doesnt matter -- in normal life people make mistakes too."

Ihara liked the American director's style, "because all your energy is concentrated in just one take. At first I felt very nervous but excited, but after shooting I thought that was the best direction."

Ninomiya, who is better known in Japan as a member of the boy group Arashi and admits he's only seen "about 20 movies" in his life -- wasn't intimidated by the Hollywood legend: He hadn't even heard of Clint Eastwood when he auditioned. "I only went so I could impress my friends by telling them I'd met Eastwood," he says.