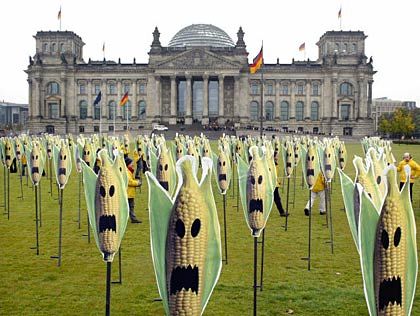 A horrifying prospect for most Germans: gene manipulated food.

Want to horrify a German? Here's how: Just tell him that you find genetically modified Frankenfood far superior to naturally grown fruits and vegetables. It's that easy. But make sure you have the defibrillator handy.

Fully 70 percent of Germans say they would never touch gene-manipulated food. Indeed, many of them go to great lengths to avoid any food manipulation at all -- and compensate by heading straight for the organic food store. Germany is one of the most organic food-obsessed places on the face of Mother Earth. Whereas Americans or Brits can often only get their organic fix in health food stores or pricy, upscale markets, organic food shops in Germany are multiplying faster than genetically modified corn in Iowa. From asparagus to zucchini -- and including gummy bears -- organic groceries are a booming business.

Part of this stems from a simple reality: Germans spend a lot of time thinking about the environment and their health. Such eco-centrism becomes evident in shopping habits as well. Plus, supermarket vegetables here tend only to come in three varieties: bruised and battered after long journeys from southern Europe or northern Africa; old and moldy after a few days too many on display; or perfectly tasteless after a childhood in a Dutch greenhouse. Indeed, the flatlanders next door famously call their home grown tomatoes "water sacks," and they're more than happy to scam their neighbors rather than to actually have to eat them. It's not difficult to see why organic shops are the northern European equivalent of a desert oasis, with fresh greens and fruits that actually taste like they're supposed to and are not wearing an unseasonable thick fuzzy mold jacket.

All of which means that organic foods in Germany are no longer associated exclusively with Birkenstock-wearing hippies or overly protective mothers. Organic has gone mainstream. Of course, mom and pop health food shops still exist -- peddling such things as organic Yogi tea and organic massage salts along with fruits and veggies -- but there are also more than 300 supermarkets across the country devoted exclusively to trade in pesticide, antibiotic and hormone-free fruits, vegetables, cereals, meats and just about everything else imaginable. And it doesn't have to be expensive. Discounters like Lidl and Aldi all have their own inexpensive "bio-label" products.

The result of the obsession, not surprisingly, has been a rapidly evolving farming industry. Some 4.5 percent of all German farms forego the use of chemicals and organic agriculture now employs some 150,000 folks. Whereas €1.48 billion worth of eco-food was sold in 1997, in 2004 it had risen to €3.5 billion. Close to one-third of all organic food sold in the European Union makes its way through check-out stands in German markets. Already more than 30,000 products in Germany carry the official government organic seal of approval.

So will Germans soon turn their backs on the thick-skinned, tasteless Dutch "water-sack"? Not likely. Organic farms are already having difficulty keeping up with the demand, and should a big supermarket chain place a large order, a shortage often takes hold elsewhere. One gets the impression though, that instead of compromising and purchasing "normal" produce should their favorite chemical free carrot juice be sold out, most militant eco-Germans would rather go without. But at least they'll be healthy.