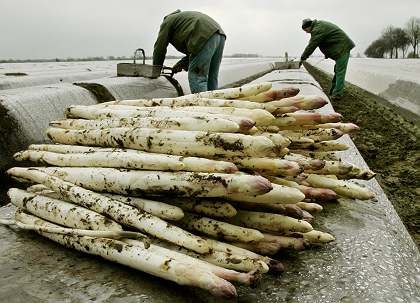 Asparagus season is a national obsession in Germany.

A colleague recently walked into my office and proudly announced that everyone who had helped him move would soon be invited to his new flat to feast on asparagus. To anyone who hasnt spent much time in Germany, offering thanks with a bland, colorless vegetable may seem a bit cheap, offensive even. For many a German, however, white asparagus, often referred to as "edible ivory" or "the king of all vegetables," is considered an appropriate reward for helping a friend haul a piano up five flights of steps. The season starts around mid-April each year, and its celebrated with incomparable fervor. Which brings me to an anecdote.

Northern Germans are generally a reserved folk; there arent many things that they get visibly excited about. I lived in Hamburg for four years and rarely witnessed a wild, enthusiastic howl or a genuine public belly laugh. While I was teaching English there, I had a student named Evelyn in a one-on-one conversation class who had no interests. No, hobbies, no friends ("friends are for wimps," she often quipped), very little interest in current affairs or anything that could sustain 90 minutes of small talk. Getting her to speak at all was next to impossible. I tried everything to no avail, and ended up engaging in nervous, repetitive monologues about Canada to survive the two hours we were forced to spend together each week.

This went on for about six months, and then April arrived. Asparagus season began, I asked the right question (Something as desperate as, "So tell me Evelyn, whats your favorite vegetable?"), and suddenly the floodgates of conversation burst open. Evelyn was a woman transformed. Her otherwise sullen eyes sparkled as she described a farm just south of Hamburg where one could buy what she considered to be the best asparagus in the land. For four consecutive weeks, she told stories of asparagus seasons past and reminisced about the cream of asparagus only her mother could make, the recipe for which she had regrettably taken to the grave.

And then the season ended, and Evelyns newfound conversational skills disappeared as quickly as they had emerged. I never got two consecutive sentences out of her again.

While I certainly was grateful for Evelyns asparagus-induced awakening, the novelty of daily conversations about the stringy vegetable has worn off in the seven asparagus seasons I've since experienced. For two months each year, Germanys nationwide celebration of asparagus means that the vegetable is prominently featured on menus everywhere, from the finest restaurants to company cafeterias. There is no escaping asparagus and asparagus lovers, who deem it appropriate to make "edible ivory" the subject of every lunchtime conversation. Disliking the vegetable is not an option, and openly criticizing its lack of flavor and listless appearance, Ive learned, is akin to a national insult. Tables full of people have fallen silent when Ive referred to asparagus dishes as "tree bark in creamy white sauce". On several occasions, Ive been labeled a culinary philistine, and German friends have shamelessly bullied me into ordering asparagus because, they claimed, I just hadnt tasted the right dish yet.

The only way to avoid making enemies during asparagus season, Ive found, is to grin, agree that its delightful, and inconspicuously hide the soggy white sticks under my napkin.

Contributed by Valérie Callaghan in Munich.