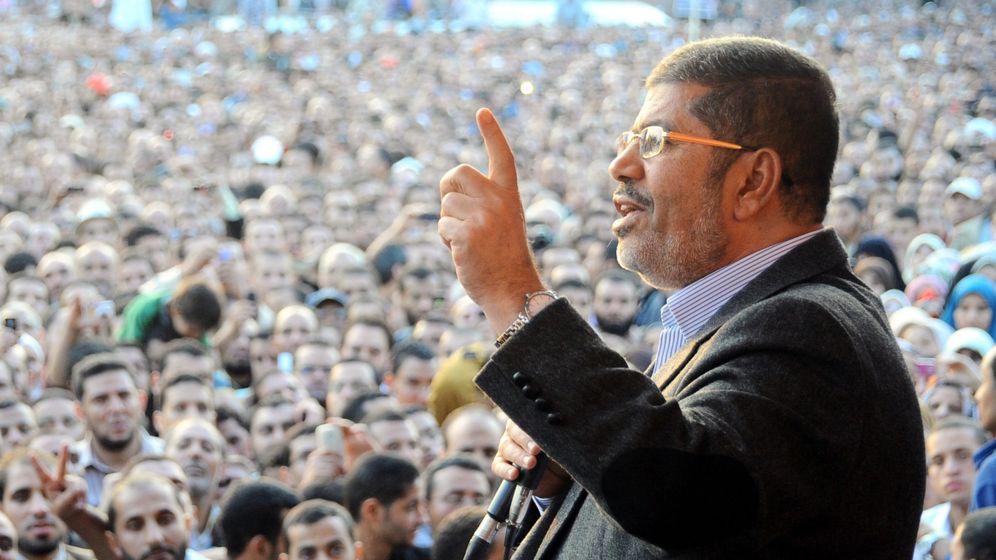 Mohammed Morsi can be very sympathetic, even toward Jews, as evidenced by an extremely friendly letter the Egyptian president sent to Israel last October. The president had personally written the letter of accreditation, for his new ambassador in Tel Aviv, to his counterpart Shimon Peres, whom he addressed as a "Dear Friend." In the letter, Morsi clearly invoked the "good relations" that "fortunately exist between our countries," and pledged to "preserve and strengthen" them.

The government in Jerusalem had not expected such warm words from a president who had emerged from the Muslim Brotherhood. Unsure whether they were perhaps the victims of a forgery, the Israelis published the letter. But Cairo confirmed that it was indeed genuine, and Jerusalem reacted with relief. The Jewish state had lost a reliable partner with the ouster of Morsi's predecessor Hosni Mubarak, and now there was hope that perhaps Morsi would not confirm all of Israel's fears.

But the Egyptian president, who is visiting Berlin this week and will meet with Chancellor Angela Merkel, a champion of Israel, appears to be a man with two faces. He is conciliatory as Egypt's leader, saying that he wants to be the "president of all Egyptians," even though only about a quarter of the country's 50 million eligible voters voted for him. And, of course, he insists that his country will fulfill all of its obligations from the Mubarak era, including both the peace treaty with Israel and a policy of close cooperation with the United States.

In mid-January, however, Western diplomats and politicians saw a very different Mohammed Morsi, a man filled with hate for the "Zionist entity," the term Islamists use for the Jewish state. An almost three-year-old video, published by the Washington-based Middle East Media Research Institute (MEMRI), depicts an Islamist who is practically foaming at the mouth, as he rants about the Israelis in an interview with an Arab network. Speaking in a deep and firm voice, he calls them "bloodsuckers" and "warmongers," and says that there can be no peace with these "descendants of apes and pigs."

It was apparently more than just a regrettable moment of madness for Morsi, claims a prominent former member of the Muslim Brotherhood. After all, he says, the current president served as general inspector of the Muslim Brotherhood for years, which put him in charge of the group's online service. That service includes quotes about Israelis and Jews that testify to the same hatred as the lapses in the video.

Despite outrage internationally and at the White House over the video, Morsi was unperturbed by the furor over his remarks. In the end, his spokesman said that Morsi's words had been taken out of context, but offered no further explanation or apology. When SPIEGEL reporters appeared at the presidential palace in the Cairo suburb of Heliopolis last week after having received approval for an interview with Morsi, they were turned away.

To comprehend the Egyptian president and grasp how the Muslim Brotherhood shapes its members, it helps to speak with men who knew Morsi during his time with the Islamist organization -- and who also have the courage to speak openly about the group. Abdel-Jalil el-Sharnoubi, 38, talks about how dangerous this can be. Last October, after he had spoken about quitting the Brotherhood to Egyptian newspapers and in TV appearances, masked men opened fire on Sharnoubi's car with submachine guns.

For Sharnoubi, a lanky man, keeping a constant eye out for suspicious characters has become second nature. He takes a cautious look around as he walks into the Café Riche in downtown Cairo, and when he sits down, he makes sure that he has a good view of the entire establishment. He orders tea, rolls himself a cigarette and then tells the story of his time with the Muslim Brotherhood and the current president, to whom he derisively refers as "doctor."

When they first met in 2000, both men were already successful. Sharnoubi, the son of an imam in the Nile delta, joined the Brotherhood at 13. He eventually advanced within the regimented organization to become a member of its information committee. Morsi, for his part, had made it into the Egyptian parliament. Because members of the Muslim Brotherhood were not allowed to run for political office under Mubarak, Morsi masqueraded as an "independent." The two men had had "a lot of contact with each other" to further their goal of spreading the Brotherhood's message as widely as possible, says Sharnoubi.

It seemed "inconceivable" to Sharnoubi that Morsi's group would one day assume power in Egypt. In fact, he says, he would have "found it even less likely" that Morsi, a modest member of parliament, would become president. Even in the highest government position, Morsi cannot have shed the Brotherhood's mission like an old suit, says Sharnoubi. "A man like Morsi, with such deep convictions, can't do that. If we hear anything else from him, it'll be a pretense." He explains that Morsi owes his survival under autocrat Mubarak to this "talent for assimilation," and that he is a "master of disguise."

'Any Cooperation with Israel is a Serious Sin'

There is too much at stake now, says Sharnoubi. There are the aid payments from Europe and the United States, which Egypt's ailing economy urgently needs. And Morsi himself also needs the West's goodwill. If there is a "power struggle with democratically minded forces," he says, the president will depend on intercession from Washington, Brussels and Berlin.

Sharnoubi wasn't surprised by the Morsi hate video. "Agitation against the Israelis is in keeping with the way Morsi thinks. For the Morsi I know, any cooperation with Israel is a serious sin, a crime." Morsi's choice of words is also nothing new, says Sharnoubi. As proof, he opens his black laptop and shows us evidence of the former Muslim Brotherhood member's true sentiments.

Indeed, the video gaffes do not appear to be a one-time occurrence. In 2004 Morsi, then a member of the Egyptian parliament, allegedly raged against the "descendants of apes and pigs," saying that there could be "no peace" with them. The remarks were made at a time when Israeli soldiers had accidentally shot and killed three Egyptian police officers. The source of the quote can hardly be suspected of incorrectly quoting fellow Brotherhood members: Ichwan Online, the Islamist organization's website.

Few people are as familiar with the contents of that website as Sharnoubi, who was the its editor-in-chief until 2011. The current president became the general inspector of the organization in 2007, says Sharnoubi. In this capacity, Morsi would have been partly responsible for the anti-Jewish propaganda on the website, which featured the "banner of jihad" at the time and saw "Jews and Zionists as archenemies." The threats are attributed to the undisputed leader of the Brotherhood, Mohammed Badi. According to the website, Badi's creed is: "Resistance is the only solution against Zionist-American arrogance and tyranny."

It was under the editorship of Sharnoubi, who stresses that he condemns the "Israeli government's settlement policy," that Morsi gave a self-promoting interview in May 2009. Referring to the Israelis, the current president said: "They all have the same nature. They are equally shaped by shrewdness, deception and hate." He added that their only objectives are "killing, aggression and subjugation."

Former fellow Muslim Brotherhood member Sharnoubi expects "no words of regret, at least not sincere ones," for his offensive remarks in the scandalous film. Anti-Israeli rhetoric, he says, is a "cornerstone of the Brotherhood's ideology."

Sharnoubi assumes that cordial moves like the letter to Peres have only one goal: "To secure and expand the dominance of the Brotherhood." Only recently, the president issued a decree that gave him absolute powers, and Morsi currently controls all three branches of government. "He has secured more power than his predecessor Mubarak ever had."

Sharnoubi's vision of a future Egypt under the Muslim Brotherhood is horrifying. "They will infiltrate all areas of our society: government offices and ministries, schools and universities, as well as the police and the military. They will eliminate their enemies."

"Not in the least," says Sharnoubi, noting that the Brotherhood is already infiltrating the security apparatus. "The Brotherhood will never give up its power without a fight."

When he leaves the café, Sharnoubi looks toward Tahrir Square, where there is no end to the turmoil. Last Friday, once again, there was rioting and there were clashes between Morsi opponents and the police, and some were killed or injured. For Sharnoubi, this is "merely a small foretaste of an imminent popular uprising."