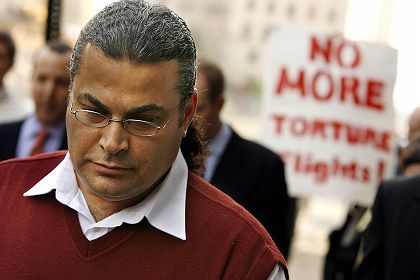 German citizen Khaled el-Masri claims he was abducted by the CIA. Now 13 arrest warrants have been issued in connection with the case.

Munich-based Bavarian senior state public prosecutor Christian Schmidt-Sommerfeld said in a statement Wednesday that the warrants had been issued in the last few days. He said the agents are being sought on suspicion of abducting and wrongfully imprisoning el-Masri as well as causing him grievous bodily harm. El-Masri was allegedly abducted in a case of the controversial CIA practice known as "extraordinary rendition," which involves kidnapping terrorist suspects and flying them to third countries to be interrogated.

The prosecutor's office refused to reveal the names of the people sought. However Schmidt-Sommerfeld said in a statement that "the personal details contained in the arrest warrants are, according to our current knowledge, aliases of CIA agents." He added that, "further investigation will, among other things, concentrate on trying to determine the clear identities of the suspects." Prosecutors did not state the nationalities of the suspects. However, according to German media reports, most of the suspects are resident in the US.

El-Masri's lawyer Manfred Gnjidic told SPIEGEL ONLINE that his client was "very happy" about the new development. "The arrest warrants have a very special meaning for him," he said. The warrants show that el-Masri has "the full support of the German justice system, because he told the truth." The arrest warrants are also a symbol that "the CIA in no way operate in a lawless space and that Germany will not tolerate the measures of the agents and their bosses," Gnjidic said.

The German prosecutors received the names of the suspects from a Spanish journalist who had sources within Spain's Civil Guard police force, Schmidt-Sommerfeld said. They were also assisted by the Milan prosecutor's office and Swiss senator Dick Marty who led a recent inquiry into CIA renditions for the Council of Europe. Italy has also issued arrest warrants for suspected CIA agents in a separate renditions case.

Munich prosecutor August Stern said the CIA agents are suspected of flying in January 2004 on board a Boeing 737 from the Spanish island of Mallorca to pick up el-Masri after he was held by Macedonian authorities. The suspects are "people who in part were part of the plane's crew, and in part, those who were part of the so-called rendition team -- that is, the kidnapping team," Stern told Reuters Television.

Both the German government and the CIA declined to comment on the arrest warrants Wednesday.

The German television station NDR released a list of the names of the supects which it claimed its reporters had obtained. The names, which were of 11 men and two women, included the suspected pseudonyms Kirk James Bird and Hector Lorenzo. The station claimed it had contacted three of the suspects but they had refused to comment. They managed to trace one of the men, who has the pseudonym Eric Fain, because he had made a phone call home from Mallorca.

The Los Angeles Times reported in its Wednesday edition that the arrest warrants are for 13 US intelligence operatives, including four pilots, a medic and members of an operations unit.

Lebanese-born German citizen Khaled el-Masri claims he was abducted in Macedonia at the end of 2003. After being handed over to the CIA and flown to Afghanistan, he claims to have been tortured and accused of collusion with the Sept. 11 hijackers. He says he was held for four months before being released without any charges on a roadside in Albania.

The case has strained US-German relations. However it is believed to be unlikely that the US would hand over suspects to be tried in Germany, as German arrest warrants are not valid in the US. Without the real names of the suspects, the warrants are in any case largely symbolic, commentators pointed out.

With reporting by Matthias Gebauer.