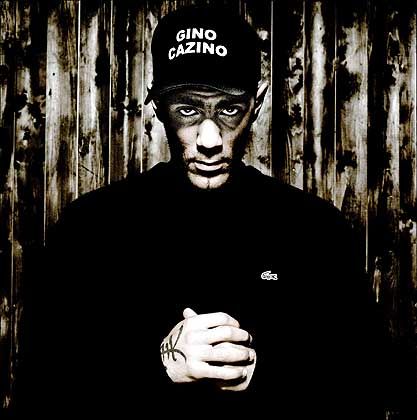 Bushido is topping the German charts with his gangsta rhymes.

Germany's most controversial rapper has five tattoos, stomach-churning lyrics, impressive record sales and, somewhat improbably, admirers among both immigrants and the neo-Nazi skinheads who rail against them. He is also exceedingly polite and quick to refill a guest's glass of water, and he occasionally goes grocery shopping for his mom, with whom he shared an apartment until three months ago.

"In reality I'm a relaxed guy who likes to chill, who's funny and who's seen some stuff," said Bushido, 26, the son a German woman and a Tunisian man, whose real name is Anis Ferchichi. "But these people make me out to be the Devil."

In the past half year, Bushido and other gangsta rappers, largely from Germany's immigrant communities, have landed on a media watch list normally populated by right-wing neo-Nazi bands. They have attracted the wrath of politicians along with a following of hundreds of thousands of German youths mesmerized by their rhymes about dangerous neighborhoods, stab wounds and groupie sex.

A good 15 years after the music genre spread from the streets of American cities to tough neighborhoods from Rio de Janeiro to Marseilles, gangsta rap has hit it big in Germany, where tamer rap has been popular for years.

Riding on the coattails of American rappers like 50 Cent and Eminem, German gangsta rappers have made a strong showing on the charts -- where Bushido's last two albums have made their debuts in the Top 6 -- and shaken a society not used to hearing ghetto tales of death and revenge in its own language.

German parents and the news media have expressed shock at hardcore lyrics, which, they say, glorify a dangerous American ghetto fantasy that doesn't exist in Germany and shouldn't be encouraged.

In response, the Federal Department for Media Harmful to Young Persons, an agency set up in 1954 in the sensitive era of post-Nazi reconstruction, has expanded its mandate to rap after spending most of the past two decades monitoring neo-Nazi music. Four rap titles have been added in the last year, joining seven others recently added to the more than 450 songs or albums the department has put on its list since the 1980's. Inclusion is more serious than an explicit lyrics sticker on a CD cover. It means that the offending album can't be advertised and stores can't sell it to anyone younger than 18.

"We put them on the list for many different reasons, but mainly because they discriminate against women, who are typically labeled prostitutes and hookers, and they advocate violence," said Elke Monssen-Engberding, director of the department.

The list features songs by radical right-wing bands like Aryan Duo and Reichsfront, offering song titles like "White and Full of Hate" and lyrics that glorify violence against immigrants. The fact that such bands are increasingly sharing space with people they spent most of their time railing against might seem strange. But to Ms. Monssen-Engberding, the threat from the two seemingly disparate groups is similar.

"The right-wing musicians are promoting an ideology, the rappers aren't promoting ideology; it's a type of dialogue," she said. "But it doesn't make it less dangerous."

In fact, there is some evidence that neo-Nazis relish the aggressive lyrics and image promoted by Berlin's gangsta rappers. Hannes Loh, an author of the book "Fear of a Kanak Planet: Hip-Hop Between World Culture and Nazi Rap," said some right-wing skinheads are abandoning jackboots and bomber jackets for the baggy pants and sneakers of the rap scene.

"We don't want to overexaggerate but it has become clear that it is moving in that direction," Mr. Loh said. "It's very contradictory, and very hard to understand."

Including for the rappers themselves. Bushido says skinheads cheered him at a concert he recently gave in the East German city of Chemnitz. After the show, they came up to congratulate him and ask for autographs.

"There is no trying to understand Nazis, but what are you going to do?" he said. "Are you going to ban them, put them in jail so that they hate you even more? If that guy is cool with me during the hour in which I'm giving my concert and respects the other people, then I think I've done a good job."

His 2001 album "King of Kingz," which he produced in his mother's apartment, was put on the list in May. His most recent releases, "Electro Ghetto" and "Vom Bordstein bis zur Skyline" ("From the Pavement to the Skyline"), are also slated for listing.

But that hasn't hurt Bushido's popularity among young people. "Electro Ghetto" made its debut at No. 6 last year on the German charts and is set to cross the 100,000 sales barrier needed in Germany to be certified gold. His most recent album made its first chart appearance at No. 3 and has already sold more than 50,000 copies, according to his agents at Universal Music.

Kaan Mueller, 16, who was attending a recent rap and dance open mike night at a community center in Kreuzberg, said he liked the music "because, sometimes, you need something aggressive and hard like that just to let out your feelings."

Around him, a multicultural mix of teenagers were cheering and whooping as group after group got onstage, some mimicking poses of their gangsta rap heroes as they rhymed unintelligible lyrics over a bad sound system. There were plenty of jerseys and baseball caps worn off center in imitation of American rap stars.

"I listen because I understand German hip-hop far better," said Mr. Mueller, a baseball cap tipped upwards from a face splashed with acne. "The Americans might do it better, but I don't know what they're saying."

The genre, though, is more popular with males than females. Monika Hetzer, 19, who helped organize the open mike night, said the new rappers were bad news. "I think it's good that they put them on the list," she said. "I just got called a slut on my way in here by a little boy. Kids have gotten more and more aggressive. It's no surprise, given what you hear on the radio."

German rap has traditionally ceded ground to imports from across the Atlantic. Though some German hip-hop groups found success in the 1990's, German, unlike French and English, is not a language that accommodates the genre, say some artists.

The language features many combination words with an avalanche of syllables that don't rhyme well together, Bushido said. That impairs a rapper's ability to let loose a smooth and creative flow. That, combined with inferior production quality and beats, kept young people listening to rap imports, said Eric Remberg, the head of label Aggro Berlin, who prefers to go by the monicker Specter. German rap's newfound success is partly a result of improved production quality and better lyrics, and partly a realization that Germany has its own problem neighborhoods, where failed integration and social hardship are part of the daily struggle, Specter said.

"I think Germany has reached the point that rap once was in the U.S.A., where it was attacked because people couldn't believe something like the gangsta life existed," said Specter, who since founding the label in the basement of a former brothel in 2001 has built it into one of the country's most notorious. "It was just ignored. People said. 'These conditions don't exist in our country.'"

Though Berlin might not have a Bedford-Stuyvesant or a South Central, he said, it has enough tough neighborhoods to provide material to the social misfits and immigrants who gathered in dark Berlin basements for freestyle battles in the late 1990's. A scene that started in the immigrant community in the 1980's quickly grew to include German youths from tough neighborhoods and children of mixed parentage.

Now that the songs they initially wrote to provoke their peers are reaching a larger audience and reaping criticism, rappers like Bushido are starting to tweak their style and tone it down. The new album he is recording in Austria is much more introspective, he said. In one song he portrays himself as an angel watching over a girl who has abusive parents. In another, he regrets missed chances with a girlfriend who has had an accident. But other songs revert to the genre's typical form, with women getting much worse.