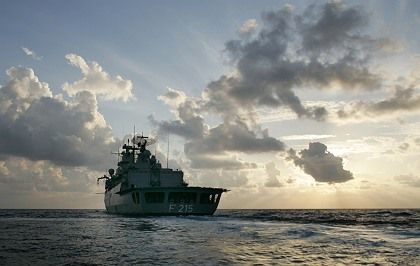 A German navy ship patrols off the coast of Lebanon.

The German embassy in Beirut is concerned that German citizens and installations in Lebanon could be in danger as a result of the German navy's participation in peacekeeping operations there, according to a report in DER SPIEGEL.

According to an internal memo circulated inside the embassy, Berlin's participation in the United Nations mission in Lebanon has "led to a changed and potentially violent attitude toward Germany and toward Germans in Lebanon among some radical Lebanese circles." The memo went on to say that, "It cannot be ruled out that isolated hostile, or even violent, acts against Germans in Lebanon" may occur.

Officials are concerned that German facilities in Lebanon, including even the embassy itself, may be at risk. All Germans were urged to exercise caution and not to travel unless absolutely necessary.

Despite Berlin's involvement in NATO operations in Afghanistan as well as missions in the Middle East, the country has so far avoided being hit by major terror attacks. Last summer, two Lebanese radicals placed suitcase bombs on German trains, but the attack was narrowly averted when the devices failed to explode.

The German navy is patrolling the coast off Lebanon to prevent arms from being smuggled to the radical group Hezbollah. The UN has been undertaking stepped-up peacekeeping operations there since the war between Israel and Hezbollah in southern Lebanon in the summer of 2006.