Tension between formerly close allies Belarus and Russia continue to grow as a dispute over energy escalates. In the latest move in the tit-for-tat struggle, Belarus has slapped a new tax on Russian oil. 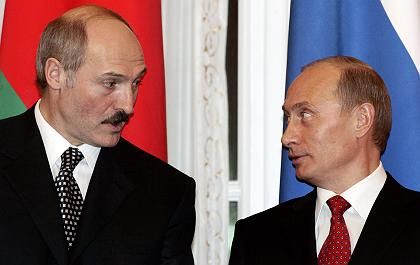 Belarus has imposed a new tax on Russian oil in the latest move in an energy dispute between the two countries. In this January 2006 file photo, Belarus President Alexander Lukashenko speaks with his Russian counterpart Vladimir Putin in St. Petersburg.

Belarus President Alexander Lukashenko on Wednesday imposed transit duty of $45 (€34) per ton on Russian oil, effective retroactively on Jan. 1 -- the day Moscow raised prices of natural gas for Belarus. Belarus had until now charged only a shipping fee on Russian oil pumped across its territory.

"If they are drowning in petrodollars and other currency income and have decided ... to place us in conditions worse even than Germany and other European countries, then let's ask this rich Russia to pay us for our services," said Lukashenko in televised remarks during a government meeting Wednesday. Reporters said the Belarus leader -- described by Washington as Europe's last dictator -- was agitated and shouted at times.

It is the latest development in an increasingly bitter energy dispute between Belarus and Russia. The Belarus government was forced on Jan. 1 to agree to pay twice the previous level for natural gas it imports from Russia. Moscow had threatened to cut gas deliveries to Belarus on New Year's Day, in a move reminiscent of its stopping supplies to Ukraine one year ago.

In the end, however, Minsk averted disruptions by agreeing to pay $100 per 1,000 cubic meters of gas. The new rate is still far below the price of $290 typically paid in western Europe.

Moscow has also imposed full duties on exports of Russian crude oil to Belarus (as opposed to through Belarus) -- another move that angers Lukashenko. Until now, this fuel has been shipped duty-free to refineries in Belarus. It was then re-exported as refined oil to other countries in a tax loophole which has yielded major profits for the Belarus government.

Lukashenko said the new Russian duties would bring the oil price to levels that would put "millions of people in Belarus" out of work.

Officials in Moscow have demanded clarification from Belarus about the new transit duty on Russian oil. "Questions arise as to the substance of the measures, which was not explained by the Belarussian side," Kremlin deputy spokesman Dmitry Peskov said. "There are also some questions about how it could be imposed on Jan. 3, effective from Jan. 1. We need additional details to analyze this decision."

Sergei Grigoriyev, vice-president of Russia's oil pipeline monopoly Transneft, told Reuters he did not understand how Belarus could impose the duty on Russian oil. He said if there was to be a charge it should be negotiated by the two countries' economy ministers.

Analysts said the transit duty would not affect world oil prices or cause shortages. However, it could cause short-term disruption to the supply chain as refiners in Poland and Germany look for cheaper alternative supplies of oil.

"I do not exclude (that) the Belarussians could do something weird, which may paralyze Russian oil exports to Europe," one trader with a major Russian oil firm told Reuters.

According to government figures, nearly 79 million tons of Russian oil was transported through Belarus' pipelines last year, destined for the European Union, Ukraine and the Baltic states.

Moscow says its ex-Soviet neighbors should be weaned off subsidies and start paying market prices for energy.

Some in Minsk see that policy as a betrayal of the special relationship between Moscow and Belarus. Ties between the two former Soviet republics go back centuries and remained very close after the 1991 Soviet collapse, but have frayed in recent years.

Recent developments suggest the Kremlin is growing tired of supporting Lukashenko, who has resisted efforts to grant Russia more control over Belarus and its economy.