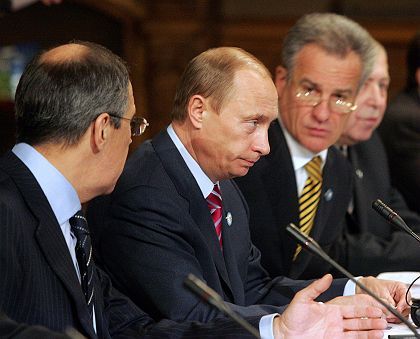 Russian President Vladimir Putin is in Helsinki for a summit with the European Union.

The meeting in Helsinki, Finland between European Union leaders and Russian President Vladimir Putin is going ahead as planned on Friday. But the summit will have none of the results the two sides had been hoping for.

Poland on Thursday made good on its threat to veto a mandate for the EU to negotiate a new partnership deal with Russia to replace the current agreement. The summit aimed to focus on the EU's energy partnership with Russia and on Russia's ongoing reluctance to allow foreign firms to invest in its oil and gas industry. The agenda is still full after the Poland veto, but little of substance is now likely to come out of the Helsinki meeting.

The Poles beef with the Russians has to do with Moscow's refusal to allow the import of Polish meat and other food products. Putin claims that the ban has to do with quality issues -- and with the ease with which questionable products can cross the border into Russia. At a news conference ahead of the summit, Putin affirmed his country's position by saying, "Poland must not protect the interests of swindlers and crooks involved in smuggling which hits local producers."

Warsaw, though, is convinced that the ban is more punitive in nature. Poland's westward political course following the collapse of communism raised hackles in neighboring Russia -- and Warsaw's energetic support for Ukraine's Viktor Yushchenko during his 2004 political battle against pro-Russian Viktor Yanukovych worsened the relationship even further.

Indeed, Poland had been hoping for EU support in its efforts to get the ban lifted. Instead, its insistence on vetoing the mandate has earned the country criticism. "The solidarity that Poland demands from its partners will rather be weakened (by the veto)," Joachim Wuermeling, a senior German official with the economy ministry, told the German economic daily Handelsblatt. "If the EU doesnt speak with one voice to its suppliers, it will lose out in the worldwide competition for resources."

Most, though, have been playing down the veto saying that it will have little effect on the meeting and that talks on trade, energy and human rights would go ahead. Putin also stands to face tough questions regarding a possible Russian role in the death of Alexander Litvinenko, the former Soviet spy who succumbed to a mysterious poison Thursday night in London.

Poland has also been trying to strike a more conciliatory note as the meeting begins. Andrzej Krawczyk, a former policy advisor to Polish President Lech Kaczynski, told Polish radio on Friday that Warsaw may withdraw the veto within days. "I will not hide that our scenario until yesterday was to strike a deal before the summit and we are also disappointed that it did not happen," he said, according to AP. "But there is nothing dramatic in it ... I believe we will come to an agreement a few days from now. There is willingness on the Polish side to do so."

Putin also emphasized that "the past must not be allowed to separate us," and he expressed his hope that despite the veto, the Helsinki meeting would lay the groundwork for a close cooperation between Moscow and the EU.