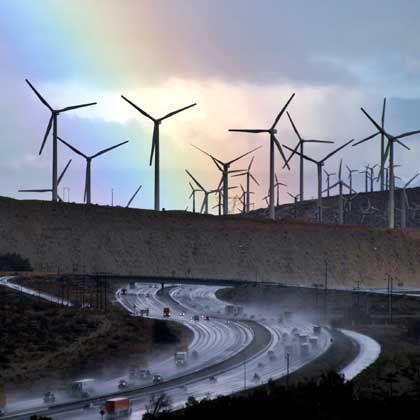 EU leaders are enjoying the calm after the storm of the summit. But will there be a pot of ecologically-friendly gold at the end of the resolution rainbow?

"Ambitious." "Credible." "Qualitative difference." German Chancellor Angela Merkel was full of praise on Friday for the climate change agreement reached at the European Union spring summit. She said she is personally "very satisfied" -- even "happy" -- about the compromise.

European Commission President Jose Manuel Barroso went even further in extolling the deal. He spoke of an "historic result" at the press conference called to announce that Europe's 27 member states had reached consensus. "We can say to the rest of the world, Europe is taking the lead," he said. "You should join us in fighting climate change."

It wasn't just the deal itself that was praised either. Merkel herself became the object of admiration for her hard work in bringing seemingly irreconcilable positions together. French President Jacques Chirac gushed, "Ms. Merkel worked with intelligence and elegance." In an interview with SPIEGEL ONLINE, Danish Prime Minister Anders Fogh Rasmussen said that "Ms. Merkel is doing an excellent job. She has a firm grasp on the details."

At first glance, Merkel -- currently occupying the EU's rotating presidency -- and Barroso have a lot to celebrate. Everything they wanted to get passed got approved -- and even quicker than the day's agenda called for. For the first time in its history, the European Union has a comprehensive agreement on its climate and energy policy:

Merkel is therefore not wrong when she talks of a "qualitative breakthrough" and a "new dimension of European cooperation." Barroso rightly points out that this is the most ambitious climate protection program in the world.

But the problems only really begin now. The Council has only formulated an abstract goal. The real struggle is reserved for the EU Commission, which now has to negotiate with each individual member state over its emissions and its energy mix. At the summit, Merkel has already had a foretaste of just how much each country defends its own interests, whether that is cheap coal (in the case of Poland) or nuclear power (in the case of France).

The decision over renewable energy in particular led to heated discussions which could only be defused on Friday morning. France joined together with several Eastern European countries to create a front against the plan proposed by Germany, the UK, Italy and the Scandinavian countries to set a binding target. 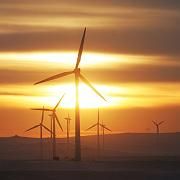 Wind power is likely to play an ever greater role in Europe.

Hence the only thing which is now set down on paper is the number 20, and no country names -- in other words, nothing about who is making which sacrifices. But this last point could not have been expected at the summit. Merkel said that she had "no reason to assume that anyone wants to escape."

But she admitted that the "hard negotiations" were still to come. The Commission now has a difficult task, she said, but one which is also doable. The nice thing, Merkel said with a grin, is that each member state sees itself as a special case. "Then they are all equal again."

Barroso promised that binding draft laws would be presented by the end of this year. However this will be made more difficult by the fact that the EU has no formal competency for energy policies. That would only exist after the new constitution treaty had been ratified, he said, adding, "With the constitution it would be much easier." Barroso intends to use today's agreement to help push forward the stalled process towards approving a constitution. The heads of government have committed themselves politically, he said.

The lack of power on the part of the Commission to implement the resolution could still turn out to be a problem. Barroso and Merkel do not have a convincing answer as to what the Commission will do should a country refuse to implement the agreement. The German chancellor said, somewhat grumpily, that she saw no reason to discuss that today.

A signal to the G8

Merkel dismissed the suggestion that the agreement was merely a watered-down compromise that puts off important questions about renewable energy. She insisted, rather, that large changes are a product of incremental steps. With the agreement on basic principles, the countries have forged a new beginning, Merkel said. They have opened a door -- now it is a matter of designing the completely new room they've entered.

Merkel also pointed out that the EU underwent a similar process with the Kyoto Protocol. First, the EU agreed to a collective reduction of greenhouse gases of eight percent before dividing up the burden among individual member states. The path towards renewable energy is based on that flexible approach. Denmark, for example, has already agreed to increase its percentage of renewable energy to 30 percent of its total energy use. Meanwhile, France will probably be allowed to include its carbon-free nuclear energy as part of its renewable energy total.

Especially important for the European heads of government is the symbolic effect that the agreement will have on the rest of the world. Merkel hopes that momentum from Brussels will carry over to the G8 conference in June, where she hopes that the United States, China and India will also be open to voluntary emissions reductions. She already senses an increased awareness of climate change among the leaders of those countries.

It's unclear, though, whether the rest of the world will really be influenced by the European climate agreement. Certainly the biggest culprits don't feel any moral pressure to change their ways. The change in tone in the US government has to do mainly with national security: America hopes to decrease its dependence on the conflict regions of the Middle East. China and India meanwhile continue to reject voluntary reductions in emissions, claiming that their economies need a fair shot at growth.

Nevertheless, Merkel and Barroso are both feeling optimistic, a sentiment that's been hard to come by recently in the self-doubting corridors of Brussels. Barroso, for his part, sees today's conference as the beginning of a "virtuous circle". And at the end of that circle, he said, they just might find a new European constitution.