"That hurts trust and it makes it difficult to build a cooperative relationship based on trust," Merkel told a news conference.

Her remarks came in reaction to Russia's decision to shut off the Druzhba ("Friendship") pipeline running to western Europe on Monday over a dispute with Belarus. Russia has accused Belarus of illegally siphoning off crude oil and the two countries have imposed punitive oil levies on each other.

The pipeline is the source of 20 percent of Germany's oil imports. Germany, Poland, Hungary, the Czech Republic and Slovakia have been affected by the shutdown.

European Commission President Jose Manuel Barroso, on a visit to Berlin, said: "While there is no immediate risk to supply, it is not acceptable for suppliers or transit countries to take measures without consultation. Of course this is a matter for concern."

An EU statement said European oil experts were due to meet on Thursday to discuss the implications of the shutdown and "to possibly explore measures in the case of any shortage of oil products." 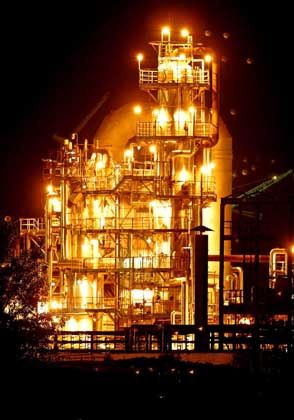 An oil refinery near the Druzhba oil pipeline in the Belarusian town of Mozyr, 350 km south-east of Minsk.

Merkel is due to travel to Moscow for talks with Russian President Vladimir Putin later this month. Putin said on Tuesday Russia may trim output, signalling his determination to force Belarus to climb down.

Earlier, Merkel indicated that Germany may rethink its plan to phase out nuclear power generation in the wake of the pipeline closure.

She said Germany must avoid becoming too dependent on single energy sources. "We therefore have to save energy, we have to develop sources of renewable energy, and of course we have to consider what consequences there will be if we shut down nuclear power stations," she told the ARD public television channel on Monday night.

The interruption highlighted western Europe's vulnerability to tension between Russia and its ex-Soviet neighbors. "This has not caused any acute threats to our energy supply," Merkel said. "But there have been transit problems again and again over the past few years. We need legal protection, and we need contract security."

Merkel's coalition partners, the center-left Social Democrats (SPD), are bitterly opposed to halting the planned phase-out of the country's 17 nuclear power plants by the early 2020s. The decision to stop using nuclear power was made six years ago by the previous government under Chancellor Gerhard Schröder, who belongs to the SPD.

Mindful of the SPD's stance, Merkel has in the past agreed to stand by the nuclear power plan. Her latest comment marks a distinct shift in tone and drew a swift rebuke from the SPD. Ulrich Kelber, deputy leader of the SPD's parliamentary group, said that the conservatives were just interested in ideology. "Someone who uses oil supply bottlenecks as an argument in favor of nuclear energy isn't capable of intellectually grasping the issue of energy supply," he said.

The Druzhba pipeline carries two-fifths of Russia's total oil exports and supplies Germany with about a fifth of its annual needs.

It has a capacity of over 2 million barrels per day (bpd), of which some 1.4-1.6 million bpd go directly to consumers in the EU, representing about 12.5 percent of oil consumption in the 27-nation bloc.