The German tabloid Bild am Sonntag called it "a fateful day for the euro." But was it? At the very least, one can say that it was an extremely hectic day for many of Europe's leading politicians.

In Athens on Sunday morning, Greek Prime Minister Georgios Papandreou announced further deeps cuts in public spending -- a package he said which involved "great sacrifices" for the Greek people. In addition to further tax increases -- beyond the VAT and luxury tax hikes announced in March -- the new package includes further pay cuts for public sector workers, pension cuts and an increase in the retirement age.

In return, the 16 finance ministers from countries belonging to the European common currency area, meeting on Sunday afternoon, finally released a far-reaching aid package for Greece following weeks of disagreement. The deal makes €110 billion ($146 billion) available to Greece in the next three years -- €45 billion in this year alone. Germany's share of the aid package is €22 billion, €8.4 billion of which is due in 2010. 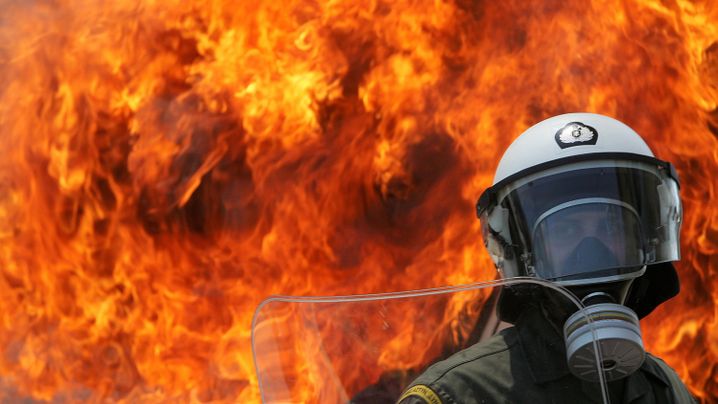 The agreement is to be rubber-stamped by European heads of state and government at a special summit on May 7. But Europe has sent a clear signal in response to the pessimism displayed by ratings agencies and the financial markets. The euro is to remain strong is the message from Brussels. And further, Greece has powerful allies.

'Better for All Europeans'

"It is our mission to defend the stability of the euro zone in its entirety," German Finance Minister Wolfgang Schäuble said. "The better we do that, the better it is for all Europeans and for Germans."

It remains to be seen just how the financial markets will react to the weekend deal. On Monday, the euro was down slightly in early trading.

Indeed, past attempts by European politicians to shore up the euro with expressions of solidarity with Greece have proven inadequate. European summits on Feb. 11, March 25 and April 11 all had little impact on rampant speculation against the euro. The inability of Brussels to calm the markets made Sunday's deal unavoidable.

The governments involved now grasp how serious the situation is. The German government too doesn't want to be accused of any further stonewalling after ratings agency Standard & Poor's last week downgraded Greece's credit rating to junk status.

Berlin is hoping to push the necessary legislation through parliament this week -- with the same sense of urgency of the banking bailout package in October 2008. President Horst Köhler is scheduled to sign the law as soon as Friday. The government hopes the speed will be seen as a further sign of strength. The opposition Social Democrats won't stand in the way of parliamentary approval but haven't yet declared whether they will vote in favor of the aid. The party wants commercial banks to foot part of the bill.

In terms of German domestic politics there's a certain irony in the fact that the emergency aid is being passed on the eve of the May 9 regional election in North Rhine-Westphalia. Critics say that is precisely what Merkel had been trying to avoid in recent months in order to keep the sensitive issue out of the election campaign. A total of 56 percent of Germans are against helping out Greece, so the aid could cost the two ruling parties, Merkel's Christian Democrats and the pro-business Free Democrats, votes in the election in North Rhine-Westphalia, Germany's most populous state.

Merkel has reason to fear the wrath of voters. She is arguing that it was her stubbornness that forced Athens to get serious about agreeing to stringent spending cuts, and that she made sure that the International Monetary Fund's hard-as-nails debt professionals were dispatched to keep an eye on the Greeks.

That may be true. But Merkel's manoeuvring may nevertheless have made matters worse. The bailout of Greece has become more expensive than initially thought because Greece's borrowing costs have risen dramatically in recent weeks. The market hysteria could spread. That is why even US Treasury Secretary Tim Geithner got involved and urged Berlin to take rapid action.

It's unclear how effective the bailout will be. Everything depends on how the economy, the government finances and political sentiment respond. Many people in Greece and around Europe are wondering how radical cutbacks with wage cuts and tax hikes are supposed to revive the Greek economy. Berlin, London and Paris have recently been rejecting spending cuts for their own countries on the grounds that such measures would throttle economic growth.

Hopes that the bailout will work have been fuelled by the surprising speed with which banks have recovered from the biggest crisis in their history. Just one year after the collapse of the financial system in 2008 they are making record profits again -- and the governments that nationalized their banks in order to rescue them can now hope for profits when they sell their stakes.

Ideally, that's also the way things should go with Greece. Germany's government, at least, is trying to win over its skeptical public with the argument that it could actually make a profit if Greece pays back all the money it is loaned. No one can really say if that will ever happen, though. Some believe it will; others aren't so sure.

The Banks Are Partially to Blame

One thing, though, is certain: Should Greece go bankrupt any time soon, it would be almost impossible to predict the consequences. Portugal and Spain would be the next ones to feel the heat. Indeed, it only makes sense for European governments to buy some time for themselves and Greece if they honestly expect that the situation will have calmed down in three years.

It makes sense to make Greece's creditors part of the solution. In interviews, Merkel and Schäuble -- both of whom belong to the center-right Christian Democratic Union (CDU) -- have suggested that they want banks to be part of the aid package for Greece. Other parties have demanded that they be forced to do so. Following the initiative of Deutsche Bank CEO Josef Ackermann, a number of German companies have now openly pledged to chip in between €1 billion and €2 billion euros -- in the form of loans and through the purchase of Greek government bonds.

One could call such a gesture "hypocrisy," as some in Germany's far left Left Party are doing, because the financial sector made a tidy profit on Greece's slide into indebtedness. It could also, however, be seen as a pragmatic contribution. More than anything, however, it is a confession that the banks are not blameless in Greece's misfortune. 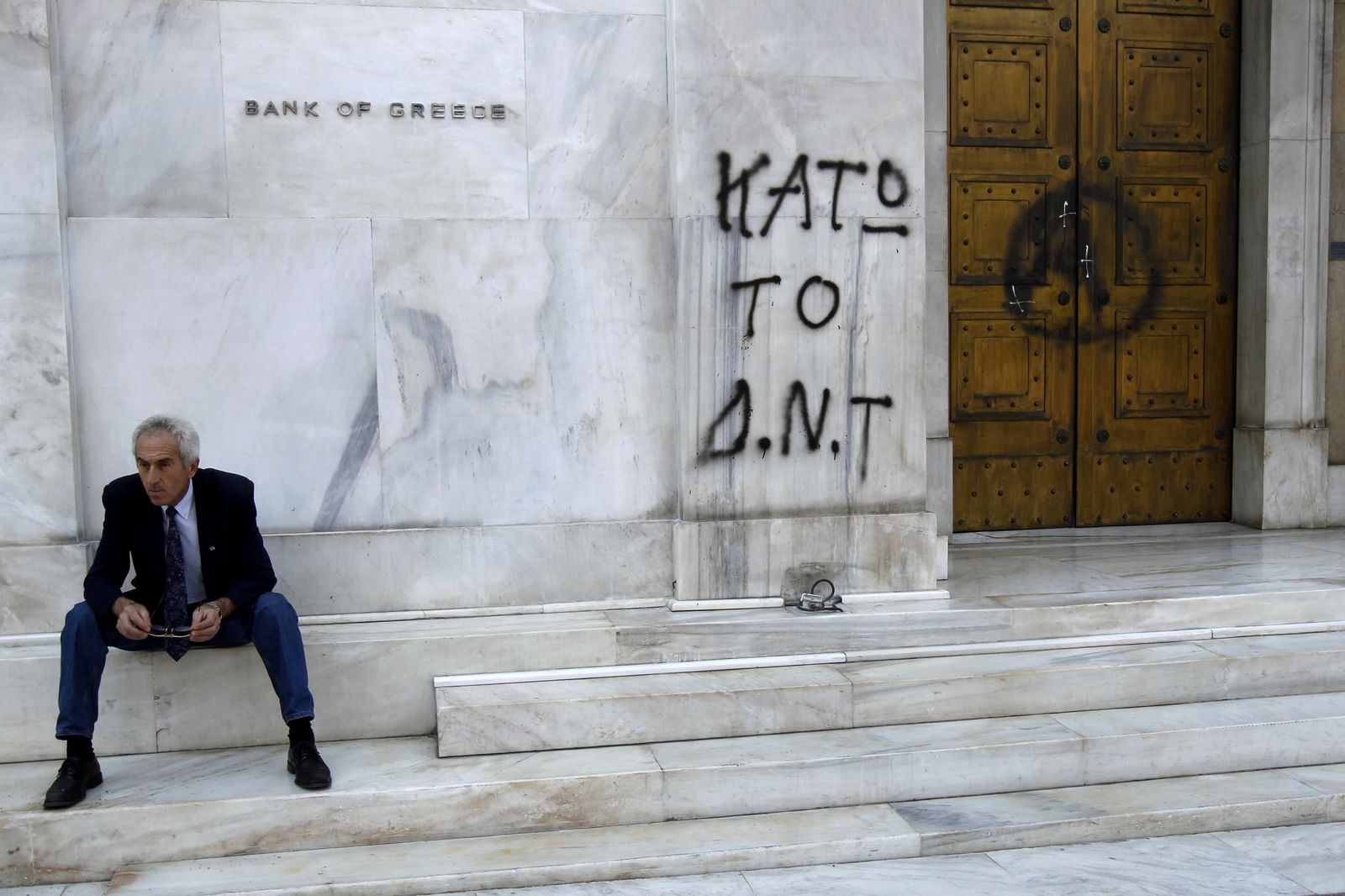 A man sitting outside the Bank of Greece next to graffiti reading "IMF Out." On Sunday, European finance ministers agreed to a bail-out package for the country.