The teenage girls and boys meet at the table tennis board in the school yard. They're carrying flowers. Some are crying; some are just staring emptily. Few have anything to say. The teenagers sign their names with black felt-tip pens on thick white candles, which they will soon set down next to the others on the steps of the Joseph König Gymnasium, a high school in Haltern am See, a town a short drive north of Düsseldorf. A school is saying goodbye and an entire city is mourning.

Sixteen students and two teachers from the school were on board Germanwings Flight 4U9525, which crashed in the French Alps en route from Barcelona to Düsseldorf on Tuesday morning. The students had spent just under a week in a town near Barcelona taking a Spanish course. A bus was ready to pick up the 10th graders at the Düsseldorf Airport, but they never arrived. "This is the darkest day in the city's history," local Mayor Bodo Klimpel said Tuesday afternoon during a press conference held at city hall.

Klimpel does not look like a man who is easily shaken. But as he spoke on Tuesday, it seemed at times that his voice almost failed him. His eyes were red and he clearly had to struggle to maintain his composure. "It's the worst thing you could imagine," he said. "Our deepest thoughts right now are with the victims and their families." 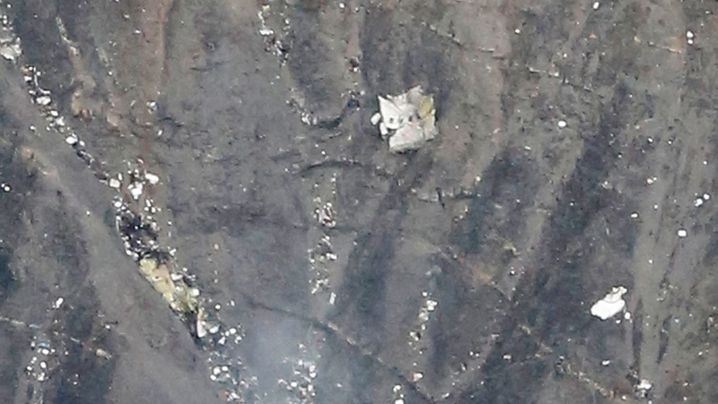 Haltern am See is a small city of 38,000 residents in the Ruhr Valley, a former coal-mining area in the populous state of North Rhine-Westphalia. The city's most famous native sons are two German professional soccer celebrities -- retired player Christoph Metzelder and FC Schalke Captain Benedikt Höwedes -- both of whom publically expressed their sorrow over the plane crash on Tuesday afternoon. "Our sympathies are with the victims of this tragic plane crash," Höwedes tweeted. "Any of us could have been on that airplane." Metzelder, who is also the chairman of the local football team, wrote: "Our thoughts are with the victims and their families."

News of the disaster quickly spread through Haltern am See. "It's such a small town that many people know each other," said a teacher at a school located next to the Joseph König Gymnasium. "We're unbelievably sad. Everyone." One young man with a red rose in his hand sought to describe his thoughts as he learned of the accident. "You just think, this can't be real -- we know these people," he said.

Many families of the victims traveled in the early afternoon to the Düsseldorf Airport in order to obtain more information about the crash, which cost the lives of 150 people, including 144 passengers and six crewmembers. German federal police and airport workers systematically shielded families from the press and public and escorted them to a special VIP lounge. "I don't want to see anyone from the press directly approach these people," a police commissioner told his subordinates, telling the officers they were directly responsible for the families.

Terrible scenes must have played out here on Tuesday in the VIP room. One airport worker said he would never forget the crying he heard on this day. Pastors, doctors and psychologists all converged on the scene to provide emergency care for families and friends of the plane crash victims.

Around 20 people had been waiting in the arrivals area for the plane's arrival when, at 11:30 a.m. joyful anticipation was replaced by dismay. Photos taken of the arrivals board at the airport over an hour after news started to emerge about the crash still showed the doomed flight from Barcelona to Düsseldorf, with no status listed about its expected arrival time.

At around that time, a man with back hair in a leather jacket was escorted by two airport employees to the VIP lounge, tears running down his cheeks. A Spaniard, he also was apparently waiting for the flight to land. At first he didn't appear to understand the helpers, but then he followed them away.

With additional reporting by Barbara Schmid.